John Tory has won the election to be Toronto's next mayor — ending the often gruelling, hotly contested race for the city's top job and the tenure of outgoing mayor Rob Ford.

Pledges to move the city 'not left, not right, but forward' 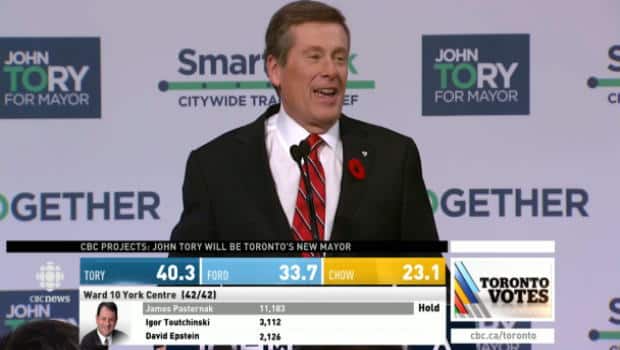 6 years ago
16:02
'Together, like never before, we now begin building Toronto the great,' city's new mayor tells a crowd of cheering supporters 16:02

John Tory has won the election to be Toronto's next mayor — ending the often gruelling, hotly contested race for the city's top job and the tenure of outgoing mayor Rob Ford.

Tory told a crowd of cheering supporters Monday night he would end the "division that has paralyzed City Hall."

"Together, like never before, we now begin building Toronto the great," Tory said, adding he will lead the city "not left, not right, but forward."

"We are going to build a strong, inclusive city of opportunity from Etobicoke to Scarborough and from North York right to the waterfront."

The 60-year-old longtime political figure will be Toronto's 65th mayor.

Tory's support was concentrated close to the city centre, while Ford fared better in suburban Etobicoke and Scarborough. Tory's share of the vote is less than the 47.1 per cent Rob Ford drew when he won the 2010 election, but well ahead of Tory's 38 per cent when he lost to David Miller in 2003.

Ari Goldkind, the Toronto lawyer who drew attention as an outspoken, long-shot candidate in the closing weeks of the election, came in fourth with just under 4,000 votes, or 0.4 per cent.

Ford congratulated Tory in a speech to supporters, while touting his and his brother's accomplishments over the past four years.

​"I know this is not the result all of us wanted tonight, but I also have the satisfaction of knowing we ran an absolutely phenomenal campaign and we gave it our all," Ford said.

"We did not have deep pockets and we only had six weeks … but together we have changed the political landscape in Toronto."

Ford said he would continue to fight on Toronto's behalf as a businessman.

"I will go to sleep tonight knowing I gave it absolutely everything," he added.

​Chow, once seen as the front-runner in the early days of the campaign, congratulated Tory as she conceded defeat in a speech to her supporters — touching on many of the issues that defined her campaign.

"John, you just been given a chance do something about it. I sincerely wish you all the best as our mayor."

Polls closed shortly after 8 p.m. ET in the election, one of the most anticipated and most talked-about votes in Toronto history, which marks the end of Rob Ford's tumultuous time in office.

CBC News also followed the races for Toronto city council, for school trustees and mayoral races elsewhere across the province, including Mississauga, Brampton, Hamilton and Oshawa.

Rob Ford, who is returning to hospital for another round of cancer tests on Wednesday, dropped out of the race for mayor but was re-elected to his old council seat in Ward 2.

Ford's single, scandal-plagued term as mayor garnered national and international headlines when he admitted to having smoked crack cocaine while in office. His term was marked by other erratic behaviour, numerous legal woes and a stint in rehab.

Ford commended his brother in a victory speech to supporters, and hinted that the Ford family would try again for the mayor's office in four years.

"My brother did a phenomenal job," Ford told a crowd of supporters. "If you know anything about the Ford family we never, ever, ever give up."

In all, 65 candidates were hoping to succeed Ford as mayor, though going into the election the polls had Tory in the lead, followed by Doug Ford.

Tory campaigned on the promise of a new era of co-operation and consultation after the divisive Ford years. The former CFL chairman and senior telecommunications executive has pledged a return to stability and civility at city hall.

Chow, 57, widow of the late federal NDP leader Jack Layton, began the race as perceived front-runner and campaigned as the "only progressive" candidate. However, polls suggested she failed to capitalize on her initial popularity and would fall victim to strategic voting from those seeking to ensure the end of the Ford era.

Doug Ford, 49, who only joined council four years ago, tried to cast himself as the natural successor to his brother — while also distancing himself from the excesses.