A witness to a fatal three-vehicle collision suggests that distracted driving may have been a factor in the crash, which injured 12 people and killed a TTC bus passenger waiting to disembark.

A dozen people taken to hospital after collision involving TTC bus, 2 other vehicles 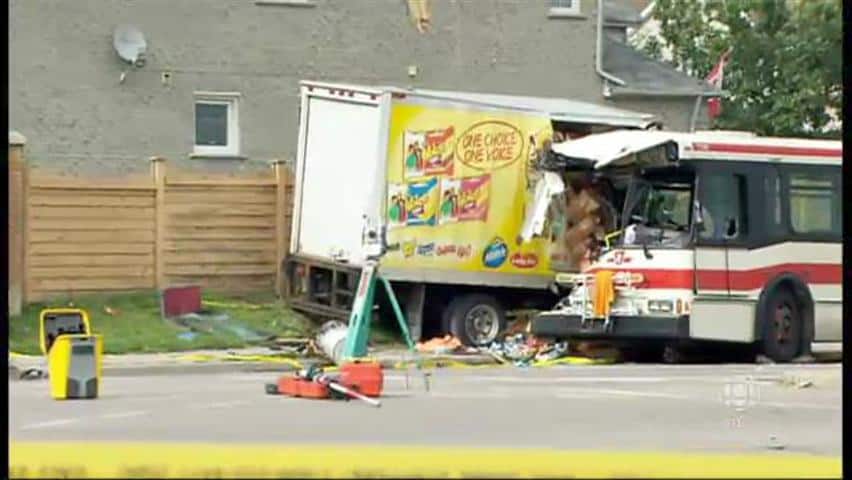 7 years ago
2:51
A female bus passenger was killed Monday after a three-vehicle collission 2:51

A witness to a fatal three-vehicle collision suggests that distracted driving may have been a factor in the crash, which injured 12 people and killed a Toronto Transit Commission bus passenger waiting to disembark.

Police said the crash happened just after 11:30 a.m. Tuesday in east Toronto, near the intersection of Middlefield Road and Steeles Avenue. A cube van could be seen tangled with the bus in the wreckage. The female bus passenger who died was in her 50s, according to Emergency Medical Services.

Karan Shetti was a passenger in a vehicle that was parked beside the TTC bus.

He said he witnessed the driver of the truck on a cellphone moments before the fatal collision.

"I saw him in the intersection on the phone," Shetti said. "And I went behind [the truck] and he was still on the phone and there was a lady beneath the truck.

"I don’t know how I’m going to cope with this."

Police confirmed the woman killed was a passenger waiting to exit the bus, and that the bus was stationary when the collision happened.

Emergency Medical Services told CBC News that a dozen people were transported to various hospitals from the scene. One person was in life-threatening condition, two were in serious condition and nine others suffered various minor injuries.

Ramesh Lall, who also witnessed the crash, said he's seen numerous accidents at the same intersection. But none has ever been this bad.

"People just hurry to get to where they went to go, especially in the afternoon," he said.

Lall said Tuesday's crash happened right in front of his eyes, and that he also saw the victim.

"I could see she was breathing her last breath," he said.

TTC spokesman Brad Ross said via Twitter that the bus operator was removed from the damaged bus using the Jaws of Life and taken to hospital as a precaution, but was OK.

Andy Byford, the TTC’s chief executive officer, told reporters at the scene that the crash was "a very serious and shocking incident."

Byford said he has been told that there were a number of witnesses to the crash, which should help police determine the sequence of events.

"I think we’ll get to the bottom of what happened very quickly," he said.

Byford said the bus driver was put into a neck brace. His wife had been notified about what had happened and was en route to hospital.

"My understanding is that he’s been with us for six years," said Byford, who declined to identify the driver.

There were five fire trucks on scene and power lines were down. The crash caused a power outage that affected about 5,000 customers in the afternoon, but power has been restored.

Two years ago, a passenger died when a TTC bus collided with a flatbed truck on Lawrence Avenue East.

The bus driver in that August 2011 crash was charged with criminal negligence causing death and possession of cannabis. The victim’s family later filed a $4.25-million lawsuit against the TTC.

Police say there have not been any charges laid in this crash.