Toronto Mayor John Tory says city staff have been forced to contemplate "terrible and devastating" service cuts to the city's transit, shelter, emergency, shelter, and child-care services, painting a grim financial outlook for Toronto if other levels of governments don't commit to funding.

Toronto Mayor John Tory says city staff have been forced to contemplate "terrible and devastating" service cuts to the city's transit, shelter, emergency, and child-care services, painting a grim financial outlook for Toronto if other levels of governments don't commit to funding.

But although the mayor says he has seen progress with provincial and federal officials, who are in "talks" about a financial plan for Ontario cities, there has been no firm commitment.

"I have been working non-stop to bring this to the attention to the other governments," Tory said at a news conference on Friday. "That work will continue."

According to the city's calculations, service cuts would include:

Additionally, Tory said some library branches would be forced to close and the subsidy for Toronto Community Housing would have to be reduced.

Those cuts, Tory said, would force the city to consider putting as many as 19,184 employees out of work. 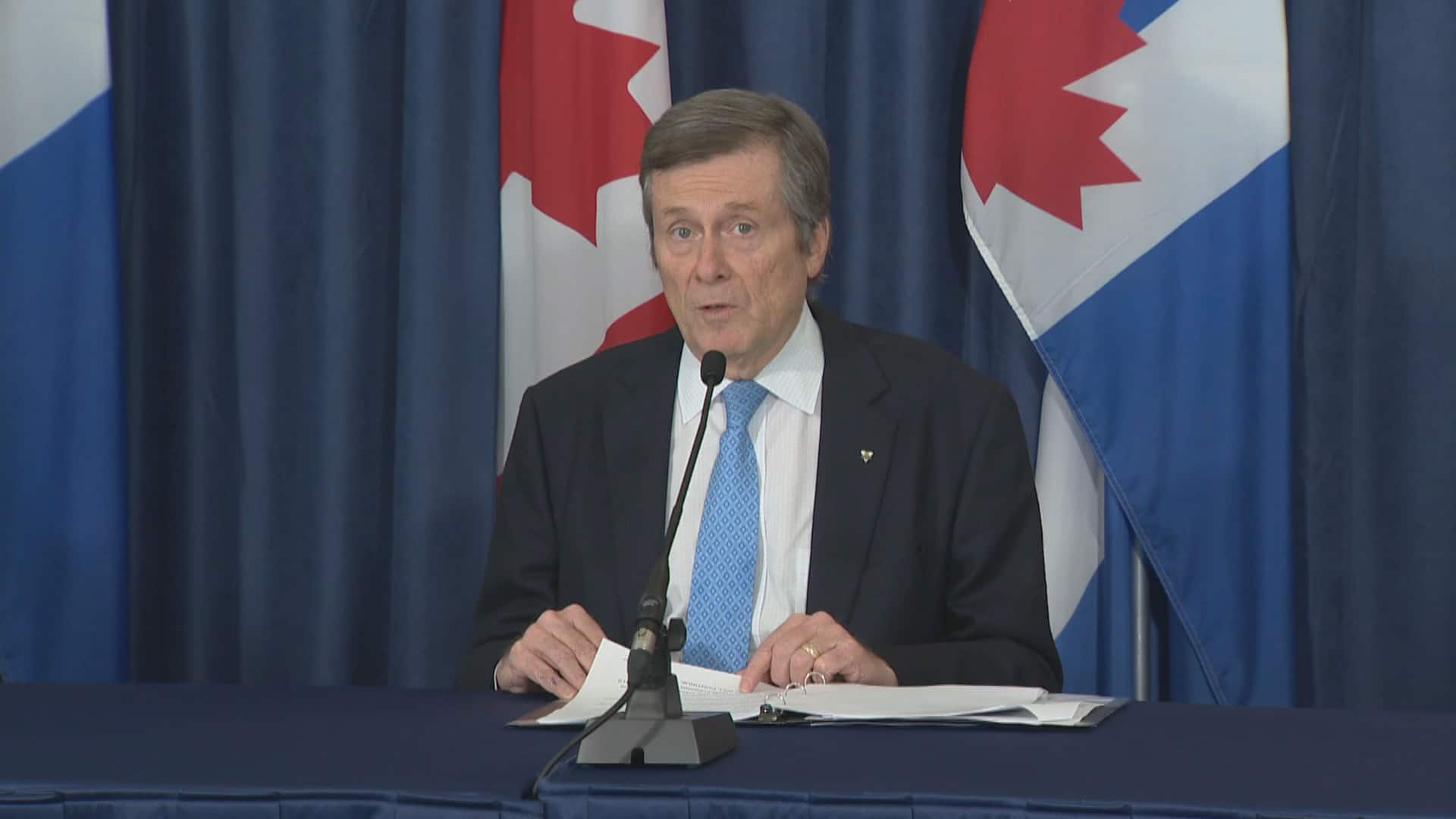 9 months ago
0:48
Toronto Mayor John Tory speaks to the city's need for immediate financial relief from the provincial and federal governments. 0:48

"Toronto is Canada's economic engine. We are ready to rev up, but we cannot stall," Tory said.

"And that is what is at risk if federal and provincial governments don't come to the table with immediate support."

The province, meanwhile, says it has established a "technical table" with the Association of Municipalities, tracking costs and revenue shortfalls associated with COVID-19 to understand how to support Ontario cities.

"We know that municipal revenues are impacted by the current situation, and we have joined our municipal partners in calling on the federal government for emergency funding," according to a statement issued Friday from the office of Ontario's Municipal Affairs Minister Steve Clark.

"Given the national scale and magnitude of the shortfalls facing Canadian municipalities, it is imperative that the federal government join us in developing a plan to help our municipalities recover from the impacts of COVID-19."

Toronto Public Health said it confirmed 258 new cases on Friday, marking the third day in a row new cases have increased in the city.

On Friday, the province confirmed 441 new COVID-19 cases despite completing just 11,276 tests. It's unclear at this time how many of those cases are in the city and surrounding area.

Here's a look at other key data points from the city:

The city says some 14 per cent of those who have been infected with the novel coronavirus have needed to be hospitalized.

The partnership with the Registered Nurses' Association of Ontario (RNAO) will allow the city to hire registered nurses to support case and contact management, which the city says is needed to understand how COVID-19 is circulating.

Toronto has not said how many nurses it intends to hire and the new jobs are expected to last three months. The nurses will also support general public health work as part of the new agreement.

"This new partnership will help public health continue to ramp up its ongoing efforts to protect our residents and quickly track down people who may have been exposed to COVID-19," said mayor John Tory in a statement.

City to close additional roads this weekend for ActiveTO

The news comes as the city prepares to close additional roads this weekend for its ActiveTO program, which involves creating 57 kilometres of "quiet streets" to promote outdoor activity while maintaining physical distancing measures.

The following roads will be closed from Saturday at 6 a.m. to Sunday at 11 p.m.:

The streets will still be open to local traffic, runners, walkers, and bikers.

Tory also announced earlier this week that city staff have begun to remove tape from more than 850 parks amenities that had previously been closed due to COVID-19.

As of this weekend, picnic shelters,150 basketball courts, more than 300 baseball diamonds, more than 300 soccer and multi-use outdoor fields, as well as 600 tennis courts at 185 locations will reopen across the city.

The reopening of parks amenities will continue next week when staff work with Toronto Public Health to open lawn bowling facilities and outdoor bocce courts.

People may use outdoor sports facilities and multi-use fields for individual activities such as walking, running, biking, skateboarding, frisbee, kicking a ball, and low contact racquet sports such as tennis, badminton, pickleball and ping pong.

The message from public health officials, meanwhile, remains the same: keep two metres away from others as much as possible, wear a mask or other face covering if you can't maintain that distance, wash your hands often or use an alcohol-based sanitizer if you're out and avoid close contact with anyone who is sick.

If you feel sick, stay home.

"Do not host or participate in gatherings this weekend," Dr. Eileen de Villa, the city's medical officer of health, said at the news conference Friday.

"We must stay the course so we can get to a point where we connect safely in person."

De Villa added that the city plans to look into whether or not an increased mixing of people, specifically around milestones, have or will result in a spike of new COVID-19 cases in Toronto.

"Our analysis thus far suggests that people may have acquired the virus during recent events where people traditionally spend time with their families, like Mother's Day."

When asked on Friday if he thought Mother's Day may have played a role in Ontario's rising numbers, Williams responded saying he didn't think Mother's Day itself was a factor but that people may have been more "casual" over the last few weekends than he would have liked.