A Toronto couple has found a collection of letters that appear to have been penned by a soldier during the First World War. 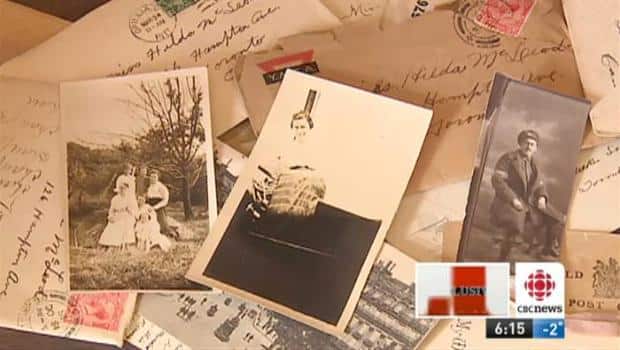 8 years ago
2:22
A Toronto couple found a box of letters dating from the First World War. 2:22

A collection of letters, photos and postcards dating back to the First World War has turned up in a Toronto home.

If you can help identify the people in the letters, please drop Genevieve Tomney an email at genevieve.tomney@cbc.ca

Joel Cormier and Ashley Cameron found the letters in a box in their attic a few weeks ago.

The dozens of letters and postcards that have resurfaced were sent to a woman named Hilda MacLeod decades ago.

They appear to have been sent by a soldier named N.E. Waring, who describes the horrors of war to the woman receiving the letters.

Cormier and Cameron are hoping to return the letters to relatives.

Click on the video above to see a full report from the CBC's Genevieve Tomney.