Toronto's ban on plastic bags will go ahead as planned in the New Year. 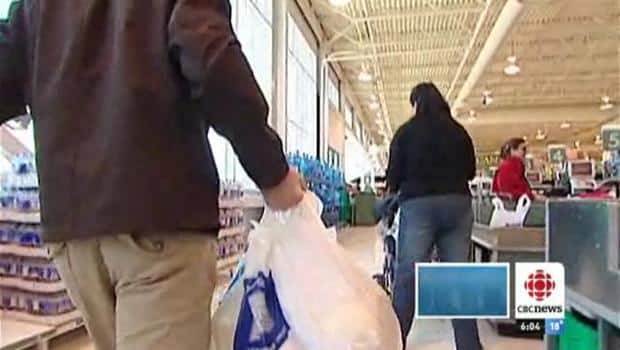 8 years ago
2:27
An effort to reopen debate on Toronto’s bag ban was quashed Wednesday. 2:27

Toronto’s ban on plastic bags will go ahead as planned in the New Year.

A motion was introduced to reopen debate on Toronto’s pending plastic bag ban, which will come into effect on Jan. 1.

But the motion failed to net the two-thirds of council votes necessary to reopen the debate on Wednesday afternoon.

Ahead of Wednesday’s vote, Coun. Denzil Minnan-Wong had predicted the motion to reopen debate would be a tough measure to achieve.

The decision to ban plastic bags occurred earlier this year, when council voted on a surprise motion that Coun. David Shiner introduced in June.

As of Jan. 1, retailers will be prohibited from giving customers "single-use plastic carryout [shopping] bags, including those advertised as compostable, biodegradable, photodegradable, or similar," according to the text of the ban that council passed four months ago.

The move was controversial, with critics suggesting that it could have problematic consequences if it comes into effect.

Some industry stakeholders have threatened legal action if the ban goes ahead as scheduled.

Coun. Giorgio Mammoliti, who voted in favour of reopening debate, told CBC News that councillors "understand that this thing, if it’s taken to court, we have the potential to lose this thing."

Following the vote, Coun. John Parker suggested the vote that scuttled further debate was even more surprising than the vote that prompted the ban in the first place.

"What is harder to fathom: voting to ban plastic bags without taking advice, or taking advice and voting not to reconsider the ban," Parker said on his Twitter account.

Parker was also one of the 27 council members who voted in favour of reopening debate on the bag ban.

With a report from the CBC's Steven D'Souza