Cycling is quickly becoming one of the most popular forms of transportation in downtown Toronto, and as a result, the need for more bike lanes on major routes is also growing. But bike lanes can have a completely different layout and different rules, depending on where you are.

There is no consistency when it comes to bike lanes in Toronto, Sgt. Jeff Zammit says

Cycling is quickly becoming one of the most popular forms of transportation in downtown Toronto — and it's driving up demand for more bike lanes on the city's major routes.

Zammit has been patrolling the streets on his bike for more than 20 years. He even relies on bike lanes to get to a crime scene more quickly, he said.

To help less seasoned cyclists navigate the city's bike lanes, Zammit agreed to let CBC Toronto ride along with him.

Zammit began his tour with the designated lane on College Street that runs between Manning Avenue and Bay Street, which takes commuters through the University of Toronto and just north of the central business district.

But there's often confusion, because the bike lane is sandwiched between the street on the left and a row of parking on the right, the officer said.

Cars can drive through the bike lane to get to the parking spots, but it's illegal to stop in the lane itself.

That said, Zammit pointed out several drivers sitting in the bike lane waiting for a spot — and ignoring the cyclists swerving around them.

Lina Pires said she didn't know about the violation when she parked her car in the bike lane to run into a buildings.

"Now I do," she said, after earning a warning from Zammit. 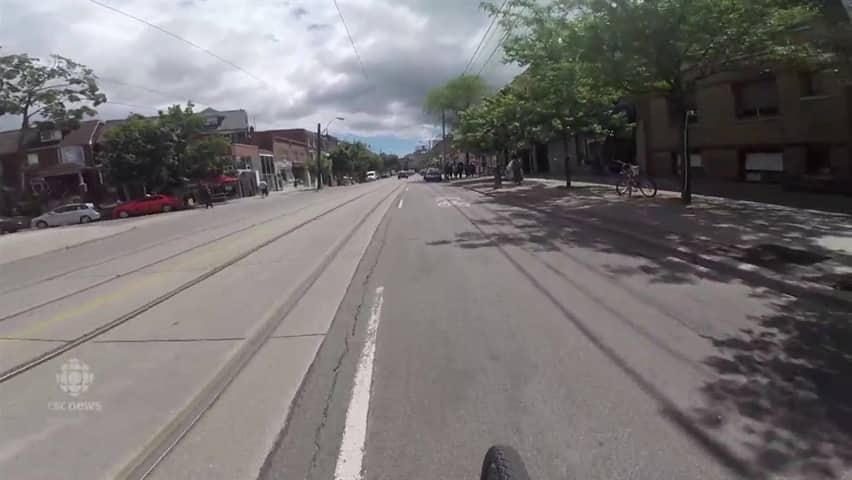 3 years ago
0:08
Toronto police Sgt. Jeff Zammit nearly gets doored by a man getting out of a van on College Street. 0:08

Zammit was also very forgiving when another motorist opened his car door into the bike lane without looking.

"If I wasn't paying attention, I would have got smoked for sure," the officer said.

The cost of dooring is a $365 fine and three demerit points and if someone is injured or killed, those in the car could face a lawsuit.

Zammit suggests that drivers always use their right hand to open the door.

"That means you've got to swing over to get to the door handle [and] you're actually going to be physically turning your head to see if there's any cyclists coming."

Like its counterpart on College, the bike lane also runs along a row of parked cars — but, in this case, the parking acts as a barrier and separates the bike track from traffic.

Drivers trying to turn onto Bloor, meanwhile, have to creep up to see around the parked cars. As they wait for a safe opportunity to turn, they often block the bike lanes there and frustrate cyclists.

Looking for the safest place to cycle?

Zammit says two of the best routes in the city are on Richmond Street heading west and Adelaide Street running east, between Bathurst and Parliament streets.

The one-way streets have designated bike lanes, lined with poles to ensure to keep cars out.

"It's added protection for cyclists and it tells a motorist it's a no-go," Zammit said.

The only place a car can actually enter these lanes is when approaching an intersection if the driver needs to turn right. A broken line at the intersection indicates cars can merge, but the cyclists have the right-of-way.

Despite that, Zammit advises cyclists to keep an eye out.

"If you get hit, you're not going to win," Zammit said. 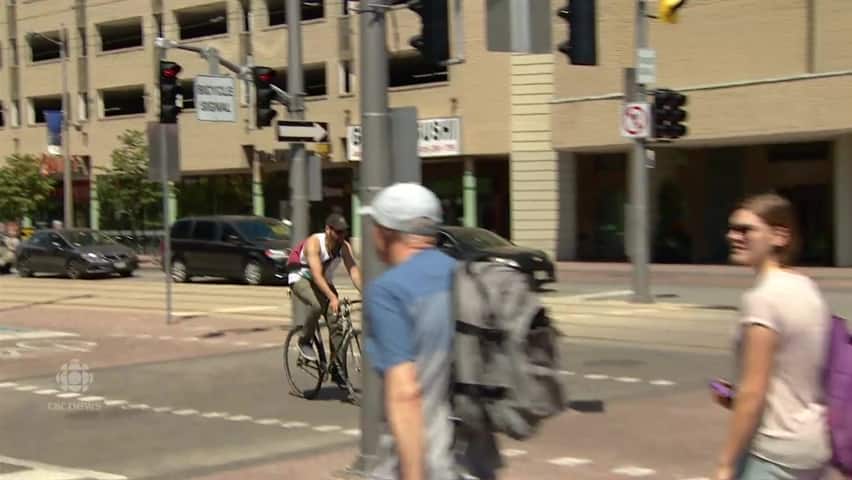 This cyclist gets pulled over for running a red light

3 years ago
0:21
Chris Ioannou runs a red light on the Queens Quay recreation trail and is pulled over by Sgt. Jeff Zammit. 0:21

Queens Quay has a multi-use path that between Parliament Street and Stadium Road, which is separated from the main road by streetcar tracks.

Zammit said there are issues here that need to be made safer.

For example, there are several intersections where the paved path ends, forcing cyclists to drive over cobblestones often crowded with pedestrians.

And although there are stoplights for cyclists, not everyone follows them, Zammit said.

"It's not an excuse, but if there's nobody coming the other way, generally cyclists have a tendency to sort of blow through red lights and stop signs," said Chris Ioannou who had done just that before being pulled over.

He said he didn't realize, however, that the penalty is same as it it would be if he were driving a car: a $350 fine.

Zammit told Ioannou to brush up on the rules of the road, something the officer suggested other new cyclists do as well.