Toronto city council voted 24-20 on Wednesday to ban the use of plastic bags outright by 2013. 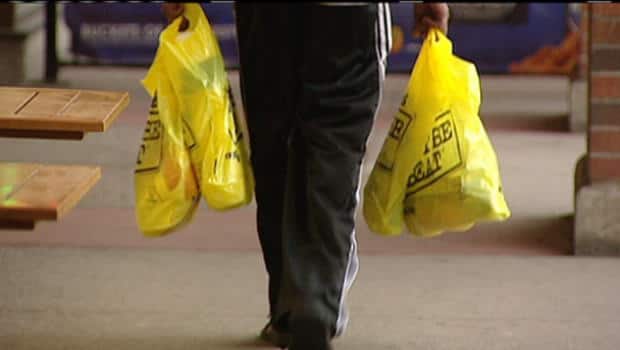 9 years ago
2:56
A majority of Toronto councillors decided to kill a bag fee by July 1, but Willowdale Coun. David Shiner then made a motion to eliminate plastic bags altogether by Jan. 1. His motion passed 24-20. 2:56

Council had spent Wednesday at city hall debating whether to eliminate a mandatory five-cent bag fee that Mayor Rob Ford had wanted axed.

A majority of councillors decided to kill the bag fee by July 1 of this year, but Willowdale Coun. David Shiner also made a motion to eliminate plastic bags altogether by Jan. 1. His motion passed 24-20.

"It's better than just trying to get rid of the fee; it's getting rid of the bags," Shiner said.

Shiner said he wasn't planning on moving a motion to ban plastic bags until he saw it might pass. "It's the most progressive move that this council's ever had," he said, adding that retailers should provide paper bags free of charge.

The mayor portrayed the outright ban as a victory. "We got rid of the bag tax; it's what people wanted," he said.

Ford and some councillors had argued that the $5 million retailers earned annually from the fee wasn't going to any particular environmental group and had served its purpose, cutting plastic-bag consumption in half.

The mayor believes the ban will face legal hurdles.

"I don't think it will be upheld in court," he said. "A judge will just say, 'You can't tell these people they can't give out plastic bags or sell plastic bags.' To me it's ludicrous."

Los Angeles and Seattle are among the other North American cities that have taken similar approaches. Shiner said he got the idea from Seattle's recent ban.