As the Progressive Conservatives urge the governing Liberals to encourage more Ontario students to consider a college education, the Official Opposition is getting pushback over its proposal to scrap a tuition-grant program. 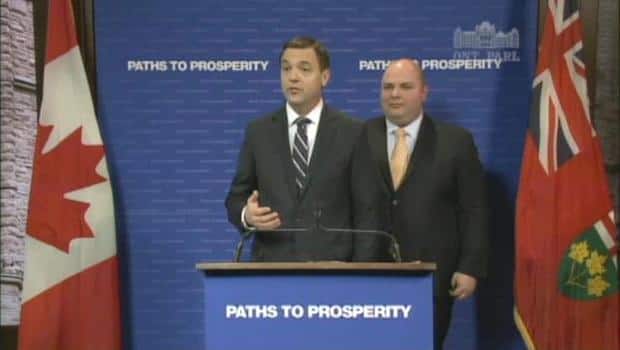 As the Progressive Conservatives urge the governing Liberals to encourage more Ontario students to consider a college education, the Official Opposition is getting pushback over its proposal to scrap a tuition-grant program.

On Tuesday, the Tories released the latest in a series of their "Paths to Prosperity" discussion papers, which outline what the party describes as "ideas for a better, stronger Ontario."

The latest paper, "Paths to Prosperity: Higher Education for Better Jobs," calls for the adoption of a "college first" strategy  that will give Ontario students more flexible options to pursue their post-secondary education at a reduced cost.

In introducing the paper on Tuesday, Progressive Conservative Leader Tim Hudak said that Ontario students need to be better prepared for a modern economy, but they are increasingly paying more money for a less effective education.

In particular, the Tories say that too many students are going to Ontario universities, as a result of "unfettered enrolment growth" that is eroding quality.

Hudak said that's why the Tories are recommending changes to the province's post-secondary system, which include encouraging high-school students to seek a college education if that would better fit their needs.

"We're going to bring in a colleges first strategy, enhancing applied learning options in a direct connection to good jobs," Hudak said during a news conference in Toronto on Tuesday morning.

Hudak said that the Tories would like to see colleges providing a greater array of applied, three-year degrees and they would like to make it easier for high-school students to pick up credits that will also count at college.

The proposed changes are aimed at giving Ontario students more paths to enter the college system, as well as ways of transferring into university programs if they later choose to do so.

"A purposeful evolution in our post-secondary education system has the potential to do more for the long-term health of Ontario than any other program or any other policy," Hudak said.

The Tories are also critical of a 30 per cent break on tuition that the governing Liberals have recently offered, claiming that two-thirds of Ontario students are not eligible for it.

As an example, PC critic Rob Leone told reporters Tuesday that the current tuition grant is not available to single parents returning to school.

Instead, the Tories say that the current tuition-grant program should be replaced with a system that appllies to all "qualified" students who show progress in their academic studies and career aspirations.

But Brad Duguid, the newly minted minister of training, colleges and universities, is not entertaining the idea of scrapping the tuition grant.

While Bisson said the Liberal government's tuition break may not be perfect, it is an improvement.

"This is a meagre step — it was not the step that we wanted, but at least it was a step forward," he told reporters at the legislature on Tuesday.

"So, at the very minimum, I would hope that it would stay in place."

With files from the CBC's Mike Crawley and The Canadian Press