TO2015 Pan Am Games torch unveiled in Toronto

Triathlete Simon Whitfield and Pan Am Games organizers showed off the torch that will travel throughout Canada and Ontario ahead of this summer’s games. 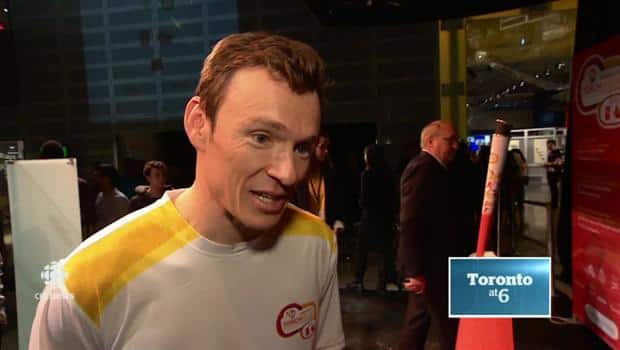 6 years agoVideo
3:00
The torch for the Toronto-hosted Pan Am Games has been unveiled. 3:00

Triathlete Simon Whitfield and Pan Am Games organizers showed off the torch that will travel throughout Canada and Ontario ahead of this summer’s games.

The torch, designed in orange and white and bearing the iconography of the competition's events, was unveiled at a special Monday morning ceremony at the Ontario Science Centre.

Whitfield, who was a torchbearer at the Vancouver Olympics, told the audience he was as nervous about carrying the torch as he is before his own races.

Ahead of the event, Whitfield told CBC News the ceremonial flame is an important part of the Games for both the athletes who are competing and those who are training with the hopes of one day making it there.

“That lighting of the cauldron really symbolizes all of that,” he said.

Whitfield captured a bronze at the 1999 Games in Winnipeg before going on to win gold and silver medals at the Sydney and Beijing Olympics.

The 41-day torch relay is set to stop in several provinces, but will mostly focus on Ontario where it will go everywhere from the Nipigon to Toronto to Point Pelee. In total, the torch — which will be lit from the Games flame currently burning in Mexico — will visit 130 communities.

Some 3,000 torchbearers are set to carry the torch throughout it’s more than 5,000-kilometre long journey.

Who gets the ultimate honour of lighting the TO2015 cauldron will be kept a mystery until closer to the Games.