A Toronto professor of Indigenous visual culture is redefining what it means to appropriate by taking a popular Toronto clothing slogan and recasting it in Mohawk terms. 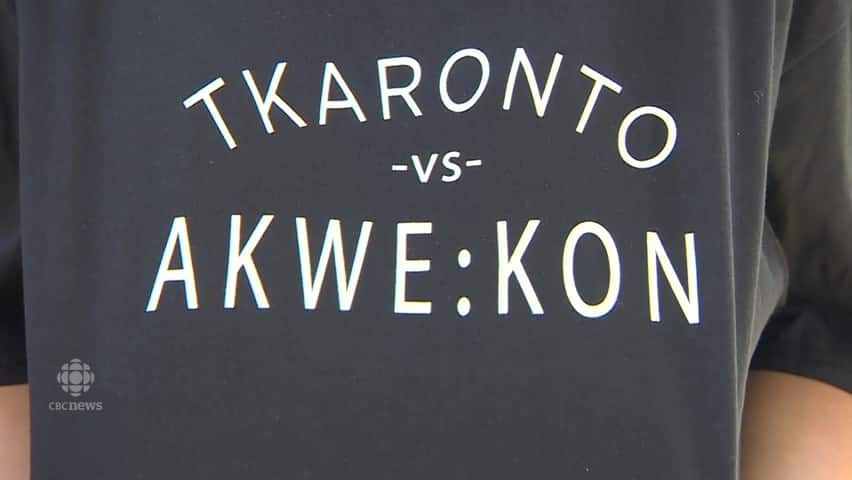 Toronto vs Everybody t-shirts translated into Mohawk

4 years ago
0:51
An OCAD university student discusses Toronto vs. Everybody t-shirts translated into Mohawk. 0:51

A Toronto professor of Indigenous visual culture has pulled off a bit of reverse cultural appropriation by taking a popular Toronto clothing slogan and recasting it in Mohawk terms.

You've probably seen shirts and sweaters bearing the words "Toronto vs. Everybody," being worn across the city. The shirts shot up in popularity last fall after Toronto Blue Jays right fielder Jose Bautista wore one of the sweaters made by the clothing company Peace Collective after hitting a home run.

But OCAD University professor Ryan Rice has put an Indigenous spin on the shirts with the Mohawk language version "Tkaronto vs Akwe:kon," a move he hopes will spark a conversation about the city's Indigenous history.

"Because it's familiar and we're appropriating the shirt, people double-take and sort of wonder, 'What does that mean?'" he told CBC News.

Provoking that question is exactly what the shirts are meant to do, he says.

"We see a lot of things from us taken," Rice said. The shirts, he says, are a way of taking something non-Indigenous and playing with the idea of claiming. "We're reappropriating and Indigenizing through this art."

OCAD student Kaiatanoron Bush says the shirts are part of a larger "Indigenous awakening" happening across the city and beyond. On Friday, for example, new Anishnaabe-language signs went up on four well-known streets as part of an effort to remind the public of the city's Indigenous history.

"A lot of people say Canada doesn't really have a culture …. That's simply not true," she said.

"Toronto is a traditional territory. We've had people who have been here for thousands of years, and it's important to know that."