​Dinnie Greenway loves riding horses, and she's not letting a little thing like age stop her. The 96-year-old says horseback riding is an addiction that has kept her going her whole life.

'I don't drink or smoke but I do have horses. This is always going to be my addiction'

​Dinnie Greenway loves riding horses, and she's not letting a little thing like age stop her. The 96-year-old says horseback riding is an addiction that has kept her going her whole life.

Greenway figures she was on a horse before she could walk and even before that, as her mother rode sidesaddle while pregnant with her in 1920.

"I have no idea how many horses I've ridden. I just keep riding them," said the London, Ont., woman, sitting astride a tall chestnut horse in a dirt riding ring. 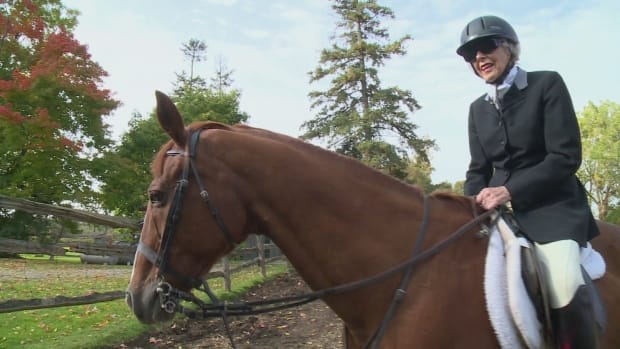 4 years agoVideo
0:46
Dinnie Greenway has been riding horses her whole life and a little thing like age isn't stopping her. The 96-year-old London, Ont., woman still rides horses at the farm her family has owned since the early 1800s. 0:46

Greenway says she feels most comfortable in the saddle and that is what motivates her to ride through the fields around the farm her family has owned since the early 1800s, which is located on the northernmost edge of London.

"As soon as my muscles get unstiffened, I shall do a lot more," says Greenway who recently pulled a hip muscle, though not as a result of riding, but a slip in the house.

Greenway's horse is seemingly unaware that his rider is not as flexible as usual, breaking into a trot and then a canter almost as soon as the pair set out from the barn.

Her 27-year-old mount, Randule, is enthusiastic but sensible, Greenway says, noting that he also prefers to act younger than his age. Twenty-seven is considered quite senior in horse years.

"I trust him completely and he knows I wouldn't put him over a fence he couldn't do. He enjoys it as much as I do."

Greenway, who is still known to gallop up to a jump when out riding cross-country, bred Randule as well as others in a line that goes back nine generations.

"The smart horses are the most fun. They test you, but it's worth it when you finally get through to them."

A young colt bucks and gallops in a field next to where Greenway rides, the latest addition to her horse family. She promises it won't be the last.

Greenway was one of Canada's first female riders to make her mark as a competitor and later as a judge on the international equestrian stage.

At 16, she recalls training horses at the 1936 Olympics where her eyes were opened to the horrors of the upcoming war.

"Hitler made his terrible speech and that afternoon Jesse Owens won and we all cheered, and I thought, I will never forget this," she says, the details still vivid 80 years later.

Greenway says her love of horses allowed her other opportunities to see the world and to compete, including winning the first modern-day show jumping competition at Toronto's Royal Winter Fair in 1949.

"Riding is the only sport where women and men compete on an even keel," she says, laughing at the suggestion that the horse does all the work.

"Being on something so big, there is no way you can be in control if they are not happy. You need to learn to be patient."

Greenway has had her share of falls, an inevitability for most riders, though she says she is doing her best to avoid a tumble these days.

She has broken her neck twice but has no residual problems, she says.

"I think muscles and tendons take a lot longer to heal, especially when you get so old," she chuckles. She understands some people are afraid of horses but says the trick is to treat them like people.

"If they step on you, it will hurt but if you are sensible and you are kind, they'll be kind to you."

Greenway has survived three husbands but doubts she will remarry, as she says she continues to be attracted to older men who are increasingly hard to find.

Instead, as she nears centenarian status, she plans to make horses the constant factor in her life.

"I don't drink or smoke but I do have horses. This is always going to be my addiction."

When asked how long she plans to keep riding, her tone suggests she has answered the same question many times before.

"If discretion were a part of valour, I probably wouldn't be riding at all," she says with certainty. "But I like riding, they're my horses and I am going to keep doing it until I can't any longer."

There's only one thing that could get in the way of Greenway's plans and that is progress.

Right outside her driveway, a subdivision is being built and the fields she knows so well on horseback are now driveways. 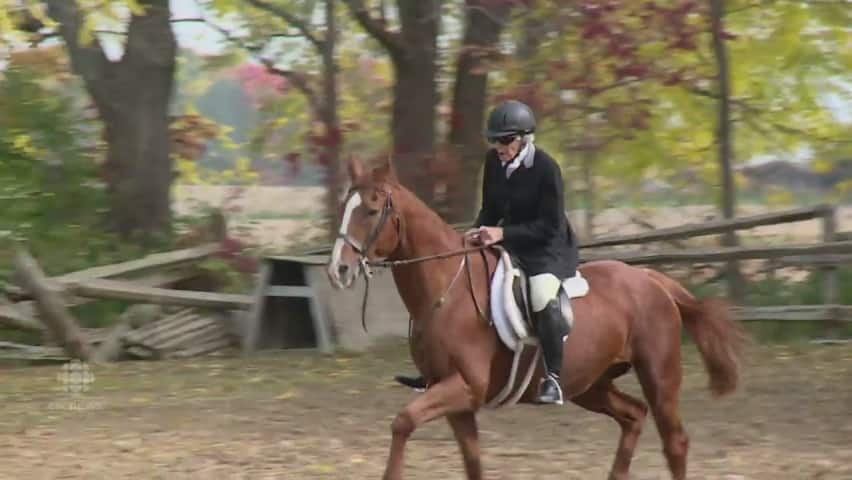 Could you ride a horse like this 96-year-old? Dinnie Greenway's been in the saddle her whole life

4 years agoVideo
1:05
​Dinnie Greenway loves riding horses, and she's not letting a little thing like age stop her. The 96-year-old talks about what she's learned from a lifetime of riding and training horses. 1:05

Greenway says she sold her land to the developer a few years back in a life tenancy agreement which means it remains hers until her death.

"[The developer] calls me regularly to ask how I am doing and I say, 'Fine, thank you very much,' and I can always hear a disgruntled sigh."