A 14-year-old girl helped a woman and a young child to safety after a fire and apparent explosion destroyed one home and damaged another in Brampton Monday night.

Neighbours told CBC News they heard and felt an explosion 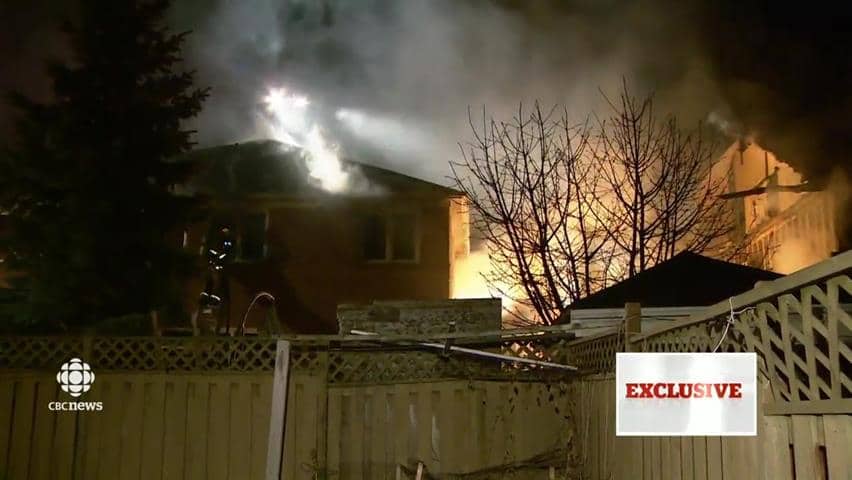 6 years agoVideo
3:39
14-year-old girl helps mother get to safety after a house explosion in Brampton. 3:39

A 14-year-old girl helped a woman and a young child to safety after a fire and apparent explosion destroyed one home and damaged another in Brampton Monday night.

Muneera Abdul-Hakeem was watching TV in her family home on Coachwhip Road, near Bramalea Road and Bovaird Drive, when she saw a column of flames rising from a neighbouring house.

When she realized what was happening, she rushed out and headed toward the property. It was there she saw a woman and a baby running from the flames.

"I smelt ashes and smoke everywhere, so I went outside ... Then I saw the lady with the baby with her and I knew the baby was in trouble, especially with the smoke," she recalls.

Abdul-Hakeem took the baby and whisked her inside as the woman jumped the fence to safety. Her father then brought the woman and baby inside to make sure they were uninjured, and then notified police.

"Life is something precious, you cannot buy life, so I wanted to save her and her baby," Abdul-Hakeem said.

The woman and child were treated in hospital for minor smoke inhalation.

Firefighters responded to the call shortly after 5 p.m. The fire began in one home and spread to an adjacent residence.

Crews battled the blaze for nearly three hours with 40 firefighters and 16 engines and support vehicles, deputy fire Chief Brian Maltby said. The fire burned for so long because of a natural gas leak, but it was not clear if the gas leak was the cause or the result of the fire.

One home was partially collapsed and nearly entirely destroyed, while the other sustained significant damages, Maltby said. An explosion is suspected because the garage of one home was blown out and debris was shewn about the yard, he said.

Multiple neighbours told CBC News that they heard and felt an explosion. One person described the sound as "like a grenade." It is not yet known if the woman and baby were inside the property were the explosion likely occurred.

The woman and the baby were taken to hospital and treated for "minor smoke inhalation," Peel paramedics said.

The Fire Marshal was expected to arrive on scene late Monday to investigate.