The Toronto District School Board is putting 10 more schools under review for possible closure.

48 schools will be reviewed for closure in next 3 years 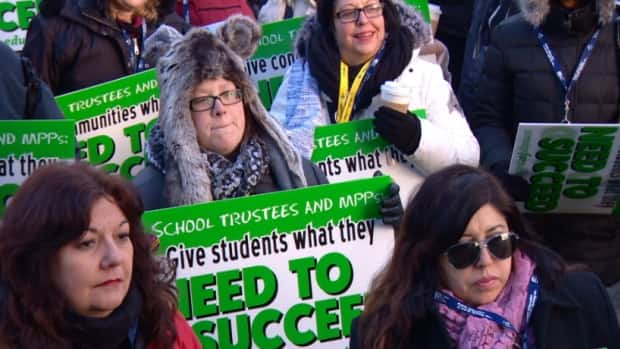 6 years ago
2:42
The Toronto District School Board is putting 10 more schools under review for possible closure - a move revealed after a tense meeting of the board Tuesday night to finalize a plan ordered by the province. 2:42

The Toronto District School Board is putting 10 more schools under review for possible closure.

They join a list of 60 schools that were previously announced as being put under review, as part of a plan to close and sell off under-utilized schools.

‎The first reviews will begin over the coming months and each one is expected to take as long as two years to complete. Most of the schools on the list are expected to stay open but some are certain to close.

News of an expanded list came as the board held a special meeting to discuss possible school closures as part of 13 directives handed down by the province.

Earlier this month, the board released its list of 48 elementary schools and 12 high schools that are being reviewed for closure due to enrolment of less than 65 per cent. The list was assembled after the province demanded the board cut costs and deal with internal turmoil.

Most schools on the list are expected to survive the process, but some are guaranteed to close.

"The baby boom has finished and we are now in a period of decline," said Ward 13 trustee Gerri Gershon.

Many board trustees had spoken out against the tight deadline, saying more time is needed to discuss a long-term plan already in place.

Trustees were greeted by an angry crowd of dozens of protesters before their meeting at the TDSB offices on Yonge Street near Sheppard Avenue. Those who rallied included both parents and teachers.

"I'm here to save our schools," said parent and teacher Yolanda B'Dacy. "Schools are community hubs. They're places where the fabric of our community is built. They are the centre of our neighbourhoods and to close schools with this formula being used is wrong."

On Monday, the Elementary Teachers of Toronto, a local of the Ontario elementary teachers’ union, released an analysis that found the majority of the schools on the list serve some of the city’s most vulnerable students in terms of socio-economic challenges.

The analysis also stressed that the schools provide a host of other social services, like daycares and adult education programs.

Mayor John Tory wrote a letter to Sandals and the chair of the TDSB in January asking that the city be “meaningfully consulted” during the process because schools are community hubs and are essential to healthy neighbourhoods.

On Tuesday, Coun. Mike Layton tabled a motion at a city council meeting asking the province to suspend the plan to close or sell schools until it amends the criteria for what are considered underutilized schools — though city council has no official say in the matter.

The motion was passed unanimously, and a directive was sent to the city manager to provide a list of alternative uses for the schools.

The Toronto District School Board on Wednesday released a list of 60 schools which will be part of a review of its under-used spaces. As many as nine schools could eventually close. The schools are: