Tanmay Bakshi, 12, spent his summer learning from IBM developers, and teaching them, too

Tanmay Bakshi is not your average pre-teen. The 12-year-old is fluent in several programming languages and built his first app by the age of nine.

One might consider that impressive and increasingly important in today's evolving work landscape. But even more so because the profile belongs to a 12-year-old.

Tanmay Bakshi is not your average pre-teen. He built an app aimed at helping children learn multiplication, at an age he too would be familiarizing himself with arithmetic. After three rejections, Apple's App Store accepted "tTables" in February 2013. He was nine at the time.

"I just love coding. I have fun while doing this. It's just like a sport for me." And he is largely self-taught.

But Bakshi's interest in coding dates further back to — senior kindergarten.

"I would always watch my dad programming. How a computer could do something like add numbers or display something on the screen; that would always fascinate me," he said.

His father, Puneet Bakshi, recognized that curiosity and began to nurture it. It started with showing the kindergartner how a computer could display his name.

"I could see the light in his eyes," he said. "By [age] nine, he knew more of programming than I did."

"It is amazing. I have seen him progress. He's unstoppable."

The father and son grew closer over learning to code.

"The bond between him and me is, in fact, the programming," said the elder Bakshi, a self-described "old-time programmer." He is now learning Swift, Apple's programming language, from Tanmay.

At IBM's tech hub Bluemix Garage at Yonge and Dundas streets, Tanmay Bakshi is poring over code. Developer Ankita Kulkarni is trying to steer the 12-year-old through a glitch with the application he is building in a training program with IBM.

"These sorts of things come pretty often in programming," Bakshi said. "You just have to keep trying until it works."

He is more than pleased to explain what he's been doing every Friday for the last six weeks.

"Essentially, I'm developing an IoT (Internet of Things) device that can help you get into a secure area in a much simpler way," he said. He gestures enthusiastically with every word.

"Instead of you having to badge in or put in your password or fingerprint on a mobile device, all you need to do is scan your face."

The guts of the device include a raspberry pi — a credit card-sized computer — a motion sensor and an eight-megapixel camera, Bakshi said.

The sensor detects a person's arrival, the camera captures an image, which is then sent to IBM Watson's visual recognition service, he said. After it analyzes the photograph and determines a match, a phone number for the individual is retrieved from an online database.

The individual will then receive an eight-digit code in a text message, which they need to text back in order to confirm their identity and enter the building. 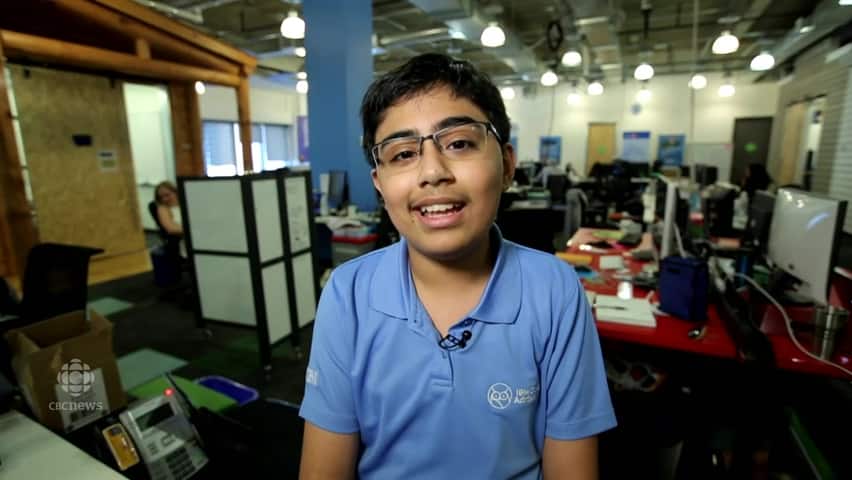 "It's a much more convenient method and it's not compromising on any security," Bakshi said.

John Marini, who oversaw the boy's training at IBM, said staff were floored by his knowledge.

"When he sets his mind to something, there isn't much that keeps him from getting to his goal."

"I think he's provided us with a glimpse into what the future holds with the generation that has grown up with technology."

'Coding is my passion'

Tanmay's father tries to pry the boy away from the computer, reminding him to take a break.

"He tries to go to programming like a magnet," said the elder Bakshi.

"Coding is my passion. That's why I never, sort of, get off the computer," the 12-year-old said.