Three girls whose families fled the bloodshed in Syria and settled in Toronto are finding their way in Canada with the help of high school basketball.

Speaking to each other in Armenian, they are three fresh-faced, smiling teens who use their native language as a secret code courtside.

That comes in handy for Lora Donoian, 18, and twins Houshig and Anna Arakelian, 17, as the three refugees from the bloody conflict in Syria plan their plays for the girls' basketball team at Georges Vanier Secondary School.

In a weird twist of fate, Donoian said when she came to the school near Don Mills and Sheppard Ave. E. in February she recognized the twins from her childhood in Aleppo.

"At first when I came to school I felt alone, like I don't know anybody in the school. I was sitting alone at lunch. So when I saw them I felt really happy," Donoian said. 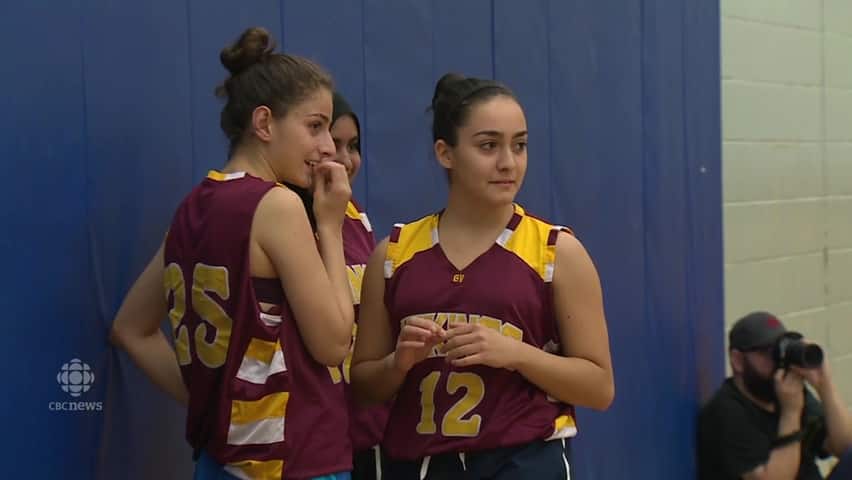 Three Syrian refugee teens on feeling at home in Canada

4 years agoVideo
1:22
Three Syrian refugee teen girls discuss how they have begun to feel more at home in Canada through playing basketball. 1:22

She hadn't seen them since 2012. That's when the conflict in Syria prevented the Donoians from returning home from a family vacation in Armenia. They applied for refugee status from there and never returned to Syria.

"We left our friends, our home. We're missing our country. But we're also happy because [Canada] is a safe place and we have an opportunity to continue our life and create our future and achieve our dreams and hopes," she said.

The three girls found some solace on the court after a conversation with a guidance counsellor at the school.

The girls told the counsellor they used to shoot hoops back home and they liked the game. As a result, the three were enrolled in physical education teacher Mike Milligan's basketball development course.

"They were determined to just play basketball," he said.

Unbeknownst to them, in a class of 25, they were to be the only girls.

Milligan described them as shy at first and "some of the boys wouldn't pass to them." He modified the curriculum slightly to make up for the big height difference. For example, the boys weren't allowed to jump to block the girls' shots.

"One of the neatest things to see was when we create little rules to make it comfortable for them to be integrated and then we wouldn't need those rules anymore because they were able to pump fake the guys and make passes and contribute just like any other player," Milligan said.

'The international language of basketball shone through'

In stilted but confident English, Anna Arakelian said their teacher connected with them right away.

"Mr. Milligan. Oh my god. I love him so much. On the first day he knows we don't speak. He understand us. He's so kind."

The school is extremely multi-cultural so it wasn't difficult for Milligan to instruct the students, Milligan said,

"We like to favour activity courses and that's why it makes it easy to follow along without them having a lot of curricular material that's really language-based," he said.

"The international language of basketball shone through."

As their skills and confidence grew Milligan encouraged the girls to try out for the basketball team that he coached in the fall.

"With the addition of these three girls I think we are even stronger than we were last year," he said, anticipating the current team will go to the finals.

Training in a class full of boys gave them an advantage but there's more to it, including social integration, Milligan said.

"Perhaps they'll have lunch with one of their teammates instead of other people from Syria. And absolutely it's a self esteem boost. To be able to come into the gym and play a basketball game in front of hundreds of fans and have those fans cheering for their successes."

Donoian agreed the team helped them meet new friends, beyond three other Armenian-speaking students who also had come from Syria.

"Now I have Canadian friends too. They are very nice people and I love all of them," she said.