The Syrian civil war separated the Elendaris until an exceptional alliance — between a Thornhill, Ont., mosque and a synagogue — brought them together in Toronto.

'It means everything to be together,' says Rasha Elendari, separated from family for 2 years 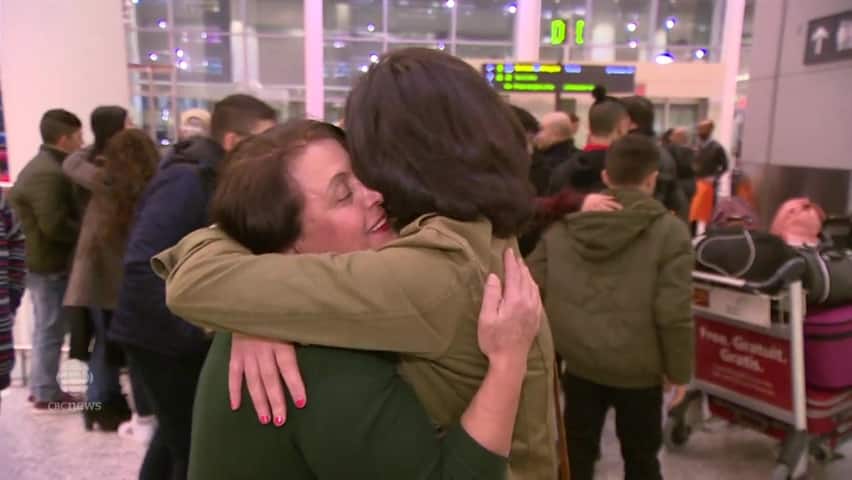 Syrian refugees reunited by a mosque and a synagogue

4 years agoVideo
1:03
The Syrian civil war separated the Elendaris until an exceptional alliance — between a Thornill, Ont., mosque and a synagogue — brought them together in Toronto. 1:03

Wrapping her arms around her sister for the first time in more than two years, Rasha Elandari keeps repeating the same word.

"My beloved," she cries out in Arabic, running for her nephew, Aram at Pearson airport in the wee hours of Wednesday morning.

The toddler sits atop suitcases containing all the belongings he and his family could take from Syria to Turkey and, almost a year later, to Toronto.

More crushing hugs and murmured words of love — of relief — follow as Elendari greets her mother, father, her other sister, and her two brothers-in-law before reaching again for Dali, her 1½-year-old nephew.

​This reunion happened thanks to an exceptional partnership.

In December 2015, a Thornhill, Ont., mosque and a synagogue decided to jointly sponsor a Syrian refugee family. Before the project, all they had shared was a parking lot.

We have to build our community, our relationships, our country based on the common aspects that we share.—Alireza Torabian , co-chair of sponsorship team

The chairs of the project acknowledge that their alliance is unique — and would be unlikely to happen elsewhere in the world.

But that was part of its appeal.

"A group of Muslims and a group of Jewish people showed the community, showed the country and, hopefully, we can show to the world that people may be different [but] there are lots common things," said Alireza Torabian, the mosque's chair for sponsorship.

"We have to build our community, our relationships, our country based on the common aspects that we share."

Torabian and his partner at the synagogue, Andrew Hazen, said their congregations supported both sponsoring a family and the idea of working together. It was the rabbi at Temple Har Zion who approached his counterpart at the Imam Mahdi Islamic Centre last winter.

"We were trying to rescue a family from a war zone, but also do it in a way that showed that Canada was that kind of place that we were proud of," Hazen said.

The two faith communities raised more than $45,000 to pay the family's rent and expenses, spent two weeks in December touring houses that could hold the family of nine, and collected furniture to fill the home.

Together, they have arranged for English lessons and are trying to help Elendari's brother-in-law,  Mohanad Al Kattan, complete any retraining he'll need to practise as a pharmacist in Canada.

And now that the family has arrived, they say the real work begins.

'I was so worried'

She had always expected, however, to return to her homeland.

But then the Arab Spring arrived and Syria descended into a conflict that has since forced more than four million people to flee the country, according to figures from the UN.

"I was so worried about my family," she said in an interview before their arrival. "I wanted to stand by them, by my family at that time."

Her sisters, Manya Elendari and Saba Elendari, had been living in Damascus during the beginning of the unrest. The increased bombing prompted them to flee about 100 kilometres south where their parents lived in Sweida.

"The situation there wasn't as bad, but my parents were active in civil society and the humanitarian organizations, which caused many problems for them by the [government's] security forces," Rasha Elendari said.

The regime of Syrian President Bashar al-Assad arrested her father, she alleges, because he hosted a displaced family with six children.

Neither her father's arrest nor his termination from a teaching position could push the family to leave their homeland. But when a bomb struck a nearby house in the neighbourhood, Rasha Elendari said her sisters worried about their young sons and decided it was time to go.

Rasha Elendari was last able to see them in Lebanon in 2014, but not in Turkey after they fled there last winter.

Instead, she began trying to find a way to bring her loved ones to Canada. On Wednesday they joined the more than 35,000 Syrian refugees who have settled here as privately sponsored or government-assisted refugees.

Today, the Elendari family has begun the task of navigating life in Canada.

​They walked through Toronto's Beaches neighbourhood and Rasha Elendari began teaching her loved ones how to ride a streetcar and decipher the map of TTC routes. They will look at some of the housing options their sponsors found them in the coming days, she said.

She served them a taste of their homeland early Wednesday after they arrived: hummus and kofta. Soon she plans to introduce them to a "more Canadian" dinner — meat and scalloped potatoes.

But for now it's about reconnecting, Rasha Elendari said.

"It means everything to be together," she said in an interview Thursday. "They are following me everywhere I go."

With files from Havard Gould and CBC's As It Happens