This D-Day veteran thought he'd been forgotten, so his community held a surprise parade

D-Day veteran Fred Barnard had been worrying that everyone had forgotten about his service. As communities across Canada marked the 75th anniversary of the D-Day landings, the 98-year-old got his answer.

For quite some time, D-Day veteran Fred Barnard, 98, had worried that everyone had forgotten about his service. He'd become so concerned that he would raise the question from time to time.

"He's said to me a number of times over the last few weeks, very humbly, 'I wonder if people know what I did?'" said Tish MacDonald, his longtime friend.

"'I wonder if people will remember?'"

On Thursday, as communities across Canada marked the 75th anniversary of the D-Day landings, Barnard got his answer — as hundreds of people in his community held a surprise ceremony and parade in his honour, right in front of his house in Uxbridge, Ont., about 74 kilometres northeast of Toronto. 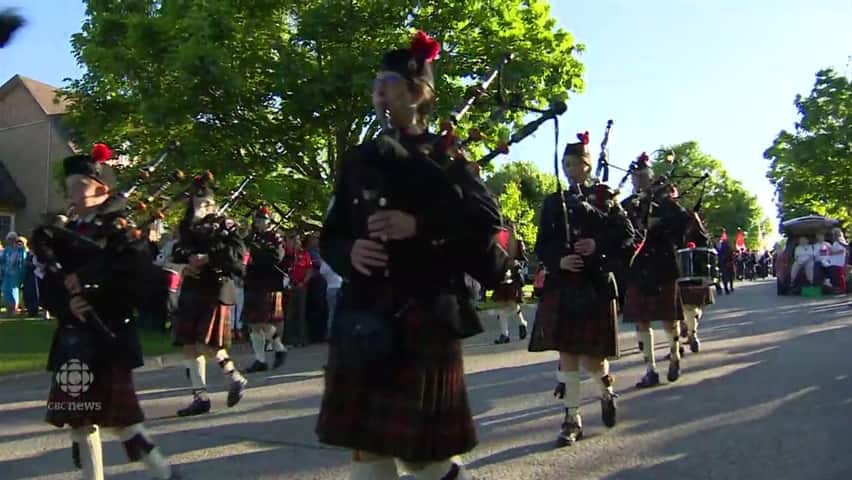 A surprise parade in Uxbridge, Ont. for a D-Day veteran

1 year ago
0:27
D-Day veteran Fred Barnard had been worrying that everyone had forgotten about his service. As communities across Canada marked the 75th anniversary of the D-Day landings, the 98-year-old got his answer. 0:27

"I thought it was an excellent opportunity to show … that we appreciate his service and that we value what he did," MacDonald said. "Hopefully he feels loved and valued."

On June 6, 1944, Cpl. Barnard and his brother Don, both soldiers in the Queen's Own Rifles of Canada, were among the soldiers who landed on Juno Beach, part of the Allied invasion of Nazi-occupied Europe.

What an incredible sacrifice that family has made.- Tish MacDonald, Uxbridge resident and teacher

But their unit came ashore about 180 metres east of their intended landing spot, placing them directly in front of the enemy.

Barnard soon came upon his brother's body, lying dead on the beach.

"What an incredible sacrifice that family has made," said MacDonald, who is a teacher at Uxbridge Secondary School.

MacDonald said she met Barnard 10 years ago and they have remained "wonderful friends" since.

'All here to see me'

Asked if he knew why all those people were at his home, Barnard, quipped, "Oh yeah. They are all here to see me. What else?

"Great. Great having all these people here," he told CBC News. As It Happens6:45Uxbridge, Ont., throws parade for the town's last surviving D-Day vet
Tish MacDonald, who organized the parade for Fred Bernard, speaks to As It Happens host Carol Off. 6:45

Barnard remembers the events of June 6, "just like it was yesterday," he said.

"I lost my kid brother."

Barnard lives with his daughter Donna who says she's now his caretaker.

She knew about the parade beforehand, but was overwhelmed at the large number of people who turned out.

"When I looked out the door it brought tears to my eyes, it really did. And it will mean a lot to dad when he has a few minutes to sit and think about it," she said.

"It's just amazing. The people do remember and we don't want them to forget because we don't want any young people going through what my dad and uncle did."

With files from CBC's Nazima Walji and As It Happens