This bread brings a 'taste of Bosnia to Toronto'

There's a large number of Bosnians, Serbs and Croats in the GTA but traditional Bosnian somun - a delicious pita-style bread baked in a wood-fired oven - is hard to come by. That's why Somun Superstar is so special.

Somun Superstar is located at 998 Kingston Rd. in Toronto

"When it comes to food, nothing is more iconic and personal to Bosnians, especially to the people of Sarajevo, than somun," Alen Zukanović explained to me.

He's the​​​ owner of Somun Superstar, a bakery and sandwich shop that specializes in the traditional somun, a leavened pita-style bread baked in a wood-fired oven.

Using a large wooden paddle, Zukanović ​​​​​​slides the ballooning dough closer to the wood fire, tattooing it with heat to form leopard spots on the dough.

A few seconds later, the paddle goes back in, Zukanović ​​​​pulls out the loaves quickly and places them on a counter. The somun has an ethereal pillowyness to it when it's fresh out of the oven, tearing easily with a slight yeasty and smoky perfume. 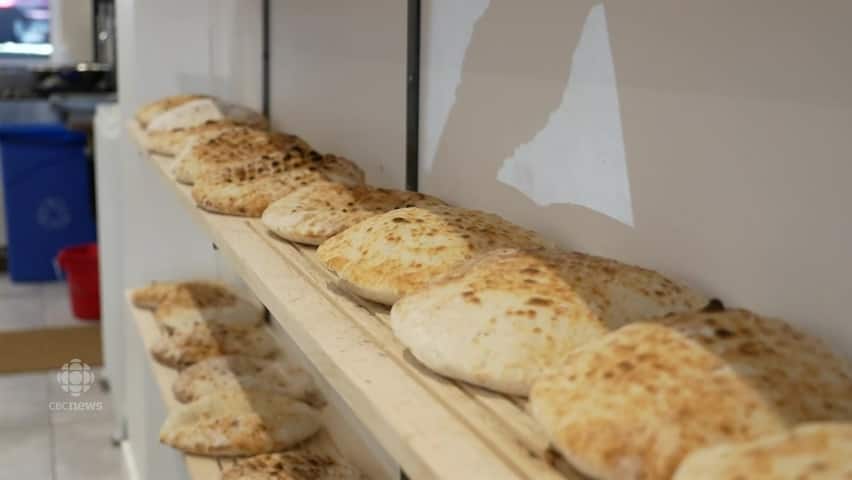 1 year agoVideo
1:01
Somun Superstar is a bakery and sandwich shop that specializes in traditional Bosnian somun, a leavened pita-style bread, cooked in a wood-fired oven.  1:01

"The spots are crucial. They give the somun the signature look."

"Back in Bosnia, years before the war, you would have bakers in communities that would bake and sell somun on the streets." said Sanja Zukanović, co-owner of Somun Superstar.

There is a sizeable group of Serbians, Bosnians and Croatians in the GTA. But that being said, somun is hard to come by. The type of bread you normally encounter is lepinje, similar but not quite the same.

"The difference is that somun is always baked in a wood-fired oven. It has more bounce to it, its softer and it has that smoky feel to it."

The "bounce" in the somun is achieved by not overworking the dough.

"We just massage the dough gently, leaving the air inside. We don't roll it," Sanja said.

This creates air pockets in the bread. Before firing it off in the oven, a metal strip is used to create a lattice, which helps give the bread some added texture.

For the last six months, the couple has slowly introduced East York and the rest of the GTA to somun through Courage Foods, a specialty food shop on Kingston Road.

"The folks at Courage have been incredibly kind to us. They are somun superstars. We were able to sell bread through their store every weekend," Zukanović said.

This is how I came across the impressively soft Balkan breads that Zukanović produces alongside his wife Sonja.

Courage has been regularly stocking their weekend bread shelves with somun from the couple since March.

"We can't seem to stock enough. This type of bread is very hard to come by in Toronto. It sells very quickly," said Karen O'Brien, owner of Courage.

The added beauty of this pita is in its versatility. You can walk into the bakery and pick up a loaf or two somun and use it when you make breakfast, with eggs and a generous dollop of ajvar, or for lunch with thinly sliced flank steak with chimichurri sauce. It's even good with curry, Zukanović said.

By the way, you can find Ajvar at Mak European Delicatessen.

"When you treat it like a pita, it can hold a lot of sauce."

The good news is, the couple's bakery is now open to the public. It is a few doors east on Kingston Road in a bright, minimal space where the somun production is front and centre.

"We have tried to keep things as traditional as possible, bringing a taste of Bosnia to Toronto," Zukanović said.

At the bakery, Alen and Sanja have also created a menu inspired by their upbringing and travels through Bosnia.

The freshly baked somun is sliced and stuffed with cevapcic and the accoutrements (ask for extra ajvar) or without meat where you get the full pronounced pepper notes.