I've covered a number of restaurants located in Ontario's Golden Horseshoe in this column, especially ones close to the QEW artery to Niagara. It includes Thai food in Burlington, Syrian shawarma in Hamilton and Chengdu-style food in St. Catharines.

It's not just because these cities have great food establishments, but it's also because I tend to spend a lot of time in wine country, particularly Niagara. I get a lot of suggestions from wine makers, cellar hands, restaurateurs and foodies. Maria's Tortas Jalisco in Stoney Creek is among them.

Over a year ago, I worked on a story about migrant workers in wine country. Once the interviews were done I always ask, "So, where do you like to eat?" A local is a far more reliable and invaluable resource than anything you'd find online. 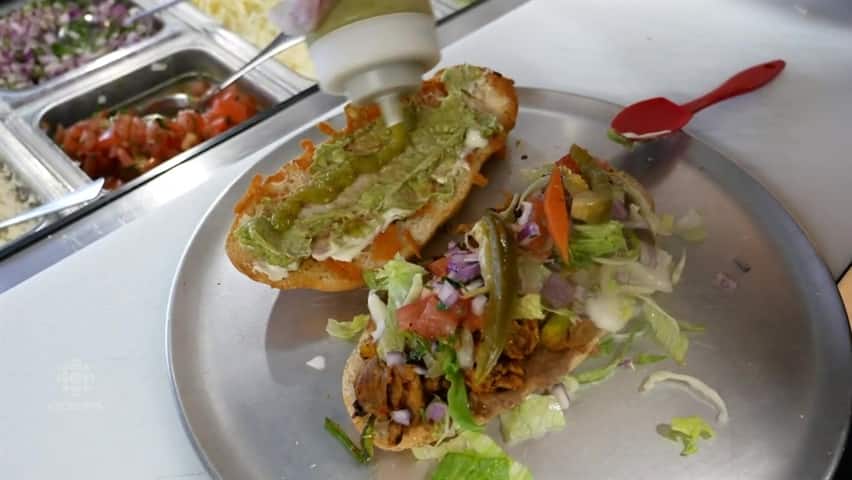 A group of migrant workers from Mexico all gave me the same answer: "The next time you're stuck in traffic heading back to Toronto, jump off at Stoney Creek for Maria's Tortas Jalisco. They have great tacos, but the tortas are amazing."

Months passed. One day I found myself in bumper-to-bumper traffic as I inched toward the Burlington Skyway hungry and annoyed.

That's when I hopped off at Fruitland Road and it only took me a few minutes to find Maria's Tortas Jalisco.

While it's on a major artery that connects Niagara to Hamilton, it can be easily missed. But also, maybe your sights are set on Hamilton or Niagara and not the lone, one-storey building that sits next to a small plaza where you will find some of the best traditional Mexican cooking around.

Maria's Tortas Jalisco is not a restaurant.  With six stools and a menu designed for fast casual consumption, it's more of a takeout spot. It's run by a mother and daughter team, Maria Ojeda and Helen Tafolla.

I was encouraged to try the Sopa Azteca, a daily special that is now a staple on an extensive menu of tacos, tortas and full plates.

"It is my mom's specialty," Helen Tafolla said as she presented a hot bowl of red liquid, topped with bits of tortilla.

The soup's deep smoky and tomato flavours are accented by strings of cooked chicken and two types of cheese: cotija and oaxacan. While the feta-like cotija cheese dissolves into the soup, it adds a creaminess to each spoonful. The oaxacan cheese on the other hand is warm and pulls like mozzarella, very gooey.

Ojeda is as OG as they come in the hospitality industry. I quickly learned that she used to be a respected musician.

"In a previous life before giving that up when I came to Canada, I used to tour with famous bands," she said modestly. Ojeda toured under the stage name "Maria La Tapatia," paying homage to her Guadalajara roots.

When she moved to Canada in the early 1990s, she took a break from the music industry and found herself gravitating toward food.

"I missed the cooking of my homeland, of my mom and grandmother, so I opened a taco stand," Ojeda said.

In Kensington Mall, Ojeda opened the stand in the 1990s, where she slung street food reminiscent of what you would find in the various side streets of Guadalajara.

Eventually Ojeda upgraded her operation to a bricks-and-mortar establishment on St Clair West.

"My mom ran El Palenque restaurant for almost 10 years. I remember being in the shadows, growing up in that restaurant," Tafolla explained.

Due to personal reasons, Ojeda retired from the restaurant in the mid-2000s, and Tafolla moved to California where the family has some roots.

"We were reunited a few years ago when I moved back to Canada. We moved in together into the Hamilton region," Tafolla said.

In the last decade, we have witnessed a boom in Mexican restaurants, particularly the taco renaissance.

Tafolla and Ojeda told me that seeing taco joints open up all across the province sparked an interest in going back into the business.

"We saw a lot of new places but there was a lack of traditional food. It really made me want to get my mom back in the kitchen to show traditional tacos, but also other aspects of Mexican food."

During my second visit, I learned that at Maria's Tortas Jalisco, the motto is scratch cooking. Ojeda makes all the salsas herself.

There are over a half a dozen ranging from brightly acidic to throat-scorching — try them all, the meats are prepared daily and Ojeda even makes fresh masa tortillas for her tacos.

One of the signature items that both the mom and daughter wanted to focus on was Tortas, classic Mexican sandwiches made with crusty white bread with a variety of fillings. Think of your favourite taco combination and it's available in torta form at Maria's Tortas Jalisco.

I'll go a step further and say that the torta version of the al pastor or chorizo taco tastes better and provides for a more pleasing eating experience. The crusty exterior gives way to bread that is slightly soggy from the filling of meat, guacamole, mayo, tomatoes and jalapeno.

Ojeda makes many great tortas but I find that her al pastor and chorizo are my favourite; those two versions illustrate her spicing when it comes to marinated slow cooked meats.

When I asked Tafolla why Stoney Creek and why not open a restaurant back in the GTA where Ojeda's cooking will surely take off, she said: "We wanted to stay close to home and we found this place totally by chance. It used to be a Croatian bakery, and the kitchen was intact. It was affordable to us."

Recently, I learned that Ojeda is also known for her sweets, so I tried her tres leches cake.

The simple dessert of sponge cake soaked in a milk mixture of evaporated, whole and condensed milk sounds simple, but it is entirely capable of being destroyed by a haphazard cook. There are many Mexican places that have this cake on the menu, but few do it right.

Ojeda's version is light, milky and creamy with hints of vanilla. It is sweet but not saccharine. After a round of fiery salsas and smoky flavoured meats, I think it's the perfect ending to a meal at this tiny gem.