Toronto Community Housing: Thousands of units could close due to lack of cash for repairs

Toronto Community Housing has closed 400 subsidized homes and says it will have to close thousands more if there’s no funding provided in the upcoming federal budget. 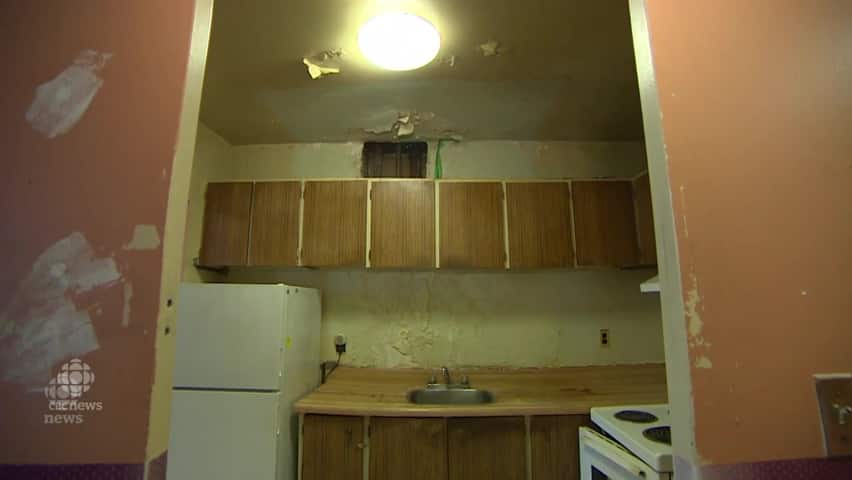 5 years ago
0:46
A look inside a Toronto Community Housing unit beyond repair. 0:46

Behind a stand of trees on Islington Avenue., north of Highway 401, 18 town homes stand empty, boarded up since 2008.

In a city where housing is at a premium, it's rare that someone can afford to leave multiple properties vacant.

The landlord, Toronto Community Housing, says the 1962-era, three-bedroom town homes are beyond repair; they're ridden with mould, and water has penetrated the foundation.

"Over the years, there was no money for repairs and maintenance," says TCH spokeswoman Lisa Murray. "Water got in through the roof. The roof was patched many times, but there's only so many times you can patch a roof."

The homes are just some of the 400 units TCH says it has closed because it doesn't have the money to do the structural repairs, and there's no money to tear them down.

It says another 7,500 of its subsidized units are not going to be fit for people to live in if TCH doesn't get new funding to fix them.

"My worst nightmare is to have to tell those families that they have to leave the unit because it's not habitable and I have no place for them to go," says Greg Spearn, president and interim CEO of TCH.

He took CBC News on a tour of one of the high-rises TCH owns in downtown Toronto.

In need of more than a patch

Many of the corporation's 2,100 buildings are 50 years old. They've been patched but now need structural repairs for roofs, leaky water pipes, single-pane windows, and exterior cladding on buildings that don't keep water out, says Spearn.

Patches of concrete in the lower-level garage had fallen from the roof, rebar holding the concrete had rusted, and water was leaking from pipes and behind walls.

My worst nightmare is to have to tell those families that they have to leave the unit because it's not habitable and I have no place for them to go.- Greg Spearn , president, Toronto Community Housing

It's no longer safe for drivers to park their cars in this garage — a big concern because the garage is part of the foundation for the building, says Spearn.

"The major structural items have to be taken care of because without that, there's no point fixing a unit if you're going to have a building failure," he says.

After years of neglect, TCH says it is making a dent in upgrading its buildings. The city has put up the money for structural repairs, but that well runs dry early next year.

Show me the federal money

The city's housing advocate, Counc. Ana Bailão, says she's going to pay close attention to what the federal government has to offer in its budget, which will be announced on March 22.

She and Mayor John Tory took the federal Minister of Infrastructure Amarjeet Sohi on a tour of the revitalized Regent Park in January. The minister and Prime Minister Justin Trudeau have said they are committed to spending $20 billion on infrastructure, including social housing, over the next 10 years.

"One of the things we didn't have in the past is the availability to use federal funds for the repairs," says Bailão. "We are hoping this federal budget is going to give us the flexibility to use that cash to do those repairs that we need."

TCH is the city's biggest subsidized housing provider with about 60,000 units. But there are other providers, including non-profit groups, and they're in trouble, too.

"We have about this decade to work with them [the other groups] so it never gets to the point of TCH," says Bailão. "But some of these non-profit housing providers are starting to come to the city because they are also in dire condition."

There's no reason for the federal government to back away from its commitment to social housing, says Toronto MP Adam Vaughan.

"There are dollars on the table for green infrastructure and retrofitting and repairing social housing, affordable housing and co-ops," says the former city councillor.

But Toronto will have to wait for the budget to find out the exact dollar amounts, he says.

There may be some good news for the social housing sector on Monday, when Ontario's housing minister is expected to release a long-term affordable housing strategy.

The number of people who are on the waiting list for low-income housing in the city continues to grow. At the end of last year, there were more than 95,000 families or individuals on the list, while the number of people who are housed year-to-year has dropped according to Housing Connections, the city-run service that manages the waiting list for Toronto.

The corporation's CEO says the situation is demoralizing for the community — there is a longer-than-ever waiting list, and existing tenants are uncertain whether their unit might be next to be close.

"Some of our residents will not tell us when they have leakage problems because they don't want to be moved out of the unit. They'd rather stay in the community or stay with the assurance that at least they have a roof over their head."