A Grade 12 student whose arm was badly sliced in a glass door panel filed a $5-million lawsuit Tuesday against the Halton Catholic District School Board.

Arm went through glass panel in door at high school 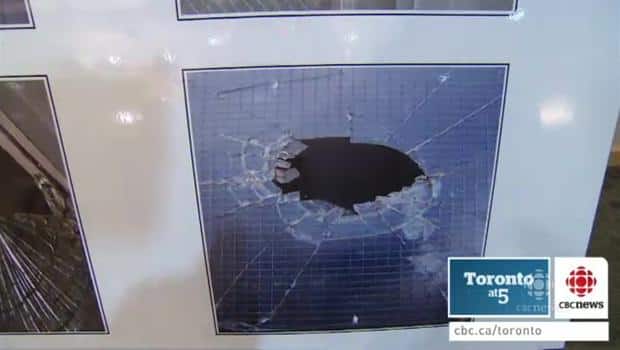 7 years agoVideo
2:13
A school board is being sued after a student was injured when his arm went through a glass panel. 2:13

A Grade 12 student whose arm was badly sliced in a glass door panel filed a $5-million lawsuit Tuesday against the Halton Catholic District School Board.

The student's lawyer says the lawsuit highlights a safety concern with a widely used form of glass — often called safety glass — that is built with wire mesh.

Last year high-school student Sean Lloyd, who is now 19 years old, was running late for class at Assumption Catholic Secondary School in Burlington, Ont. When he accidentally pushed the glass instead of the door's metal bar, his hand went through the door's glass panel.

He needed two pints of blood and 48 stitches because of the injury.

"My surgeon, she said that the nerve damage is most likely going to be permanent," he told CBC News, adding that he still can't feel anything on much of his forearm.

His lawyer Michael Smitiuch said Lloyd isn't the first student to be injured by safety glass, and he likely won't be the last.

"Unless changes are made, the continued use of wire glass in schools is a frightening situation and an accident waiting to happen," he said.

Smitiuch said the $5-million claim is meant to send a message.

"Three million dollars of it is for punitive damages, because it's our position the school board knew that wired glass was very dangerous and didn't take appropriate action," he said.

Doug Perovic, a U of T engineering professor who will give evidence in the case, said glass with wire mesh can break more easily.

"The fracture toughness of that glass is significantly reduced," he told CBC News. "And in fact, it's reduced even more than regular cheap window glass."

The type of safety glass that caused Lloyd's injury has been banned in the U.S., and his lawyer wants Canada to follow suit.

For example, a laminated glass can survive high temperatures during a fire and also handle impact when it gets hit by something, but that type of glass is double the cost of wire glass that’s currently in use across many schools in Canada.

The school board did not comment on the case, citing that it is currently before the court.

None of the allegations made in the lawsuit have been proven in court.

With files from CBC's Lorenda Reddekopp