Hundreds of people turned up to a protest march in downtown Toronto that was organized in response to the death of Sammy Yatim, the 18-year-old teen who was shot by police on a TTC streetcar. 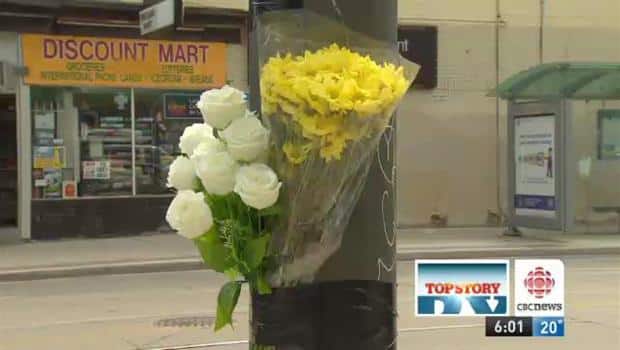 Hundreds of people turned up to a protest march in downtown Toronto that was organized in response to the death of Sammy Yatim, the 18-year-old teen who was shot by police on a TTC streetcar.

CBC News has learned that the Toronto police officer who shot Yatim has been suspended with pay. The shooting remains under investigation by the province’s police watchdog.

The shooting on July 27 shortly after midnight, which was captured in amateur video posted online, has Yatim's family demanding answers.

They've seen the video, which includes the sound of nine gunshots. When the audio is enhanced, a stun gun can also be heard after the shots are fired.

The people taking part in the protest march gathered at Toronto’s Yonge-Dundas Square at 5 p.m.

The CBC's Steven D’Souza said the crowd included members of Yatim's family, some of his friends, as well as ordinary people who were outraged by the shooting.

The marchers headed west, with some stopping at Toronto police 52 Division to voice their anger, D'Souza reported.

Chants of "Shame!" and "We want justice!" could be heard as the protesters made their way toward the intersection of Dundas Street West and Bellwoods Avenue, near the spot where Yatim was shot on the streetcar.

The full line of protesters stretched for more than a city block. Some wore T-shirts or carried placards decrying police violence and expressing calls for justice in Yatim's death.

The shooting has left many Torontonians wondering why police fired at Yatim, given that witnesses have said the teenager was armed only with a knife.

"I think something went wrong here, but I guess we're just going to have to wait and see," said Marco Chevalier, who told CBC News earlier in the day that he intended to attend the protest march on Monday evening.

"But in the meantime, this family has lost a son [and] a brother."

Henrik Bechmann, a software developer who lives in Toronto, said the streetcar shooting concerned him, especially in light of prior police-involved shootings in the city.

"The police have a bad attitude, it needs to be fixed," Bechmann told CBC News, as he attended the protest march on Monday night.

Another protester in the crowd, Joseph Nazar, said he has been a close friend of Yatim's family for years.

"An injustice has been committed," he told The Canadian Press, adding that the family is coping the best it can.

She hopes Sammy's Fight Back for Justice will help stop a repeat of what she sees as an injustice at the hands of police.

"Police everywhere don't have a right to mistreat us just because they have a weapon," the Facebook group says.

He declined a full interview but said his family is getting a lawyer.

The family lives in the area of Sheppard and Victoria Park avenues, and moved to Canada from Syria about five years ago. Yatim had recently graduated from high school.

Neighbour Valentine Rociu said Yatim was a good kid who was "extremely calm."

Police Chief Bill Blair, during a news conference where he sought to assure Torontonians that he wanted answers to the shooting as much as they do, said the police force was reaching out to the family.

"As a father, I can only image their terrible grief and their need for answers," Blair said.