From shelter dog to law enforcement: Axel has become a star with Durham Regional Police

He’s gone from stray dog to star police officer in just four years — although it might seem closer to 32 years to Axel himself. In that time, the Belgian Malinois has become a key member of Durham Regional Police’s canine unit.

Belgian Malinois was abandoned as a puppy, but is now an elite member of the canine unit

He's gone from shelter dog to star police officer in just four years — although it might seem closer to 32 years to Axel himself.

In that time, the Belgian Malinois has become a key member of Durham Regional Police's canine unit.

Axel specializes in searching for drugs and firearms; he's been known to leap a 2.5-metre wall to track them down, his handler Det. Const. Bryan Armstrong says.

"They have that drive in them," Armstrong says. "They want to do something and all we do is manipulate them to do a job for us."

The bond between the pair is obvious.

Axel whines and starts wagging his tail as Armstrong approaches the kennel and then rubs up against his handler's legs as soon as he's freed. He gets to go home with Armstrong at the end of the day, although Axel lives outdoors in a heated doghouse.

Extraordinary circumstances brought the pair together three years ago.

Axel had been scheduled to be euthanized after having been given up to an animal shelter on the East Coast, Armstrong says.

Bred for the work

But an animal control officer there recognized the breed and realized that she might be able to find Axel a job instead of a home. She got in touch with an animal rescue group in Ontario, which called one of Armstrong's friends.

The police officer says he knew at once that Axel was, quite literally, bred for the work.

Belgian Malinois are shorter and leaner than other shepherd breeds, which means they're able to squeeze into tight hiding places.

And they have an incredible work ethic, Armstrong says.

"They're very athletic and they're very hard to tire out," he says. "They're the elite athletes of the dog world." 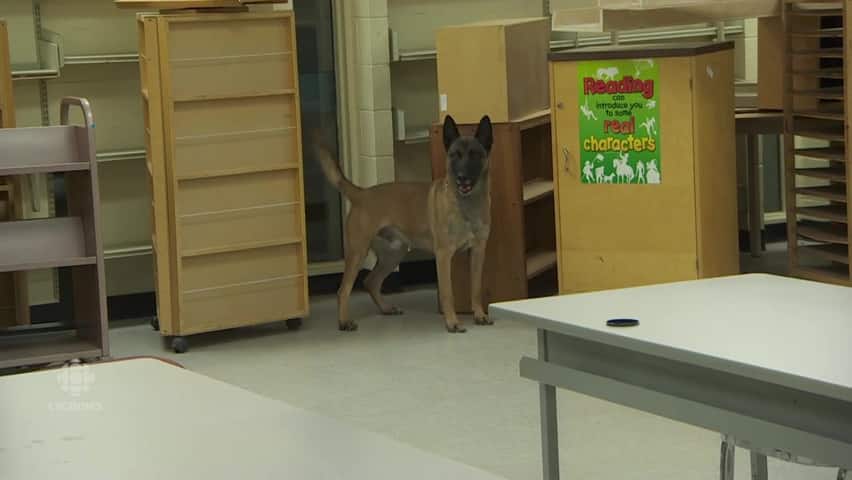 Cop dog Axel can track down drugs in under a minute

4 years agoVideo
0:19
From a shelter dog to a Durham police officer in just four years, Axel has a knack for sniffing out marijuana and other illicit goods. 0:19

Axel proves that when he tracks down a 70-gram bag of marijuana in less than a minute. He lets out three sharp barks, calling his handler over.

It's that drive to work that Armstrong suspects led to Axel being given up as a puppy.

"I like to think that it was a family that couldn't handle him," he said. "Because this is not a dog that you want to have in your home unless you give him something to do."

Finding Axel also saved the police service a lot of time and money.

Officers typically work with a U.S. dog broker who imports animals from Europe, where they're bred to work in law enforcement, Armstrong says. Each dog costs $7,000 to $10,000, and potential handlers will test up to 20 animals before making a choice.

When he's off the clock, Axel loves attention. He's panting and jumping up on a visitor as soon he's finished his search.

"They love getting petted," Armstrong says. "If you pet them once, they're your friend for life."

It's a surprisingly attractive trait in a police dog, because they're also used as ambassadors, Armstrong says.

"So we're looking for the dog that's very sociable when we are, but can also take care of business when we need them to."

Durham police's canine unit celebrates its 25th anniversary in 2017 with its signature calendar — and a certain Belgian Malinois makes a guest appearance as Mr. October.

With files from CBC's Alison Chiasson