Someone shipped this Toronto man's stolen bike to the Philippines, then he got it back

Unlike most cyclists in Toronto, Warren Hull got his stolen bike back — but not before it took a trip around the world.

Unlike most cyclists in Toronto, Warren Hull got his stolen bike back — but not before it took a trip around the world.

Hull's tiffany blue mountain bike travelled nearly 27,000 kilometres to the Philippines and back before it was returned to him in September.

Hull named the bike Tiffany for its colour, and he reached out with the "crazy story" of its stolen adventures as part of the bike theft series CBC Toronto put out last week.

So how did Tiffany end up in the Philippines? Let's start from the beginning.

Hull has been mountain biking for more than 20 years. He bought Tiffany, a plus model Trek Stache, in 2015 to use as his winter ride on the trails of Durham Forest about an hour northeast of Toronto.

After taking the $3,000 bike for a ride there in March, he locked Tiffany up in his condo storage locker in Liberty Village. A week later, he went down to get some pasta sauce and it was gone.

"I was kind of dumbfounded," said Hull. Nothing else but the bike was stolen, he added.

Hull quickly got in touch with the building's concierge, who found security footage of the bike being stolen by two thieves on March 24.

"You think it's gone," Hull told CBC Toronto. "Then seeing someone actually walking out with your bike, it irked me more." 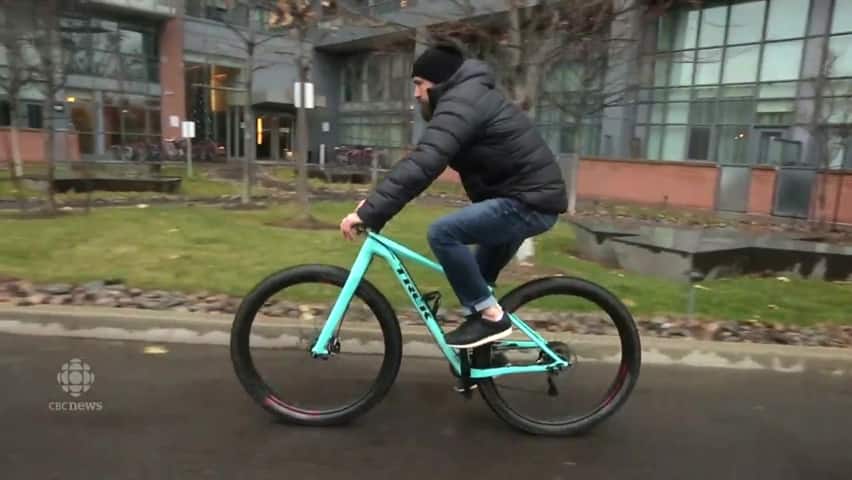 A Toronto man got his stolen bike back from the Philippines

3 years agoVideo
1:48
Warren Hull's mountain bike, named Tiffany, was stolen in Toronto, sent to the Philippines and he got it back. 1:48

After reporting the theft to police, Hull started playing amateur sleuth. When his bike was stolen, it was missing the "quick release," a part that allowed one of the wheels to spin. Hull says without it, the thieves couldn't ride the bike out.

So Hull got in contact with Trek through a downtown bike shop, because the part could only be ordered through the manufacturer. Suddenly, he had a name.

"I found a gentleman matching that name and his profile picture was of him on a mountain bike so I put two and two together and I guess he was my main suspect."

From there, Hull entered his "creeper" phase. He followed the man's social media posts hoping to catch a glimpse of Tiffany, but he saw a couple other clues first.

'Those are my brakes'

The man changed his profile photo at one point and in it, the man's bike had different-coloured brakes on it. After seeing the photo, Hull immediately thought, "Those are my brakes."

After that, Hull saw that the man had put his XTR pedals up for sale on a Facebook group for used bicycle parts.

Up to this point, Hull hadn't reached out to the man. He says it was a waiting game.

Hull said he had pieces of the puzzle, but it didn't come together until early August.

It was 2 a.m. when Hull decided to check in on the man's posts and saw Tiffany for the first time in months.

"I was yelling through the condo, 'Are you f--king kidding me? Tiffany, Tiffany, it's found!' to my girlfriend," said Hull, adding that the bike was discovered in the Philippines.

The man had shipped Tiffany to his sister-in-law, and she had tagged him in a photo, thanking him when the bike, and another had arrived.

After he "calmed down a bit," Hull says, he posted on Facebook about how his "beloved Tiffany" had arrived in the Philippines. He let social media do the rest.

Hull got a lot of feedback online, including from those asking him if he was going to go there to get it back. For the record, he says he "didn't want it that bad."

But then Hull got a message from a friend he had made through the Stolen Bikes Toronto Facebook page. The friend told him to take the post down because the man would be shipping Tiffany back.

"It came back two weeks later and I ended up meeting the guy who had bought it," said Hull. "He was very apologetic, very emotional. He was scared of me, of what I was going to do.

"It was kind of surreal to get it back after an around-the-world trip."

After getting the bike back on Sept. 1, Hull phoned police to let them know.

Now he says Tiffany has become a bit of a celebrity in the mountain biking community. After getting it back, he thought about selling the bike, but his friends quickly dissuaded him.

Seeing it, seeing the colour and and actually riding it again, I'm like, 'Yeah I can't sell it.'- Warren Hull

"They're like, 'You can't sell it, it's got a story!'" Hull told CBC Toronto. "Seeing it, seeing the colour and actually riding it again, I'm like, 'Yeah I can't sell it.'"

Since its return, Tiffany's accommodations have been upgraded.

The storied bike now stays with Hull in his condo and he doesn't trust his storage locker with much more than pasta sauce.

With files from CBC's Lauren Pelley