'To have a platform where people are listening ... it means everything,' Joel Zola says

While bouncing around in Toronto's shelter system, Joel Zola felt like he didn't have a voice — so he created his own platform in order to be heard.

Zola founded quarterly magazine Street Voices in 2014 in an effort to empower marginalized voices. He launched five issues while he was homeless.

"People thought I was crazy. They were like, 'Focus on getting a house. What are you doing trying to build a magazine? Get a real job. Magazines are dead,'" he said.

"It was inspiration because it's like, if you can do it while you're living on the streets, what's the next person's excuse?" 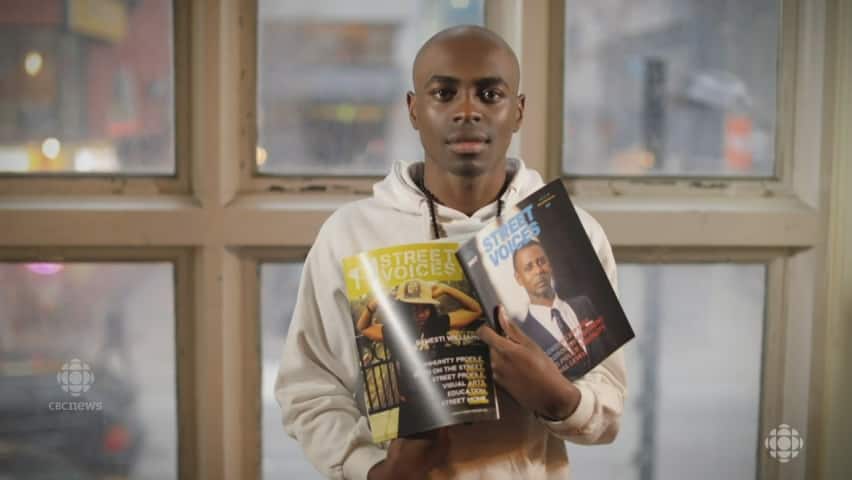 Start-Up City: This man started a magazine while living in a homeless shelter

3 years agoVideo
2:15
While bouncing around in Toronto's shelter system, Joel Zola felt like he didn't have a voice — so he created his own platform in order to be heard. 2:15

Zola was 13 when he first got kicked out of his family's home in Calgary. His family took him back in, but at 15, he dropped out of school and was getting into trouble a lot, which he says was the last straw for his mother.

He was thrown out for good this time.

For the next seven years, he travelled from city to city, shelter to shelter, trying to figure out what he wanted to do with his life.

"I was soul-searching," Zola said.

Along the way, he discovered a passion for poetry and media. He made the move to Toronto and looked for ways to have his poetry published, but the search continued to come up short.

"I realized that if I had this problem, people around me also had the same problem," he said. "The solution was to create Street Voices."

Zola was living at Eva's Phoenix at the time, a transitional home for youth between the ages of 16 and 24 who are experiencing homelessness. The home had a print shop, so he decided to create a collection of poetry in the form of a pamphlet.

It wasn't long until he started to think bigger. He went back to the print shop and said he wanted to expand the idea into a magazine.

He ended up connecting with a local graphic designer, Amisi Designs, at The Remix Project, a Toronto-based non-profit organization that provides access and resources for young people who are often shut out of opportunities to enter creative industries like music and photography.

Zola also got guidance on how to put together a magazine. He took submissions of short stories, visual art and poetry, and included information on where to find programs and services for street youth in Toronto.

To celebrate the magazine's launch, Zola decided to put on an event at the Evergreen Centre for Street Youth.

"Street kids know Evergreen is the spot to go," he said. "If we're Street Voices, we need to go where the street kids go."

The event was a huge success, he said.

"We brought out rappers and singers and poets, and we all just shared one big platform. It was, like, this magical thing that happened," he said.

"When you're living on the streets, there are a lot of barriers. When you see somebody who's going through these same barriers but still being productive, it's motivational."

At the same time he was launching the magazine, Zola worked as a community artist at SKETCH Working Arts, a community centre for marginalized artists in the city. SKETCH gave him the platform to start running weekly poetry workshops as part of Street Voices, to keep the engagement from that first event going.

Zola says being able to give street youth a voice through the magazine and the workshops means the world.

"To have a platform where people are listening and people care, and people respect you, it means everything."

Zola hopes the platform removes the stigma surrounding homelessness and creates opportunities for people living in the shelter system.

"This was an idea people thought I was crazy for. Now, it's an idea that people respect me for."

Start-Up City is CBC Toronto's five-part digital video series that spotlights some of the GTA's most innovative start-ups.

Julia has been working in journalism since 2012 — first as a newspaper reporter in Moncton, before making the move to Toronto to work for CBC. She's particularly interested in social issues, health and the creative community, and is a proud Maritimer and dedicated fundraiser for type 1 diabetes research.