Emma Harris is the founder and CEO of Healthy Pets, a start-up that enables pet owners to connect with veterinarians through video chat.

Emma Harris knows the stress and anxiety that comes with having a sick pet.

Her now-two-year-old yellow Labrador, Bo, fell ill as a puppy, which meant Harris was in and out of veterinary clinics for months. She estimates the vet bills added up to nearly $10,000.

The amount time and money spent on the ordeal led her to create Healthy Pets, a start-up that enables pet owners to connect with veterinarians through video chat.

"Instantaneously to have a solution that enables you to get the advice and the care that you need in a moment when you're freaking out — that's very significant," Harris said. 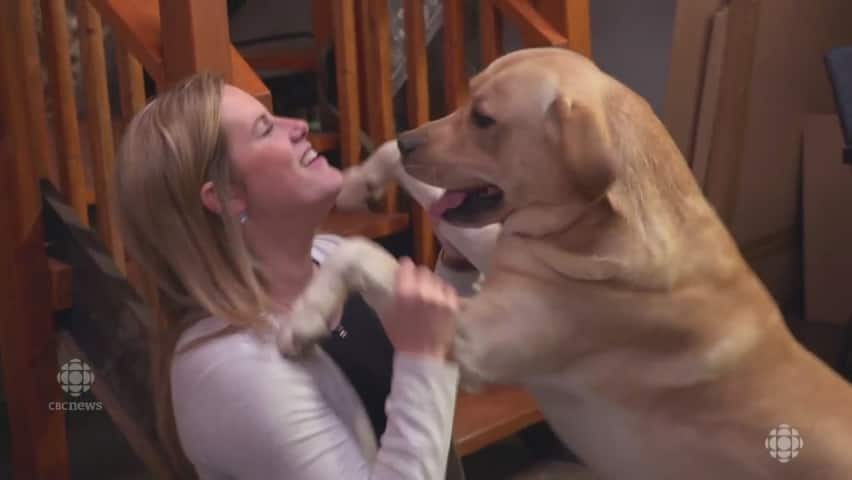 Start-Up City: Connecting with your vet online is now possible

'I still can't talk about it'

Harris holds a Bachelor's degree of business administration from the University of Western Ontario and a Master of Science degree from Glasgow Caledonian University in Scotland. She was working out of the MaRS Discovery District in Toronto two years ago when she and her fiancé decided to adopt a dog.

Early on, however, Harris and her fiancé realized there was something wrong with their puppy. Bo was constantly drinking water and he developed a significant cough.

That's when the vet visits began.

"I just hate talking about it," Harris said with a laugh. "I still can't talk about it a year later."

Every test came up blank, and treatment after treatment failed to give Bo any relief. Meanwhile, the cough was getting worse.

"We would be up at 4 a.m. thinking, 'Oh my gosh, are we going to have him tomorrow?'" Harris recalled.

The scariest moment was when she was on a business trip in Boston. Her fiancé called her at 5:00 a.m. and said, "The dog can't breathe."

"I didn't know what to do," Harris said.

Her fiancé rushed Bo to an emergency vet clinic where they were able to contain his coughing, and eventually — months after this all began — they received a definitive diagnosis. Bo had a very rare respiratory infection called lungworm.

But even though they finally had a name for Bo's illness, Harris and her partner were still making frequent trips to the vet with follow-up questions.

"We were constantly going to the vet just out of worry, and every pet owner knows that as soon as you walk in the door, you're going to be paying at least $100-150 for their time," Harris said. "But as a pet owner, what I needed was a quick conversation a lot of the time."

"I didn't need to leave work early to drive to my vet clinic to pay $150 for a three-minute, 'Is this normal?' kind of conversation."

It was through that frustration she developed Healthy Pets.

Healthy Pets is available online or by iOS or Android app. Right now it's only available in Ontario, but Harris hopes to expand to the rest of Canada soon.

After registering your pet, the app will give you a list of veterinary clinics near you. If you need an appointment right away, you can also search vet clinics by next availability.

The cost for a single 15-minute appointment is $40. Those who have several pets or a pet that needs frequent can buy a yearly subscription to the service for $10 a month, which includes four consultations and a discount on extra appointments.

Vet clinics choose their own availability, which includes regular business hours as well as off-hours. The service isn't quite 24 hours a day yet, but the goal is to get there soon.

Before Harris started working on Healthy Pets, the province's College of Veterinarians did not approve telemedicine in the context of veterinary medicine. A vet couldn't say anything to a pet owner over the phone, even if they had a history treating the pet.

In April 2017, the college's council set a new practice standard which "supports innovation in the delivery of safe, quality veterinary medicine in Ontario," according to a press release issued at the time.

Regulatory barriers still exist because of that commitment to pet safety. You can't receive a firm diagnosis or a prescription for non-over-the-counter medications on Healthy Pets, but you can receive some peace of mind, Harris said.

She worked with 20 vet clinics in a beta test of the service last summer, which connected with more than 100 pet owners. And while reaction from the owners was overwhelmingly positive, some of the veterinarians Harris approached still had reservations about telemedicine.

Vets who have signed up, she says, are excited about the prospect of helping a greater number of patients more efficiently. Rural veterinarians are now able to connect more regularly with pet owners who live farther away.

When Harris started the company, she quit her full-time job and worked evenings and weekends as a waitress and a math tutor to pay her rent. There are challenges for any entrepreneur, she says, but especially so when you're a solo, first-time, female entrepreneur in technology.

"It can be very difficult to be taken seriously," she said. "I've been asked in board meetings how committed I am based on my marital status and timeline to have children."

When asked how she responds to those kinds of questions, Harris laughed.

"I will still be collecting payments from pet owners whether or not I have a child. Pet owners are not going to stop needing my services because, 'Oh wow, the founder and CEO is now having a kid,'" she said.

"But furthermore... it takes away from your legitimacy as an intelligent businessperson. I would never want to work with somebody who is judging me based on that type of a timeline."

It's Harris's belief in her start-up's business model that keeps her going.

"I believe Healthy Pets solves a huge gap for pet parents, and it's that belief that helps me get up at 5 a.m. every day to keep doing what I'm doing."

Start-Up City is CBC Toronto's five-part digital video series that spotlights some of the GTA's most innovative start-ups.

Julia has been working in journalism since 2012 — first as a newspaper reporter in Moncton, before making the move to Toronto to work for CBC. She's particularly interested in social issues, health and the creative community, and is a proud Maritimer and dedicated fundraiser for type 1 diabetes research.