Stampeders' horse allowed in Toronto hotel after all

The Calgary Stampeders were allowed to recreate the magic of the team's first Grey Cup victory when a Toronto hotel allowed a horse to enter the premises, just a few hours after locking the mascot and its entourage out.

Horse now gets to enter stadium for Grey Cup game 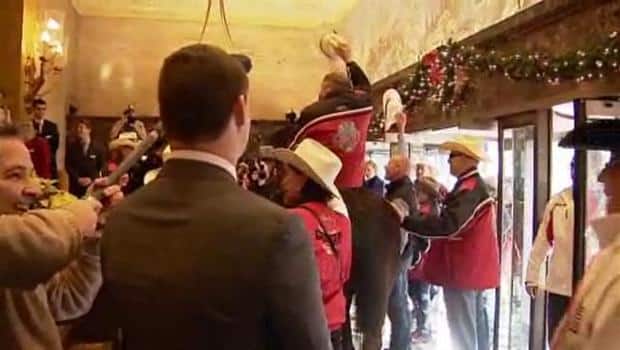 8 years agoVideo
0:40
A Stampeders horse was allowed into the Royal York after all. 0:40

The Calgary Stampeders were allowed to recreate the magic of the team's first Grey Cup victory when a Toronto hotel allowed a horse to enter the premises, just a few hours after locking the mascot and its entourage out.

Staff at the Fairmont Royal York Hotel on downtown Front Street West on Thursday morning initially refused to allow a contingent from Calgary to parade the horse — named Marty — through the hotel, as they had done in 1948.

News of the denial soon made the rounds on social media. The hotel later backtracked and extended an invite to Marty, an Ontario-bred horse standing in for the Stampeders' regular mascot Quick Six.

Marty walked through the front doors just after 2 p.m. amid a crush of reporters and Calgary supporters.

The stunt comes as Toronto gears up for Sunday's championship game at the Rogers Centre against the hometown Argonauts. The game itself had its own equine controversy — it didn't appear that the Stampeders would be allowed to bring a horse into the stadium.

That issue was resolved Thursday after the CFL and the Stampeders reached a compromise on the idea. The CFL said that "due to a lack of available space and resulting safety concerns," the horse won't be allowed to gallop up and down the sideline after a touchdown, as the Stampeders had hoped.

"But the CFL is happy to announce that one of Canadian football's fine traditions — Calgary's touchdown horse — will be part of Grey Cup history once again," the CFL said in a statement.

It's not clear whether the Stampeders' regular mascot, Quick Six, or a stand-in like Marty will be present at the game.

Marty had an eventful morning Thursday. After the Calgary contingent tried unsuccessfully to persuade hotel staff to let them enter with the horse at around 10:20 a.m., a group photo was taken in front of the hotel.

He was then led up University Avenue to First Canadian Place.

Upon entering the building, Marty was allowed into a branch of the Bank of Montreal, where a bank executive took a turn riding him.

Calgary football fans remember 1948 fondly. It was the year the Alberta city won its first Grey Cup, and saw local fans bring pageantry to the championship festivities in Toronto.

The 100th Grey Cup game will be held this Sunday at Rogers Centre.