Toronto police confirm there is a link between the three deaths involving a crossbow in east Toronto and a suspicious package found in the downtown area of the city.

Toronto police confirm there is a link between the three deaths involving a crossbow in east Toronto and a suspicious package found in the downtown area of the city. No further details were provided.

Earlier Thursday, police revealed that three people are dead, all of whom were found with apparent crossbow injuries, in the Scarborough area of Toronto on Thursday afternoon. A source with knowledge of the investigation said it's believed all three deceased are related, CBC News has learned.

Police said the bodies of two men and a woman were found in a garage. Two people were found with no vital signs, and one person died after officers arrived, police confirmed.

"We have a lot of work to do," Det. Sgt. Mike Carbone said four hours into the police investigation. "We still have a ways to go."

The identities of the victims are not being released until next of kin are notified, Carbone said.

Paramedics said another man was taken to hospital with injuries that were not serious. "He was another victim," spokesman Evert Steenge revealed.

Police have also confirmed that a 35-year-old male suspect, who has injuries, is being held in custody. 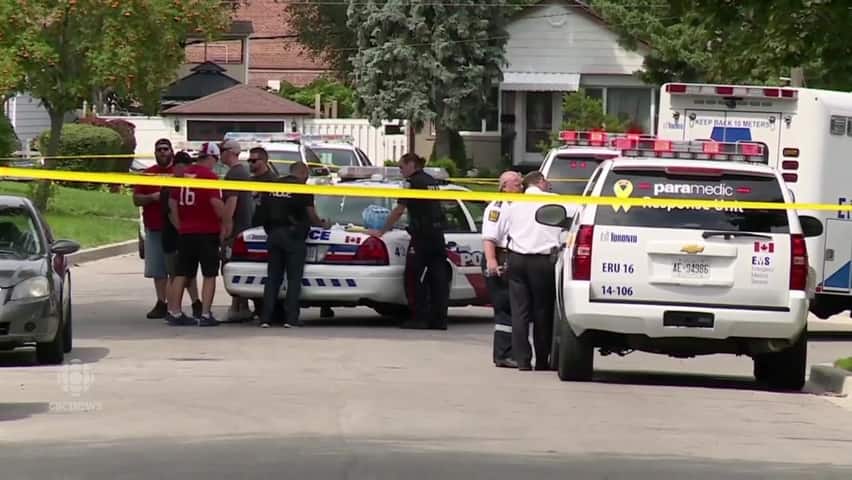 4 years agoVideo
0:24
Three people are dead, including at least one who was found with an apparent crossbow injury in Scarborough. 0:24Police responded to a report of a stabbing at around 1 p.m. ET on Lawndale Road near Markham Road and Eglinton Avenue East, Const. David Hopkinson told CBC News.

"Indications were that [a] person had been stabbed — their injuries were fairly serious," Hopkinson said. "When officers arrived, they found that person and two others suffering from injuries from what we believe to be a crossbow bolt."

Police said a crossbow was found on the floor of the garage.

"We don't have any idea with regards to why this may have happened," said Hopkinson.

Const. Jenifferjit Sidhu said there were other "things" found in the area that could have been used as weapons.

Neighbour Jerome Cruz told CBC News that he heard screams before things went silent and said it sounded like a fight in the garage.

"It was going on for about five minutes — the screaming," he explained. "After that, all quiet."

Cruz said he's lived in the area for the past two years and said the people who reside in the house where the incident took place are normally "very quiet."

Neighbour near crossbow attack heard screams, then silence. <a href="https://t.co/1RwalICnsZ">pic.twitter.com/1RwalICnsZ</a>

"It was very strange to hear a big noise and screaming," Cruz said.

"We are looking to speak to anyone that may have information," Hopkinson said.

Nearby streets, including Knowlton Drive, Lockleven Drive and Glenda Road, are closed and the police homicide unit has taken over the investigation.

A bolt is a crossbow projectile that is under 40.6 centimetres (16 inches) in length, according to Phillip Bednar of TenPoint Crossbow Technologies, adding that anything longer is considered an arrow.

Dale Lounsbury, who sells crossbows at a sporting goods store in Waterloo, Ont., and owns one himself, said they can be dangerous due to their power and accuracy, but they are not suited to firing multiple shots in quick succession.

Unlike guns, no licence is required to buy or own a crossbow.

This isn't the first time a person has been killed by a crossbow bolt in the city. In December 2010, a man fired a bolt into his father's back at a Toronto Public Library branch before crushing the 52-year-old man's skull with a hammer.

Zhou Fang was charged with first-degree murder but accepted a plea for second-degree murder after it was revealed that he was the victim of long-term abuse by his father. Fang, then 26, was sentenced to life in prison in 2012.

With files from Trevor Dunn, The Canadian Press and Reuters