Toronto police Chief Mark Saunders says a 27-year-old man is under arrest after two members of the Canadian Forces were stabbed in north Toronto earlier on Monday. 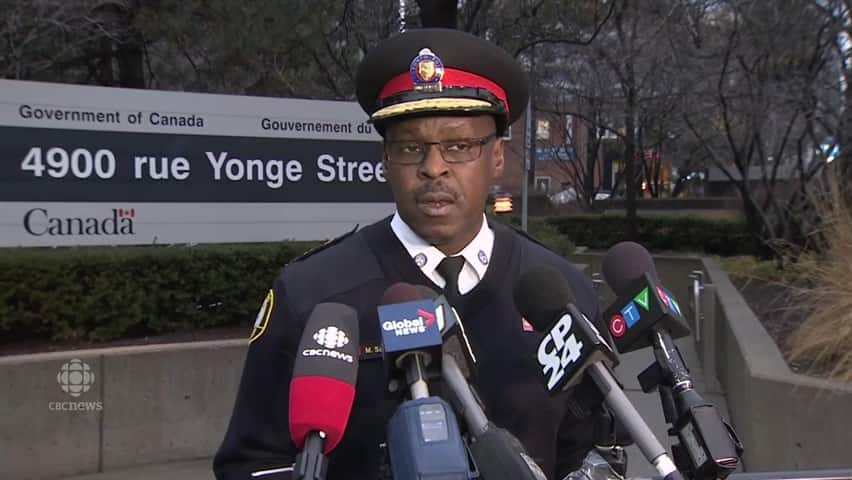 5 years agoVideo
3:39
Toronto police Chief Mark Saunders says a 27-year-old man is under arrest after two members of the Canadian Forces were stabbed in north Toronto earlier on Monday. 3:39

Toronto police Chief Mark Saunders says a 27-year-old man is under arrest after two members of the Canadian Forces were stabbed in north Toronto earlier on Monday.

A man walked into the recruitment centre, pulled out a knife and attacked the person behind the counter, Saunders said. The attacker attempted to move farther into the building, but was taken down by a group of between six and eight soldiers, the chief said.

One soldier was cut while apprehending the man, DND confirmed.

The two people who were injured suffered non-life-threatening injuries and were treated in hospital.

"We're fortunate that the Canadian Forces, through their training, reacted," Saunders told reporters, adding the injuries could have been "much more severe" had they not stopped the attack.

The chief also said the suspect uttered "certain comments" that are of concern, but declined to say what they were.

The suspect uttered the word "Allah" the Toronto Sun reports, citing police sources. A source with knowledge of the investigation has also told CBC News the same thing.

Saunders said police are strongly considering the possibility that the attack was an act of terrorism, but he said it's still early in the investigation.

"I want a full understanding of what was said, so I'm not giving bits and pieces," he said.

The suspect is currently being held in custody in hospital.

DND issued a statement about the attack late Monday saying it would work with local police to help the investigation.

"No suspicious activity had been observed by Canadian Armed Forces members who work in that location prior to the incident," DND said in its statement.

My thoughts are with the <a href="https://twitter.com/CanadianForces">@CanadianForces</a> members injured today in Toronto. and with those who responded bravely in the face of danger.

"While it is premature to comment as an investigation is ongoing, the information the RCMP has at this point suggests this is an isolated incident and that there is no imminent threat to public safety," said Goodale in a statement.

"Canadians can be assured that their police and security agencies are fully engaged and are discharging their responsibilities. My thoughts are with the victims and their families."

Mayor John Tory said he was "saddened" to hear about the attack and that his office is monitoring the situation closely.

He also wished those injured a quick recovery.

Interim Conservative Leader Rona Ambrose, meanwhile, lauded the bravery of the soldiers who subdued the attacker.

"Their bravery is a reflection of the high standards set by the Canadian Forces in all they do, at home and around the world," she said in a news release.

Toronto police have also contacted CSIS and other police forces about the attack.

"As this situation is presently under investigation by Toronto Police, the service does not have any comment," a CSIS spokesperson said in an emailed statement.

Anyone who was in the area at the time or who has information about the incident is being asked to contact police directly or Crime Stoppers anonymously.