Christmas for Evan: Family amazed at support from St. George, Ont., and the world

Santa Claus came early to St. George, Ont., this year. The small town rallied this week to bring Christmas to Evan Leversage, a seven-year-old boy who has been battling brain cancer since he was two.

'Our biggest memory will be the amount of people who came out and supported us,' boy's mom says

Evan Leversage woke up Sunday still aglow with the Christmas spirit, after his small town of St. George, Ont., brought him Santa, SpongeBob and an entire parade the night before.

The seven-year-old has been battling brain cancer for five years. His family says they are still overwhelmed by the response from their town — and from the presents and messages that have reached them from all over the world.

"Many times I have told people [that] Evan is my inspiration," his mother, Nicole Wellwood, told CBC News on Sunday. "The whole wide world became my inspiration last night."

When Evan's family learned that their son's brain tumour had spread, they decided to celebrate the holidays early this year, at the suggestion of their doctors.

About 7,000 people joined Saturday's celebrations, more than double the population of this small town 30 kilometres west of Hamilton. They lined Evan's street, cheering as he passed by the light-strewn houses next to Santa in his sleigh. 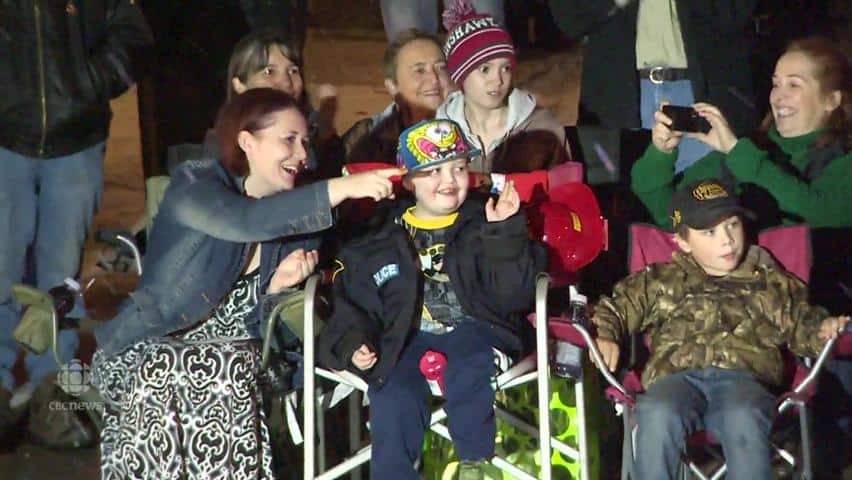 "When Evan was diagnosed, what our family planned to do was raise awareness for childhood cancer, and yesterday was a testament to that," Wellwood said, holding her squirming, smiling son. "The parade was for Evan, but in our family's heart, we were thinking about all the other children in the same position.... They were in our hearts as well last night."

That's because Evan's story reaches beyond the little boy, encompassing the generosity of his small town and the kindness of strangers a world away. As shopkeepers and residents began stringing lights, wrapping presents and unrolling fake snow on Evan's lawn, journalists from around the world took notice as reports about Evan and St. George appeared on British, Irish and American media sites, as well as in newspapers all over Canada.

"This has brought a lot of amazing people into my life," Wellwood said. "I've had a lot of other gold ribbon families reach out to me with stories about their children."

The gold ribbons symbolize childhood cancer. Several survivors also travelled to the town of 3,000 this week, to offer support and hope to Wellwood, Evan and their family.

But the highlight for Evan was Saturday's parade, as well as a note from SpongeBob in the morning promising that he would make an appearance later that night.

The zany cartoon character kept his word, ambling up Evan's driveway as more than two dozen floats drove by.

"The smile that got from Evan, he lit right up," Wellwood said. "But I think our biggest memory will be the amount of people who came out and supported us."