Toronto is under an extreme cold warning in the wake of a major winter storm that dumped more than 20 centimetres of snow on the city.

Bitter temperatures expected to stick around until Friday

A frigid mass of arctic air is settling over southern Ontario, bringing with it wind chill values as low as –35 from Tuesday night right through to Friday morning.

Environment Canada has issued an extreme cold warning for the city, warning of the risk of frostbite developing "within minutes on exposed skin."

The cold follows a major winter storm that dumped more than 20 centimetres of snow on the city, which made the morning commute painful for many on Tuesday. 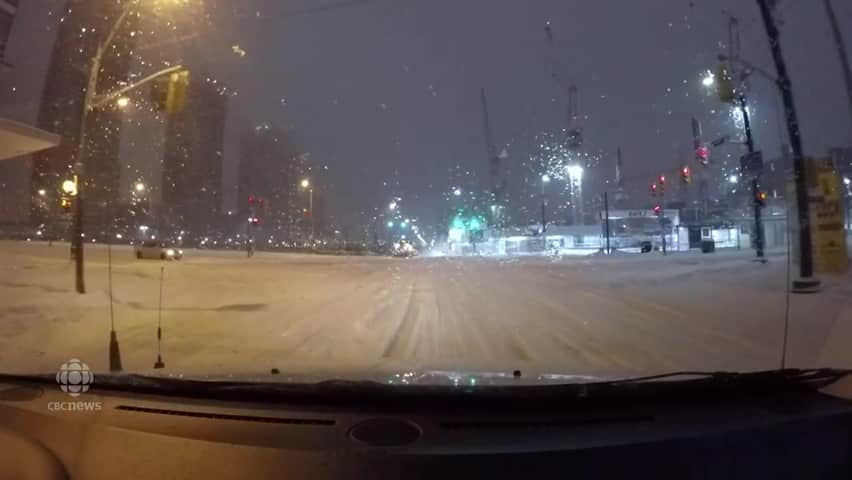 A snowy night in Toronto

In the Greater Toronto Area, roads were slippery for hours following the storm, provincial police said.

"A lot of secondary roads are still snow-covered."

Schmidt said the OPP dealt with about two dozens crashes in the GTA on Tuesday morning.

In Whitby, Ont., for example, a crash involving a transport truck closed westbound lanes of Highway 401 at Thickson Road South. All eastbound lanes are now open. The driver was taken to hospital with minor injuries.

The truck was carrying hazardous material and cleanup was underway after some of it leaked, Schmidt said. The crash was weather related, he added, because there was blowing snow on the highway at the time.

The truck is now upright.

As for plowing early Tuesday, major highways were cleared as of 6 a.m. ET, Schmidt said.

Schmidt reminded drivers to clear snow from their cars before setting out and to give themselves extra time.

Shortly after noon, a pipe burst in the pedestrian tunnel that leads to Billy Bishop Toronto City Airport. Crews shut off the valve and are cleaning up residual water. Passengers are being directed to the ferry until the cleanup is done.

33 cm of snow fell at Pearson

Toronto's Pearson International Airport recorded about 33 centimetres of snow in total from the storm, which began at about noon on Monday and ended at about 3 a.m. on Tuesday, Environment Canada said.

The GTA got the highest snowfall amounts of anywhere in the province because of easterly winds coming off the Great Lakes, said Peter Kimbell, warning preparedness meteorologist for Environment Canada, based in Ottawa.

Kimbell said Monday's total of 26.4 centimetres at Pearson did not break a record, but it was the highest snowfall amount recorded at the airport since Feb. 6, 2008, when 30.4 centimetres of snow fell.

The weather caused a number of major delays and cancellations across the Toronto Transit Commission system.

The Line 3 Scarborough RT remained out of service on Tuesday, but shuttle buses were available.

Things improving slowly on <a href="https://twitter.com/hashtag/TTC?src=hash&amp;ref_src=twsrc%5Etfw">#TTC</a> surface routes. Express bus service is being reinstated this afternoon, but Line 3 Scarborough will be served by shuttle buses for the rest of service today. We'll spend the night trying to get things up and running for the morning rush hour.

A signal issue on Line 2 at Pape station caused "longer than normal travel times" westbound from Woodbine to Yonge stations.

Some GO transit buses were also cancelled, and some trains were delayed.

No school in Peel, Halton regions

In Toronto, Crestwood Preparatory School and both Leo Baeck day schools were closed, as were all schools in the Hamilton-Wentworth District School Board.

Sheridan College, meanwhile, opted to close and cancel all classes for the day.

On Tuesday morning, Toronto Pearson International Airport reported some flights had been cancelled.

That's nothing compared to the situation Monday, when a third of all flights leaving Pearson were cancelled.

Still, it's worth checking the airport's arrivals and departures board to check on the status of your flight.