The Snowbirds team is doing a flyby of eastern and southern Ontario on Sunday.

Team doing a flyby of eastern and southern Ontario on Sunday 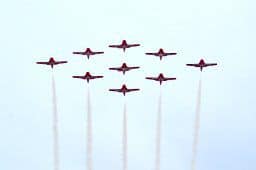 The Snowbirds have resumed their cross-country salute to Canadians helping fight the spread of COVID-19 after wintry weather forced them to hold on Saturday.

The team is doing a flyby of eastern and southern Ontario today on the latest leg of Operation Inspiration.

The Twitter account of the Canadian Armed Forces aerobatics team says they took off on time from Trenton, Ont., on Sunday morning.

The planes flew from Trenton to Toronto, before a scheduled take off for London at 12:45 p.m. The team is set to fly from London to Barrie at 4:15 p.m.

Snow and hail grounded the fleet at Canadian Forces Base Trenton on Saturday.

The Snowbirds encourage Canadians to observe the flyovers from the safety of their home and refrain from travelling to see the show.

The Snowbirds initially paused their training in March because of COVID-19 and delayed the start of their flying season, which was to begin in June.