A man who was shot dead and left on an Etobicoke street this past summer had expressed concerns about his safety prior to his death. 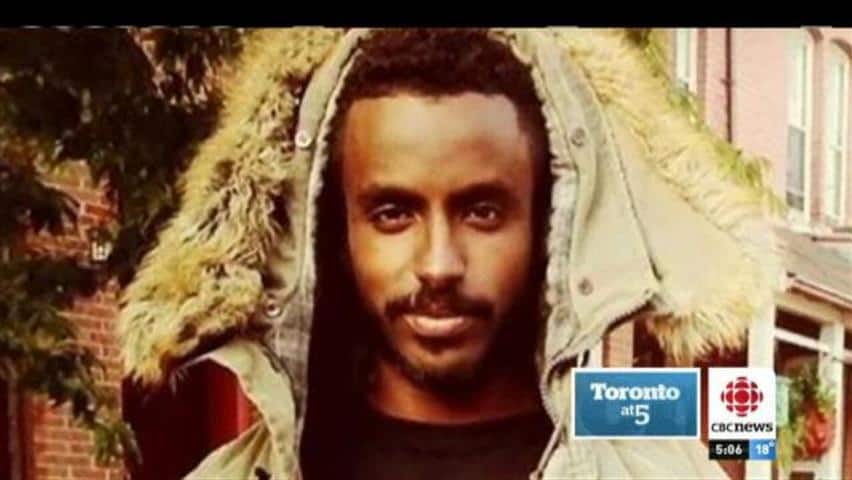 8 years agoVideo
2:18
A man who was shot dead and left on an Etobicoke street this past summer had expressed concerns about his safety. 2:18

A man who was shot dead and left on an Etobicoke street this past summer had expressed concerns about his safety prior to his death.

Abdulle Elmi, 25, was last seen alive in the early hours of July 5, in the downtown area of Yonge and College.

His body was later found on Meadowbank Road, near Highway 427 and Burnhamthorpe Road.

A month before his death, Elmi’s cousin, Ahmed Hassan, was killed in a deadly shooting in the basement food court of Toronto’s Eaton Centre.

Somali-Canadian homicide victims in Toronto in 2012

Ahmed Hassan was shot and killed in a shooting in the food court at the Eaton Centre on June 2.

Hussein Hussein was pronounced dead after being found shot in a North York apartment building on June 23.

Abdulle Elmi was found dead on Meadowbank Road in Etobicoke after being shot several times on July 5.

Abdulaziz Farah was found with gunshot wounds on Fawcett Trail in Scarborough on September 8.

Suleiman Ali and Warsame Ali were both found with gunshot wounds to the head in an alley near Jamestown Crescent on September 18.

CBC News has learned that Hassan and the other man who died as a result of the Eaton Centre shooting, Nixon Nirmalendran, were both in Elmi’s apartment just minutes before they were killed.

Following the violence at the Eaton Centre, Elmi had talked about the need to protect himself.

According to his surviving girlfriend, he had even mused about obtaining a weapon to do so.

"Right after Ahmed passed away, [Elmi] said: ‘You know sweetheart, I need a gun. It’s scary how your life can just be taken away in a second," she told CBC News in a recent interview.

CBC News has agreed not to publicly identify Elmi’s girlfriend as she fears for her safety.

Though police have alleged that Hassan and Nirmalendran were members of a street gang, they have not made any suggestions that Elmi had any criminal ties.

Elmi’s girlfriend said she "didn’t ask a lot of questions…because to me it doesn’t matter, like, what sort of things they’re doing. I’d rather not know."

But she said Elmi was on a different path — he didn’t have a criminal record and he was a student.

Both Elmi and his cousin are buried alongside each other in a cemetery near Jane Street and Steeles Avenue.

They are among six Somali-Canadian men who have been killed in Toronto since the start of June.

With a report from the CBC's Kimberly Gale