A man who swam naked at Ripley's Aquarium of Canada in downtown Toronto late Friday is wanted in a violent assault earlier in the evening, Toronto police say.

A man who swam naked among sharks at Ripley's Aquarium of Canada in downtown Toronto late Friday is wanted in connection with a violent assault earlier in the evening, police say.

Police have identified him as David Weaver, 37, of Nelson, B.C. He is wanted for assault causing bodily harm.

He is believed to be driving a green Dodge Caravan with the B.C. licence plate PL120G. Police say he is five-foot, 10 inches tall, about 220 pounds, with a heavy build. He has a shaved head, goatee and missing teeth.

Police spokesperson Katrina Arrogante said investigators from the city's west-end 14 Division and the downtown 52 Division connected the incidents on Monday.

The assault took place outside the Medieval Times attraction at Exhibition Place around 8 p.m. ET Friday, and the victim suffered serious injuries, police said. It's believed the assailant fled and headed to the aquarium, around five kilometres east. Officers were called to the popular tourist attraction two hours later.

A minute-long video, shot at the aquarium and posted on YouTube, shows a man taking off his clothes and diving into the Dangerous Lagoon, a 2.9-million-litre tank that offers an underwater gallery to dozens of marine animals, including 17 sharks.

The man can be seen doing the breaststroke on the surface of the water while sand tiger sharks swim within centimetres of his feet.

I was scared I was going to witness the death of this guy.- Erinn   Acland , witness

Green sawfish, green sea turtles, green moray eels and other species of tropical fish are also housed in the tank, according to the aquarium's website.

Security personnel asked the man to leave shortly before 10:30 p.m. ET but he refused, said Jenifferjit Sidhu, a spokesperson for Toronto Police Service.

Instead, he swam to the edge of the enclosure and emerged from the tank before doing a backward flip into the water. Police were called. 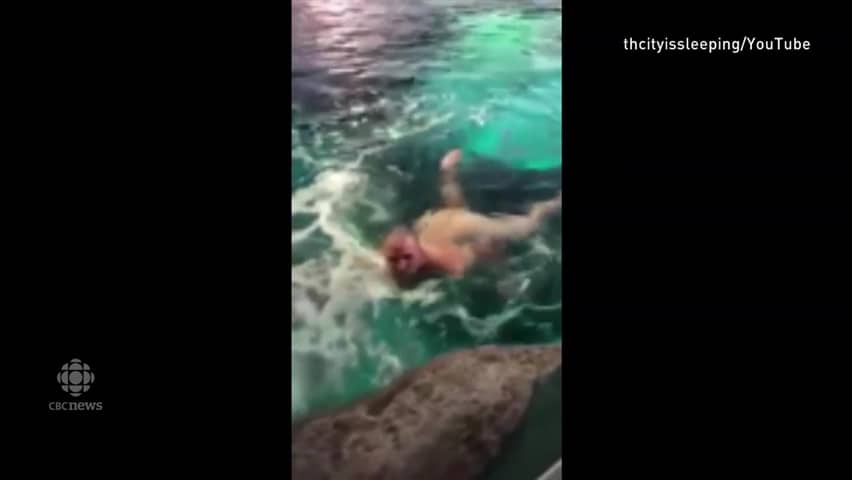 Watch a man skinny dip with sharks at Ripley's Aquarium

2 years agoVideo
0:55
A nude swimmer dove into the shark tank in Toronto’s Ripley’s Aquarium. No marine animals were harmed, but Toronto Police said the stunt was "extremely dangerous." 0:55

Visitor Erinn Acland said she heard the "big splash" and thought the trainers were feeding the sharks. As Acland and her boyfriend approached it, she said, they saw a man in the water.

"The guy seemed totally relaxed and there were sharks, like, everywhere," she told CBC Toronto. "He appeared to be totally nude and, like, laughing."

Acland described the display as unexpected and horrifying.

"I don't know what would possess someone to do that. It's totally insane to me," she explained.

"I was scared I was going to witness the death of this guy."

But before officers arrived, the man got out of the water.

The video shows him walking past security standing on the edge of the tank, jump the gate and slip into a crowd of onlookers where a woman appears to be holding his clothes. He put them on and left the aquarium at the request of security, Sidhu said.

No marine animals were harmed, she said, while adding that the stunt was "extremely dangerous."

We plan to press charges to the full extent of the law.— Peter Doyle, general manager of Ripley's Aquarium

"It's very dangerous for both the individual as well as our animals," he told CBC Toronto.

"An animal's health and welfare is paramount to what we do so… we plan to press charges to the full extent of the law."

Though the animals ignored the man, they are unpredictable, Doyle said.

"Whenever you jump in with wild animals — whether you scare a dog, you scare a shark — it can be very serious," he said.

Doyle said the incident was the first of its kind in the five years since the aquarium opened.

The aquarium was hosting a monthly Friday night jazz event, which has a cash bar and live music until 11 p.m.

Amara McLaughlin is a social producer with CBC News, CBC Marketplace and The Fifth Estate in Toronto.