Front-line police officers who carry stun guns and deal with people in crisis should also be equipped with body-mounted cameras, according to a report into police use of force that was undertaken after the shooting death of 18-year-old Sammy Yatim. 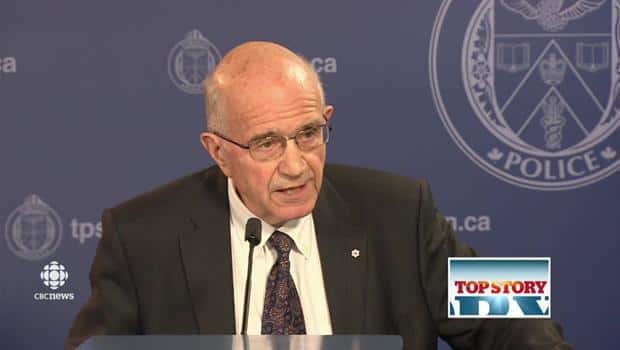 Use of force report

7 years ago
3:57
Frank Iacobucci's report on the lethal use of police force was released today. 3:57

Front-line police officers who carry stun guns and deal with people in crisis should be equipped with body-worn cameras, according to a report into police use of force that was spurred by last year's fatal shooting of 18-year-old Sammy Yatim aboard a Toronto streetcar.

Expanded use of cameras is one of 84 recommendations contained in the report written by former Supreme Court justice Frank Iacobucci and released Thursday.

The report focuses on how police deal with emotionally disturbed and/or mentally disturbed individuals, a group Iacobucci calls "people in crisis." Its recommendations include:

"Causing the death of a person who needs help is a police officer's nightmare," he said. "People in crisis are our brothers, sisters, parents and children," he said. "They are not apart from us, they are part of us."

The review involved more than 100 interviews and the analysis of more than 1,200 documents, as well as submissions from the public.

Iacobucci noted that his report was not about laying blame on anyone but rather was meant to consider how lethal outcomes can be prevented in the future.

"The premise of the report is that the target should be zero deaths when police interact with a member of the public," he said.

Yatim's shooting aboard an empty streetcar last summer caused outrage and prompted calls for police to review how they handle confrontations involving people with a history of mental illness. The shooting was captured by cellphone cameras and distributed widely online.

Nine shots can be heard on the videos following police shouts for Yatim to drop a small fold-up knife he was carrying. The final six shots appeared to come after Yatim had already fallen backwards to the floor of the streetcar.

Following the death of Yatim, Const. James Forcillo was charged with second-degree murder.

In a lawsuit filed with Ontario Superior Court last October, Yatim's mother and sister are seeking more than $7 million from Forcillo, the police services board, Blair and two other officers.

According to the lawsuit — which is not proven and to which no defence has been filed — Forcillo fired at Yatim in the early hours of that summer day last year. At the time, Yatim was alone on the streetcar, which was surrounded by about 20 officers.