'It's a new life for me': Libyan-Canadian businessman Salim Alaradi returns to Canada

Libyan-Canadian businessman Salim Alaradi has returned to Canada, after nearly two years in detention in the United Arab Emirates.

'I am home today because thousands of people in Canada and from the world spoke out,' Alaradi says 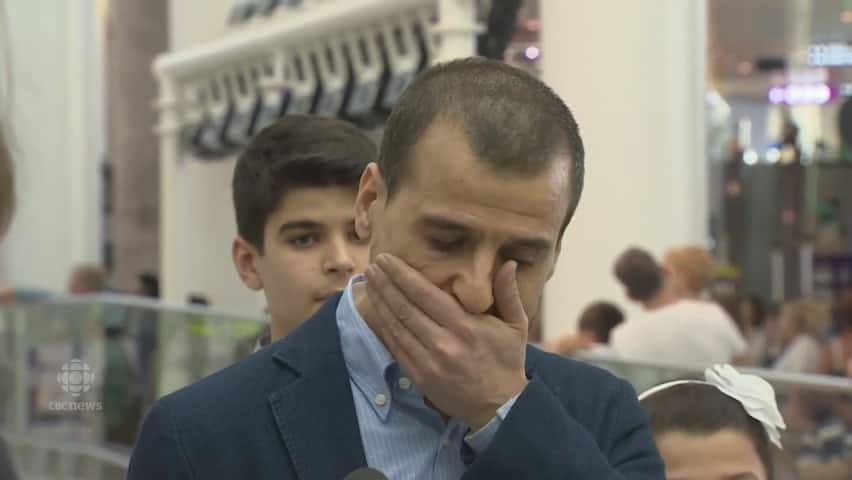 4 years ago
1:01
A Libyan-Canadian businessman who spent nearly two years in detention in the United Arab Emirates has returned to Canada. 1:01

A Libyan-Canadian businessman who spent nearly two years in detention in the United Arab Emirates has returned to Canada.

"I am home today because thousands of people in Canada and from the world spoke out. I'm grateful to each of you," he said.

Alaradi told reporters he had no words to describe his emotion at seeing his wife and children after the ordeal. He grew emotional as he described finishing the vacation that he had started with his family before he was arrested.

Alaradi was taken from a hotel room in August 2014 and had been in custody ever since. According to Paul Champ, an Ottawa human rights lawyer hired by Alaradi's family in Canada, the businessman manufactures appliances in the U.A.E. and sells them in the Middle East and Africa.

​After first spending 17 months in a U.A.E. prison, the Windsor, Ont., businessman was charged with several terrorism-related charges in January 2016.​ Those charges were dropped in March 2016. Alaradi was then charged with collecting donations without permission of the appropriate ministry and sending them to a foreign country.

In May, Alaradi was acquitted with a judge saying the evidence did not meet the latest charge against him, according to Champ.

The Canadian businessman arrived in Istanbul on June 2, where he was reunited with his wife and children. After two weeks of medical evaluation, Turkish doctors authorized his transfer to Canada.

Alaradi's daughter Marwa led the social media campaign for her father's freedom, advocated for him through Twitter, Facebook and videos.

Her advice to anyone who faces an ordeal like hers: "Just speak up and don't be silent. Just tell the world what you're going through. You will find help."