One of the most valuable stamp collections in Canadian history will be sold off in a series of auctions, the first of which will occur next month. 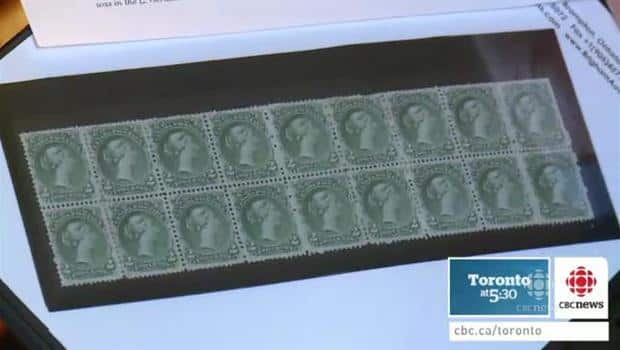 7 years ago
2:07
One of the most valuable stamp collections in Canada will soon be sold. 2:07

Ron Brigham has built up a Canadian stamp collection that is considered to be amongst the greatest of its kind.

Over the years, the well-known collector from Brampton, Ont., has gathered material so rare that Canada Post once had to borrow some one-of-a-kind dyes to recreate a historic stamp.

Brigham’s unique collection will be sold off in a series of auctions in the years ahead. The first of those sales will take place next month.

"No Canadian stamp has ever sold for $1 million before," Brigham said in a recent interview with CBC News.

"We think there’s three, four, maybe six in this collection that might sell for that price."

Sam Hakim of the Century Stamp Co. of Mississauga, Ont., says that what Brigham is putting up for auction is "probably the most significant collection ever to come on the market."

In Hakim’s opinion, Brigham has managed to obtain some treasures that almost never come up for sale.

"He’s acquired some extremely rare material that I’ve never seen that’s probably been in hiding for decades, so this is a lifetime opportunity for the serious collector," Hakim said.

It is believed that the sale of Brigham’s full collection will bring a return of some $10 million to $25 million.

Click on the video above to see a full report from the CBC's Steven Bull.