University of Toronto researchers unveiled a talking, walking robot on Tuesday — a new tool his creators feel could be the future of treatment for Alzheimer's and dementia patients. 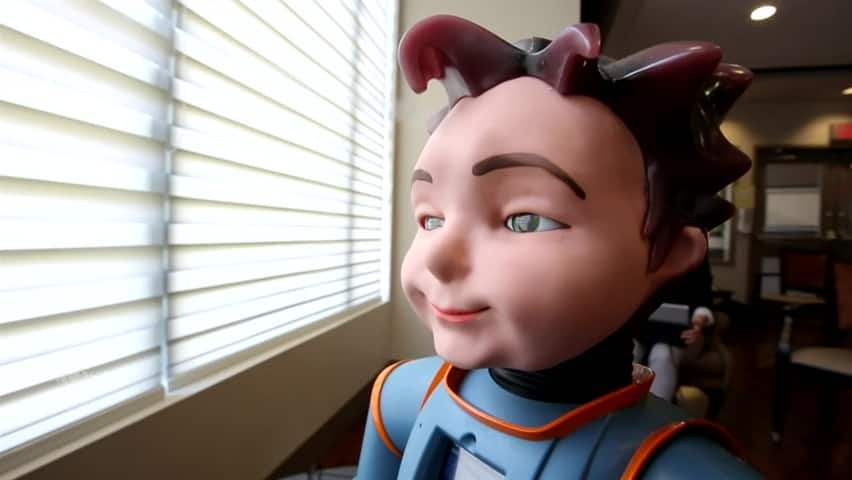 5 years ago
0:52
He looks like a boy and acts like one, moving, talking and interacting with those suffering from Alzheimer's disease and dementia. 0:52

Brenda Horenfeldt was wowed Tuesday by a talking, walking robot — a new tool his creators feel could be the future of treatment for Alzheimer's and dementia patients.

Developed by a research team at the University of Toronto with the support of Mitacs, a national non-profit organization, Ludwig was unveiled at One Kenton Place, a retirement home in North York that cares for people with Alzheimer's and dementia.

Horenfeldt's mother, Florence Sherman, 86, has been at One Kenton since January. Horenfeldt called the creation that nods, smiles and gestures with its hands "amazing" and described its interaction with her mother as "wonderful."

"The way he's dressed, his facial expression, everything about him is wonderful," she told CBC News. "He's cheerful, he's happy and I think he's going to interact really well with the residents."

Horenfeldt's daughter, Bailey, said watching her grandmother speak with Ludwig "was the most amazing experience."

"This little guy is really cute, he'll put a lot of smiles on people's faces," she said, adding that her grandmother "has drastically changed since coming here."

Frank Rudzicz, a scientist and an assistant computer science professor at U of T, said robotics is increasingly being used in health care settings.

"Some companies have used robots to talk to kids with autism. They find speech interaction with humans they don't recognize to be a little bit stressful, whereas robots can be straightforward, simple and fun," he explained.

"There have been good outcomes interacting with robots and we're hoping to repeat that success with adults with Alzheimer's."

He said the research team has big plans for Ludwig, which was custom built for $3,000 by RoboKind, a company in Texas.

The group is also exploring how the robot can sense someone's cognitive state may be changing based on the way they speak. And a longer term project is developing its ability "to detect when someone's confused or not interested in conversation," Rudzicz said.

"Over next three months, we'll be getting him to talk to residents and trying to figure out what ways he talks are most useful to a free-flowing conversation," explained Rudzicz. "When we learn that, we'll build that into the robot."

Following the pilot project, the team hopes to roll out similar robots at organizations across Canada that cater to people with Alzheimer's disease and dementia.

Stefania Raimondo, who's also involved in the project, says — as of now — she's in charge of what the robot can say.

"This allows for human-like flexibility," she told CBC. "The other mode, which we're working on, is autonomous mode. That's where the robot listens to the speech and transcribes the audio into text."

Raimondo said she got involved in the project because she's interested in "the health applications of artificial intelligence."

And, she added, "You don't always get the opportunity to see your research actually get out there and make positive change."