Saying the death of former mayor Rob Ford leaves a "hollow feeling" at Toronto City Hall, Mayor John Tory praised a man who "crammed an incredible amount into far too short a life."

Former mayor remembered as 'fighter to the end' who championed taxpayers 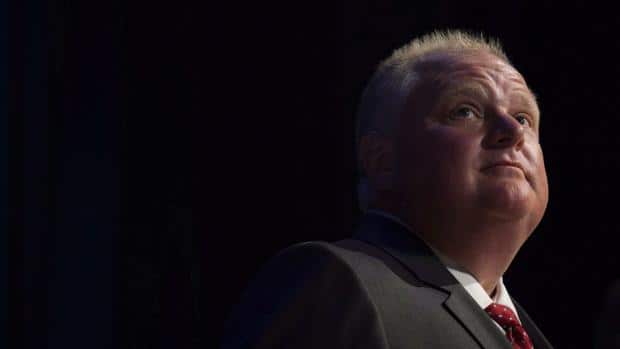 5 years ago
1:53
Politicians and community react to former mayor's passing 1:53

The brother of the late Rob Ford told CP24 he was devastated by the former mayor's death.

"My heart is ripped out," said Doug Ford. "I loved Rob so much. I took care of him and protected him from the day he was born.

"I miss him so much," the former Toronto city councillor added. "He was my best friend."

The former mayor's death drew immediate and widespread condolences from across the political spectrum, with friends and adversaries alike praising Toronto's former mayor as a fighter to the end.

Ford died surrounded by his family at Toronto's Mt. Sinai hospital Tuesday. He was 46.

One of the first to comment on Ford's death was Coun. Norm Kelly, who served as deputy mayor during Ford's time as mayor.

"I feel very, very sad for his family," Kelly told CBC this morning. Kelly almost became mayor in 2013 when the drug-use scandal surrounding Ford prompted city councillors to strip him of most of his official duties as mayor. 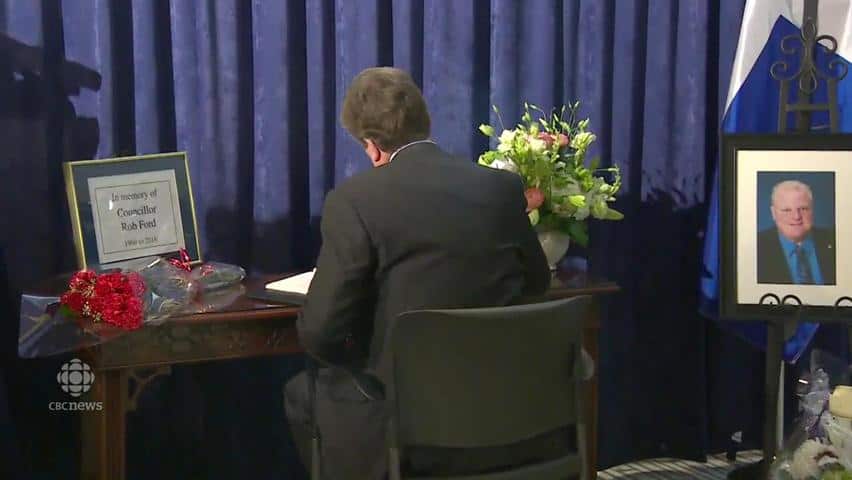 5 years ago
0:40
Saying the death of former mayor Rob Ford leaves a "hollow feeling" at Toronto City Hall, Mayor John Tory praised on Tuesday a man who "crammed an incredible amount into far too short a life." 0:40

Ontario Premier Kathleen Wynne praised Ford in a statement for continuing his family's "strong tradition of political involvement." She noted that even though poor health forced him out of the 2014 mayoralty race, he opted to run for council, winning a council race in Ward 2.

"Rob Ford earned widespread respect for his unwavering persistence in the face of serious health concerns — which he summed up in a statement released from his hospital bed during the 2014 campaign: 'Be strong, stay positive and never, ever give up," said Wynne.

Tory, like many others, spoke about Ford's ability to talk directly with voters across the city.

"He was a man who spoke his mind and who ran for office because of the deeply felt convictions that he had," he said.

"As a councillor, mayor and private citizen, Rob Ford reached out directly to people across the city with a phone call, an offer of advice or support, and I know there are many who were affected by his gregarious nature and approach to public service.

"His time in City Hall included moments of kindness, of generosity to his council colleagues and real efforts to do what he thought was best for Toronto. He was, above all else, a profoundly human guy whose presence in our city will be missed."

Like many others, former Toronto councillor Doug Holyday mentioned Ford's penchant for personally answering calls from constituents, even after he went from a council seat to the mayor's chair.

"I just hope people will remember Rob Ford for the good things he did for them," he said.  "He answered phone calls … he would come to their house … and try to fix things."

"He stood up to a lot of things that a lot of people before him wouldn't …. Rob said 'we'll take the fight' and try to do things right."

"I think Rob's legacy will be firstly his total commitment to the residents of Toronto in terms of running a small and efficient government," he said.

Ford's former chief of staff Mark Towhey said Ford was a polarizing figure who "put city politics on the map."

'Fighter to the end'

Towhey was fired by Ford in 2013 after imploring the mayor to get help, as the drug-use scandal began to envelop the mayor's office.

Although he knew Ford was very sick, Towhey said he was surprised at this morning's news.

"He's a guy you never thought he would succumb," he said. "He was a fighter to the end."

Despite their differences, Towhey praised Ford for bringing a "service industry" approach to the job, "not just lofty goals."

In October, Towhey co-published a book that chronicled his turbulent time working for Ford.

"He was a very passionate man," she said. "He had flaws, like any human being."

She said despite Ford's public battles with addiction, "he had this big heart, and he always wanted to do the right thing, especially when it came to youth matters."

In a tweet, Prime Minister Justin Trudeau issued his condolences to the family and praised the former mayor for fighting cancer with "courage and determination."

Rob Ford fought cancer with courage and determination. My condolences and best wishes to the Ford family today.

Former prime minister Stephen Harper praised Ford on Twitter as a "fighter throughout life and a dedicated public servant who will be remembered for his courage, love for Toronto and his family."

Rob was a fighter throughout life &amp; dedicated public servant who will be remembered for his courage, love for Toronto &amp; his family. 1/2

Rob Ford's nephew, 22-year-old Michael 'Mikey' Ford, had kind words for his uncle, whom he followed into politics to serve as a Toronto District School Board trustee.

"Uncle Rob, you have fought the good fight long enough and now can rest in peace. Love you and will forever miss you," he tweeted.

Not long after news of Ford's death broke, supporters came to Nathan Phillips Square outside city hall to write tributes in chalk, something they did for Layton after his death in 2011. The illuminated Toronto sign near the square's skating rink will dim tonight in honour of Ford.

The flag outside city hall was almost immediately flown at half-mast, and a book of condolences was set up near the main entrance. By 1 p.m., there was a long line of people waiting to sign the book.

The Canadian flag outside City Hall at half mast to honour Rob Ford. <a href="https://t.co/Y2d0Gjp4JL">pic.twitter.com/Y2d0Gjp4JL</a>