Toronto Coun. Rob Ford was thrown out of council on Wednesday afternoon, after he refused to apologize for comments he made about city staff.

For the 2nd day in a row, the former mayor draws spotlight on floor of council 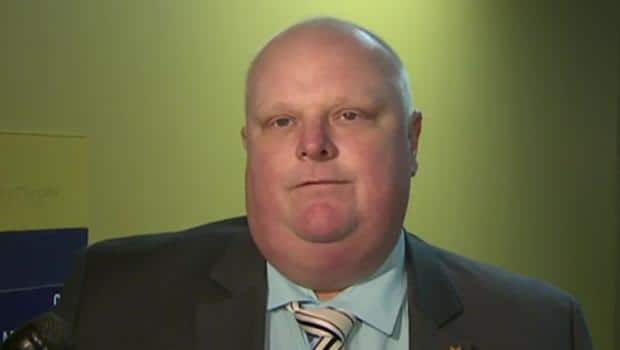 Ford reacts to being kicked out

Rob Ford may not be Toronto's mayor any more, but he's still finding his way to the spotlight.

The councillor was ejected from Toronto city council on Wednesday afternoon, after he refused to apologize for comments he made about city staff.

"There's something wrong with how the city hall works," Ford said, speaking with reporters after he was asked to leave council chambers.

The controversy arose after a report came to council about sending city staff and a councillor on a trip to Italy, as part of an effort to promote the city as a potential site for a future Expo.

The $20,000 cost of the trip was absent from the report, which led to a moment where Ford suggested it was "very hard to believe" the omission was unintentional.

That began the process that led the Speaker to ask Ford to leave the meeting.

Coun. Mary-Margaret McMahon then called for a retraction of the comments, which Ford said were grounded in his opinion. Nunziata then told Ford to retract the comments and to apologize.

The councillor demanded a recorded vote on the matter, but Nunziata informed him that wasn't warranted as she had made a ruling.

"Coun. Ford, I followed the procedure. I asked you three times to please retract your comments and apologize. That's how it works," Nunziata said, as Ford argued that she hadn't followed the proper procedures.

When Ford declined to apologize, he was asked to leave.

Coun. Giorgio Mammoliti then challenged the chair and a vote was taken. Council voted to uphold the ruling.

Outside council chambers, Mammoliti said that Ford shouldn't have been kicked out, and he took issue with the Speaker's handling of the situation.

"He has an opinion, we all have an opinion and that's called democracy," Mammoliti said.

"Chair Nunziata needs to get off her high horse and start riding a donkey for a while."

Asked to clarify the meaning of that statement, Mammoliti said, "I don't know what it means."

But most council members had supported Nunziata’s ruling.

Deputy Mayor Denzil Minnan-Wong was asked if he felt Ford should have been kicked out.

"I think that in order to get along, it would have been in Coun. Ford's best interest to make the apology and we all could have moved on. He decided not to do that," he said.

'Not a punching bag'

The incident came a day after Ford pressed Mayor John Tory about the cost of studying his SmartTrack rail transit plan.

The mayor, when asked about the exchange later in the day, told reporters he's "not a punching bag."

Minnan-Wong, asked to take stock of the controversies, said Ford "is who he is and he's going to do what he does."

When Tory was elected in October, Ford was no longer a mayoral contender, as he had dropped from the mayoral race after being diagnosed with cancer.

Ford instead ran for a council spot in Ward 2, which he won. That's why Toronto has ended up with a mayor and his immediate predecessor sitting as members of the same council.

Ford has said he plans to run for mayor again in 2018, provided he is healthy enough to do so.

During his single term as mayor Ford faced a series of controversies, including a drug-related scandal that made headlines around the world.

With files from the CBC's Jamie Strashin