Toronto Mayor Rob Ford flew to Chicago last week, but subsequently "withdrew" his request to enter the United States and ended up leaving the country, the consul general of Canada in Chicago tells CBC.

Lawyer confirms to CBC that Toronto mayor is getting treatment for addiction, but won't say where 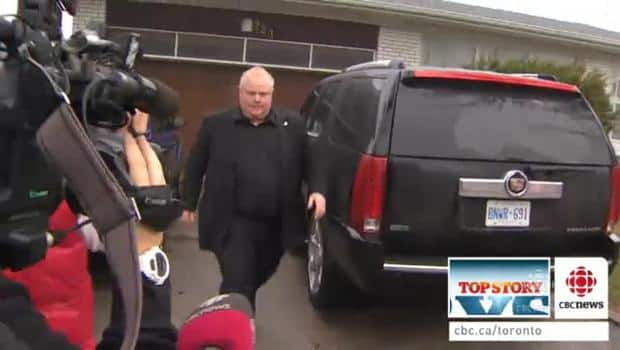 Ford away as council meets

7 years agoVideo
3:15
Council met for the first time since Mayor Ford took a leave of absence. 3:15

Toronto Mayor Rob Ford flew to Chicago last week, but subsequently "withdrew" his request to enter the United States and ended up leaving the country, according to the consul general of Canada in Chicago.

Roy Norton told CBC News in an email that officials with U.S. Customs and Border Protection had confirmed that Ford arrived in Illinois last Thursday.

But Norton said that "after discussion" with those officials, Ford "withdrew his request to enter the USA and departed."

The mayor’s trip came hours after Ford announced he was taking a leave of absence to seek help for substance abuse.

Lawyer won't say where mayor is

CBC News contacted Ford's lawyer Dennis Morris on Tuesday, and he confirmed the mayor is in treatment for addiction.

"The mayor is 100 per cent in rehab. I can assure you of that," Morris told the CBC's Dave Seglins.

Morris refused to divulge where his client is, or confirm whether Ford is in Canada or the United States.

Asked whether the public should believe Ford is actually in rehab, Morris told CBC that Ford's previous denials and lies about drug use and a video of him smoking crack are "hallmarks of someone with troubles."

"Yes, for the one-millionth time, Rob Ford is in a rehabilitation program," he said, declining to reveal the location.

The councillor said that if he identified the rehab centre, the media would be staking it out.

Coun. Denzil Minnan-Wong told reporters on Tuesday afternoon that he had received a call from the mayor who told him that he was in rehab.

Minnan-Wong said the mayor’s brother had passed a phone to him to let him know that the mayor wanted to speak to him.

"I was talking to him and I think it’s a difficult time for him," Minnan-Wong said. "He sounded like he was in good spirits, I think he was getting better."

Other members of council appeared split on whether the public should have more information about the mayor's treatment.

A similar mix of opinions were being tweeted on Tuesday, with some members of the public calling for the mayor to be left alone, and others wanting to know more about what is going on.

Unclear why mayor turned around

It is not clear why the mayor departed the U.S. after landing in Chicago, but Toronto immigration lawyer Michael Niren told CBC News that officials may have made it clear he was unwelcome.

"Most likely what happened was the immigration officer at the border may have warned him that he would likely be denied entry, so he was allowed to withdraw," Niren said Tuesday. "Meaning he decided he’s not going to make a formal entry to avoid the risk of being formally refused."

Niren said Ford could be inadmissible to the U.S. given his admission of drug use, even though he has never been charged in Canada.

"It’s still enough for U.S. officials to deny his entry based on a reasonable belief that he’s possessed and or used drugs."

Niren said the incident raises questions about whether Canadians seeking substance abuse treatment in the U.S. may face problems at the border.

"If a Canadian admits to a border official that the purpose of their visit is to attend a rehab clinic, it’s going to raise issues of whether or not the Canadian has been convicted of a drug offence or committed an act that will result in a finding of inadmissibility. And it’s discretionary as to whether or not the officer can bar him. The admission of the purpose of going to the U.S. for rehab could result in a refusal."

Niren said he has never encountered a case like that, but has had many cases where individuals have been refused admission because there has been a suspicion of illegal drug activity, even without a conviction.

"You have to be truthful. You have to disclose the purpose of your entry to customs officials. And if you don’t, you’re making a misrepresentation and you could be barred for five years on the spot."

One audio recording captured the mayor ranting and making lewd comments about Coun. Karen Stintz. A video viewed by Globe and Mail reporters showed the mayor smoking a substance that a source told the newspaper was crack cocaine.

The new revelations prompted Ford — who is running for re-election in the Oct. 27 municipal election — to take a leave of absence from both the campaign and his duties as mayor.

More than 50 other candidates are seeking his job, including Stintz.

A statement from Ford issued on Thursday said he was taking the leave to deal with his "problem with alcohol," which Ford said he has struggled with "for some time."

Last week, CBC confirmed Ford flew to Chicago from Ontario's Buttonville airport, but his next stop was never revealed.

His family has said Ford, who will turn 45 later this month, is in rehab at an undisclosed location.

Deputy Mayor Norm Kelly will serve as mayor while Ford is away.

The story of Ford's alleged drug use has enveloped the mayor's office for nearly a year, after reports emerged last year that someone had been shopping a tape showing him smoking crack cocaine.

For months, Ford denied both using crack cocaine and the tape's existence.

Last October, Toronto police said they had obtained a copy of a video file that was consistent with what the media had reported. Within a week, Ford admitted that he had indeed smoked crack cocaine.

The story of the mayor’s alleged drug use drew attention from media around the world, as did a handful of other videos of Ford acting strangely.

Ford’s notoriety even led U.S. late-night comedian Jimmy Kimmel to invite the mayor on to his show.

Ford was elected as mayor in October 2010. Prior to that, he served 10 years as a city councillor, representing a ward in Etobicoke.

With files from the CBC's Dave Seglins