Mayor Rob Ford continues on a campaign-like clip this week, touting Toronto's economic gains on Thursday and today releasing a video featuring highlights of his summer. 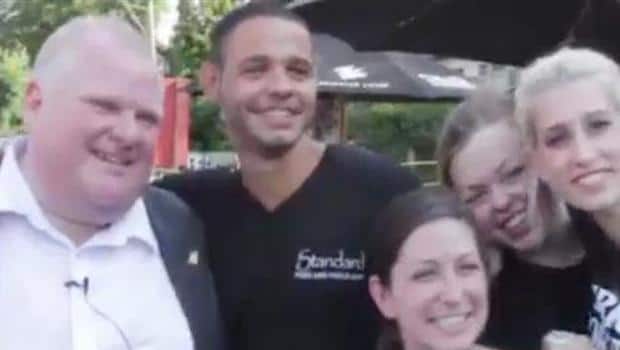 7 years agoVideo
2:11
Toronto Mayor Rob Ford released a video featuring highlights of his summer -- but didn't include any controversial moments 2:11

Mayor Rob Ford continues on a campaign-like clip this week, touting Toronto’s economic gains on Thursday and today releasing a video featuring highlights of his summer.

The video, titled ‘Summer of Ford’, was uploaded to YouTube and sent out on his Twitter account. It features segments of Ford fishing with Mississauga mayor Hazel McCallion, arm wrestling Hulk Hogan and meeting people at the Taste of Little Italy (before a drink was thrown at him).

His brother, councillor Doug Ford, and his vehicle, a Cadillac Escalade, make cameos in the video.

The short clip was produced by Toronto firm Ossington Creative, and features music by Nova Scotia singer Brendan Croskerry. Croskerry worked for the small production company that made the video and now works in the mayor’s office as a special assistant.

The mayor's office says they ran video by the Integrity Commissioner, "who was fine with it."

The song, titled Lil Dreamer, appears to have little to do with the mayor or his work at city hall. "You are a little dreamer / moving up in the world like a window cleaner" is one refrain from the song.

Ford has twice given speeches touting the city’s economic gains this summer.

In August, he spoke at the Cambridge Club, a fitness and lifestyle club for corporate executives, and urged its members to support him during the next election. He spoke on the city's economy and finances.

This week he spoke at the protocol lounge at City Hall, with a city of Toronto logos as his backdrop, and repeated his focus on job creation and finding efficiencies in municipal government.

"I was elected on a promise to create jobs, and that’s exactly what I’ve done," he said.