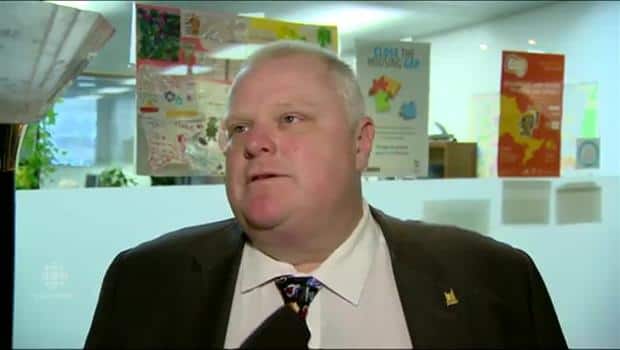 6 years ago
0:59
Coun. Rob Ford says he wouldn't want to see anyone fired over looking at his medical records. 0:59

Ontario's Information and Privacy Commissioner Brian Beamish has referred two names to the attorney general "for prosecution relating to the unauthorized access of Toronto city councillor Rob Ford's medical records at the University Health Network in January 2015," a spokesperson for the commissioner said.

Attorney General Madeleine Meilleur acknowledged receiving the referral and said an investigation will take place to decide if charges should be laid.

Ford was diagnosed with liposarcoma last September. A series of alleged privacy breaches have been reported since his diagnosis.

Two people gained "inappropriate access" to the then-mayor's medical records at Humber River hospital in October, due to what was called a "security lapse."

The hospital didn't say whether the individuals were staff members, but said "appropriate disciplinary action was being taken" against them.

For his part, Ford is not supportive of seeing anyone dismissed at the hospital.

"I don't want anyone to lose their job," Ford said, when speaking with CBC News on Wednesday.

He questioned what anyone would want to know about his health at this point, given that he has talked about it openly.

"I don't know what they want to know about me, but I think the whole world knows about my health condition," he said.

Ford, who will turn 46 this spring, had initially sought re-election as mayor, but withdrew from the mayoral race in the wake of his cancer diagnosis. Instead, he put his name on the ballot in Ward 2 and was elected as a councillor.

If found guilty, those alleged to have looked at Ford's records could be fined up to $50,000 each under the Personal Health Information Protection Act.