Rob Ford's brother Doug reassured the former Toronto mayor's supporters Wednesday that they will not be forgotten, as he delivered an emotional eulogy to a packed downtown church filled with supporters, family members and politicians. 'He's the mayor of heaven now'

5 years agoVideo
1:49
Stephanie Ford eulogizes her father alongside her brother Dougie and her mom. during her father's funeral 1:49

Rob Ford's brother Doug reassured the former Toronto mayor's supporters Wednesday that they will not be forgotten, as he delivered an emotional eulogy to a packed downtown church filled with supporters, family members and politicians.

"Rob, I'm going to miss you like crazy, I love you more than anything in the world," Doug Ford said as he stood before his brother's casket, which was draped in the city's flag. "And don't worry, Ford Nation will continue — continue respecting the taxpayers."

Hundreds of supporters joined the Ford family in walking the short journey from city hall to St. James Cathedral in downtown Toronto.

The city councillor and former mayor died of cancer last week at the age of 46. 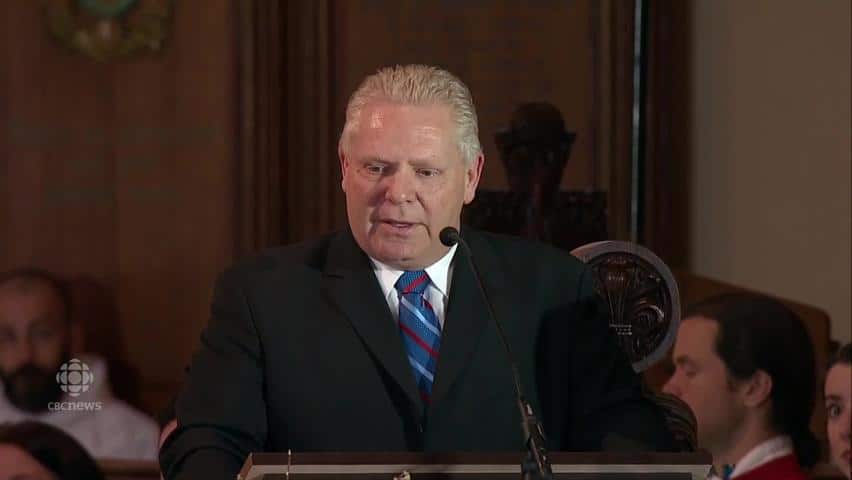 He began his eulogy with a message for his brother's wife, Renata, and their children, Stephanie, 10, and Dougie, 8.

"I know my dad is in a better place now. He's the mayor of heaven now," Stephanie told those gathered, with her mother and brother standing beside her.

"I remember at the hospital, he smiled at me and he said, 'Stephanie, I might not be here for too much longer,'" she said. "He said, 'I want you to remember that I always love you."'

Former Ontario premier Mike Harris was the first to speak at the funeral service.

"What a breath of fresh air he was at city hall," he said. "We're going to miss him."

The cathedral was briefly filled with sounds of laughter as speakers shared anecdotes. Doug Ford recalled a time when his brother delivered a sandwich to a constituent's home late at night, and called it "classic Rob Ford."

Clinton Leonard, a former player on the Don Bosco Eagles high school football team, also joked that Rob Ford, their former coach, would hide in the bushes to make sure the players didn't make mistakes.

"Coach was always about family and jelling as a unit," he said. "No one wanted to get that face red, so we behaved."

The burial service for Rob Ford was a private event, but members of the Ford family will host a public celebration of his life at the Toronto Congress Centre between 6:30 and 9 p.m.

Mourners gathered outside city hall early on Wednesday morning, before the family arrived to begin the procession to the church. Since Monday, Ford's body was lying in repose in the city hall rotunda, where family members received dignitaries and members of the public who wanted to pay their final respects.

The family invited members of the public to attend the funeral and join them in the walk to St. James Cathedral.

After Renata Ford arrived at city hall with her children on Wednesday morning, she blew kisses to the crowd of supporters gathered outside.

Liberal MP and former city councillor Adam Vaughan, who was one of Ford's loudest critics on city council during his time as mayor, said the day wasn't about politics. The day was to let Ford's family know that they have the support of their political family.

"I think Mike Harris said it well today: politics takes its toll on the home front, and he's left behind two young kids who lost a lot of their dad's time when he was around to politics, and now they've lost him forever," Vaughan told CBC News.

"As a political family you come together and say, 'Lookit, we respect and understand the hardships that you're going through, and we're here for you."

Most people would be surprised to learn that Ford was actually quite shy, Vaughan said, adding that he rarely had private conversations with Ford outside of council chambers.

Ford "built a brand" out of calling back constituents, and politicians can learn lessons from him, Vaughan said.

"He knew that you earned the job and you kept the job by helping people," Vaughan said. "And for that he's earned respect of a great many people and he deserves it."