Rob Ford will face a "public flogging" in Toronto city council tomorrow, according to his brother Coun. Doug Ford, as the embattled mayor again faces a call for him to take a leave of absence and apologize to the city.

Coun. Doug Ford says his brother is being subjected to a 'witch hunt' 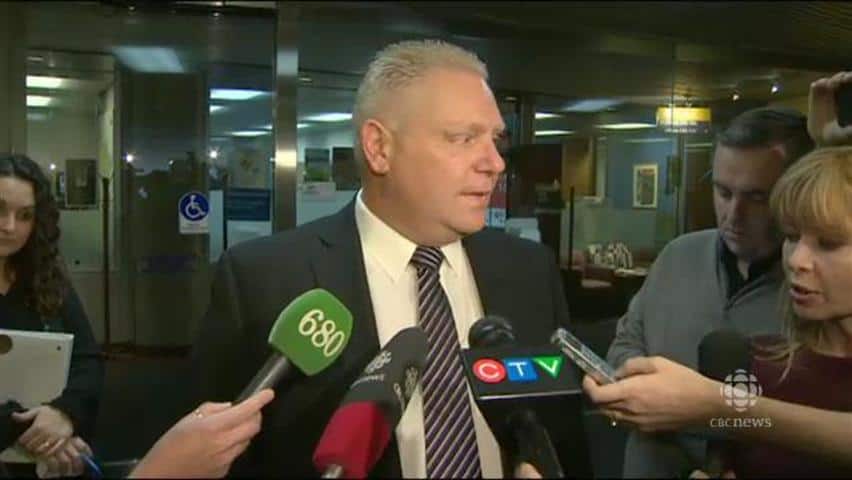 Rob Ford will face a "public flogging" in Toronto city council tomorrow, according to his brother Coun. Doug Ford, as the embattled mayor again faces a call for him to take a leave of absence and apologize to the city.

"This week is going to be very political with these councillors and we'll just have to get through it," said Doug Ford, describing the efforts against his brother as a "witch hunt."

The mayor faces a battle in council this week as a former ally, Coun. Denzil Minnan-Wong, leads a push for him to take a leave of absence after his admission he smoked crack cocaine. Minnan-Wong's motion also calls on Ford to apologize for "misleading" the city about the existence of a video that allegedly shows the mayor smoking crack.

Ford has said he won't resign or take a leave, telling a supporter as recently as Monday, following the city's Remembrance Day ceremonies, that he's "not going anywhere."

Coun. Ford spoke to reporters at Toronto City Hall on Tuesday, as hundreds of supporters and novelty-seekers lined up to purchase Rob Ford bobblehead dolls in the likeness of the mayor, sales of which will support the United Way.

Meanwhile, a judge in a Toronto courtroom on Tuesday afternoon was watching an alleged drug video of Ford, which has been widely described, but never released for the public to see.

Ontario Superior Court Judge Ian Nordheimer is weighing whether the video should be shown to lawyers for a man seen in a notorious photo with Ford.

The photo shows Ford posing with Mohammad Khattak, whose lawyers are in court Tuesday, and another man, who have both been charged in the drugs and weapons investigation Project Traveller. Anthony Smith, who was later shot and killed, is also in the photo.

Khattak's lawyers want access to the video, arguing their client's reputation is being harmed by being associated with it.

Judge Nordheimer ordered the Crown to bring the 90-second video to court Tuesday, which he subsequently viewed in a secure room in the courthouse on Tuesday afternoon.

Crown attorney Grace Hession David said last week she has seen the video, and it has no bearing on the case because Khattak is not seen or heard in it.

Khattak's lawyers, however, say they want to see it because they argue their client's and his family's reputations are being damaged because the photo in question has been incorrectly linked to the video.

Toronto police Chief Bill Blair has said police recovered two videos of the mayor, including one with images that corresponded with those that media outlets reported appear to show Ford smoking crack cocaine.

Ford denied for months that the video existed. More recently — amid his stunning admission to having smoked crack cocaine — he has called for its release so that the public can judge its contents.

Another video surfaced publicly last week in which an extremely agitated Ford said he wanted to kill someone. The context of the video and the target of Ford's anger are unknown.

Ford's friend and occasional driver Alexander Lisi was also in court in a separate case on Tuesday. He is on trial for extortion and a number of drug charges. The judge set a judicial pretrial date for the drug charges for Jan. 14.

It's believed the extortion charge is related to Lisi's efforts to obtain the purported crack video.

Ford, 44, has served as the mayor of Toronto for the past three years. He still has a year to go in his current mandate and has said he intends to seek re-election.