A police description of the infamous video of Rob Ford apparently smoking crack cocaine has been released by an Ontario Superior Court. 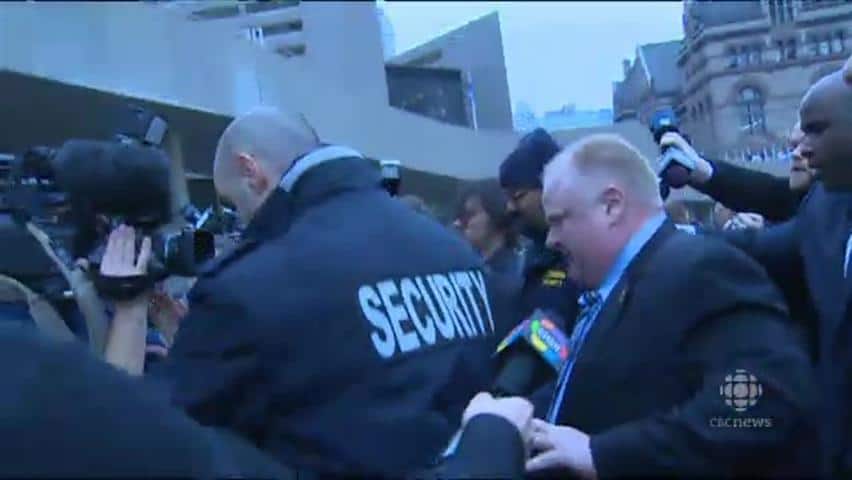 A police description of the infamous video of Rob Ford apparently smoking crack cocaine was released by an Ontario Superior Court on Wednesday.

Few new details are in the latest document release, but contains further description of what has been previously reported about the video of Ford apparently using crack.

There are five videos in total, with the first three described as failed attempts to film the mayor. The fourth video is a video of the mayor "consuming what appears to be a narcotic inside a residence."

The video, which police describe as one minute in length, ends with the mayor asking if the recording device is on.

The fifth video is Mohamed Siad, the owner of the tape, describing how to secretly film someone.

The description is in keeping with previous accounts of the crack tape. Police though added that Ford mentioned the name Liban, which matches a known drug dealer, Liban Siyad.

The previously sealed documents were from the Project Brazen 2 investigation, which included extensive surveillance on Ford's friend Alexander (Sandro) Lisi and by extension the mayor himself.

The documents are subject to a partial publication ban.

Police say the investigation is ongoing.

Ford is in the midst of a re-election campaign. First elected mayor in 2010, he is seeking a second term from voters in the October municipal election.

The document released by the court Wednesday provides an opportunity for Ford's rivals to pile it on.

Denzil Minnan-Wong, who is thought to be considering a run to replace Ford as mayor, also questioned Ford's bid for re-election.

"It appears we finally have information and the smoking pipe has been found," said the councillor and sometime Ford ally. "It's another piece of information that suggests the mayor was involved in using illegal drugs and illegal substances.

"It has implications for the mayor and whether or not he has the moral authority to lead in the city. We know that drugs are an important way that crime is financed in this city, and you can't go to the drug store and get these substances.  You're getting them from people who are involved in the drug trade and who are involved in crime," Minnan-Wong said.

Chow, considered a frontrunner in the race, echoed her dissatisfaction with a statement on the latest police documents.

"The on-going revelations about Mr. Ford again show why he’s no role model for our children," she said. "Our city is tired of the distractions and needs a new mayor."

Tory followed with a statement about productivity at city hall.

"It is time for us to move forward and elect a new mayor who will make Toronto more livable, affordable and functional," he said, employing one of his often repeated campaign refrains.

Soknacki issued a short statement that read: "Mayor Rob Ford must be replaced."