Coun. Doug Ford says his brother 'needs to go away for a couple of weeks' 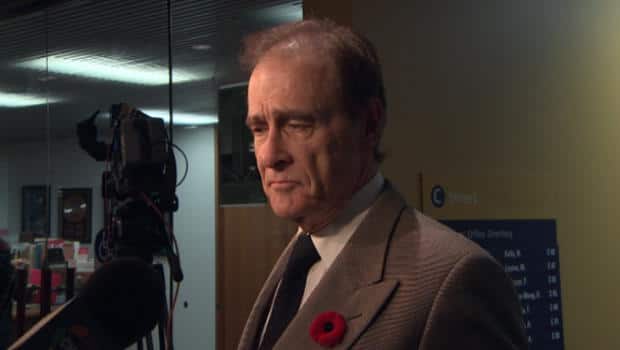 "We're hearing that he's prepared to take some downtime, not as much as people would like, but it's a start. I'd rather have that than defiant rejection," Kelly said Friday to CBC News.

"Most members of council would prefer a longer interlude, but even this incremental step indicates progress. I'd rather have that than nothing," he added.

Kelly's remarks follow those from Ford's brother, Coun. Doug Ford, who told a Toronto radio station earlier Friday that the mayor "needs to go away for a couple of weeks" in light of the mounting scandal at city hall and questions about the mayor's health.

Rob Ford was at city hall for roughly two hours on Friday — he was seen at one point getting a flu shot — and left shortly before 2:30 p.m. He addressed reporters briefly on his way out.

"Give me some personal time this afternoon," he said. "I'm dealing with a very serious personal issue right now."

"It's an option he has to consider and he will be considering," Morris said in a brief conversation with CBC News. "Whether he voiced it or not, I think that was always an option open."

Breaking his silence since the mayor revealed on Tuesday he has smoked crack cocaine, Coun. Ford said: "I've mentioned to Rob, maybe go away for a week, a couple of weeks, and get your mind together."

"I think Rob needs to go away," he added later, to get a "fresh outlook."

The fifth estate on Rob Ford

Tonight on the fifth estate, Gillian Findlay has more on the man who has become the world's most controversial mayor, and the real story behind the notorious video. "The Rob Ford Story" airs tonight at 9 p.m. ET, 9:30 in Newfoundland and Labrador.

Doug Ford's remarks come during a tough week for the mayor that also saw a video released showing him ranting, apparently while drunk. Rob Ford said Thursday after the video was posted by the Toronto Star that he was "extremely inebriated" in the video.

"I've done my best to advise Rob and it doesn't differ from other people's advice. Sometimes brothers keep things from each other," said Ford on radio station AM 640.

Rob Ford has so far resisted calls — from across the city and the political spectrum — to get help for his substance use by entering a rehab program.

Doug Ford did not mention rehab specifically but said his brother needs "support."

"Does he need support on that end?" he said, referring to the mayor's drinking. "Sure, I think he does."

"But does he go out and get hammered every single night? No," he added.

"Don't kid yourself, there are a lot of politicians in this country … that have a lot worse drinking issues than Rob Ford."

The councillor said the mayor's political opponents want him out of the way before the municipal election, next fall. Discussions about the mayor taking a leave of absence tend to focus on Florida, where Ford has vacationed in the past.

"What they want to do once he's down there, they want to kill him, because they know if he gets back on his feet, and starts moving forward and gets his life together, they know they'll have one heck of a battle," he said.

"If Rob goes away on a little vacation, a week, two weeks, comes back, loses 50 or 60 pounds, and stays on the straight and narrow … it will be very tough to beat Rob Ford," he said. Later he conceded that a proper recovery would more likely take months.

Rob Ford has said he kept his drug use secret from his brother.

"You're going to say he wasn't honest — on a personal level, sure — sometimes brothers keep things from each other. But I'll tell you, and I'll stick by this till the day I am pushing up tulips, that man is the most honest politician in the country when it comes to taxpayers' money," Doug Ford added.

Elsewhere on the dial, Toronto radio station CFRB 1010 said Friday says it will no longer air The City With Mayor Rob Ford, his weekly two-hour program.

The station said the move to end the show, which first aired in early 2012, was a mutual decision.

With files from CBC's Dave Seglins