After swearing off alcohol, mayor admits to drinking 'a little bit' on Monday night 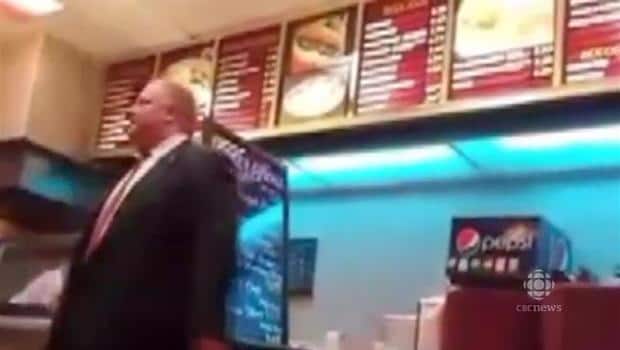 At the Steak Queen restaurant at 345 Rexdale Blvd. in Etobicoke, Ford is seen standing at the service counter speaking to a group of people, some of whom appear to be restaurant staff.

Throughout much of the minute-long video, titled "New Video of Toronto Mayor Rob Ford Drunk, Swearing in Jamaican Patois," Ford attempts to use Jamaican slang, using the word "bumbaclot" — profanity in patois — at least four times.

The mayor admitted he was drinking alcohol.  "A little bit, yeah," he told reporters. He had pledged numerous times he does not drink anymore, after revelations in 2013 of his crack use while in office.

When asked if his Jamaican accent was offensive, he said no. "I met some friends. If I speak that way, that's how I speak with some of my friends and no, i don't think it's discriminative at all," he said. "It's my own time."

Ford would not say who drove him to the Steak Queen.

Toward the end of the clip a bystander says, "This guy deserves to be better than Stephen Harper." Ford replies, "I am a straight-up guy. Who goes to TCH, James Town, and Jane and Finch?"

The video ends with Ford getting takeout food, saying "I'm a straight-up guy," while staff compare him to Prime Minister Stephen Harper.

Reporters showed the video to Coun. Doug Ford and questioned him about it on Tuesday.

“I’m not too sure what this video is about,” he said.

After watching a portion of the video on a cellphone, Coun. Ford said that it was “obviously” the mayor though he didn’t think it was recorded on Monday evening.

Coun. Michael Thompson said he found the video “offensive,” also telling reporters that it was “another sad chapter” involving the mayor.

Coun. Joe Mihevc said the video made him more anxious for election day, when voters can "sweep" the mayor from office. "He continues to be an embarrassment to the city of Toronto," said Mihevc.

Hours after the video appeared, a second one surfaced on YouTube (see below) that shows Ford and a man that is believed to be Alexander (Sandro) Lisi, sitting together at what appears to be the same Steak Queen restaurant as seen in the initial video.

Tim Stewart, the YouTube user who uploaded the video titled "FORD was there," commented that he saw Ford, the mayor was not drunk but rather "sitting with a friend and respectable. Not sure how long he stayed though."

Stewart does not state exactly when the video was recorded, though he implies it was on the same day as the first video.

CBC has not verified the authenticity of the video.

Lisi, described as a close friend of the mayor as well as his former occasional driver, was arrested at a strip mall in October 2013 and charged with possession and trafficking of marijuana, conspiracy to commit an indictable offence and possession of the proceeds of crime. Shortly after, it was learned he had also been charged with extortion. He was released on bail on Nov. 1.

There are at least nine references to the Steak Queen location in the police affidavit surveillance documents of Lisi and Ford released released months ago.

Ford, 44, is running for re-election this fall, seeking a second term in office as Toronto's mayor.

His three-plus years in office have been controversial, with the mayor often finding himself under scrutiny for his work at city hall and his private life.

Last spring, reports emerged that someone had been shopping a video of Ford, showing him smoking what appeared to be crack cocaine.

Ford denied the reports for months, but Toronto police revealed in October that they had obtained a video file that was consistent with what the media had reported.

Amid these admissions and related apologies, city council moved to limit some of the mayor’s powers, a move that infuriated Ford who compared the situation to when Iraq invaded Kuwait.

A few days after the mayor admitted to smoking crack cocaine, a bizarre video surfaced showing Ford ranting and swearing.

The video, which the Toronto Star paid to obtain, included footage of the mayor talking about wanting "to kill" someone.

Ford said he was "extremely, extremely inebriated," though he did not explain the circumstances under which it was recorded.

Ford’s drug-related scandal made headlines around the world and drew foreign reporters to Toronto City Hall as the details trickled out.

Prior to being elected mayor in 2010, Ford had served as a city councillor for a ward in Etobicoke, the Toronto suburb where he lives with his family.