Risk factors, red flags: How advocates are trying to prevent domestic homicide in the GTA

Before her sister Alicia was killed in 2018, Natalie Lewandowski witnessed relationship "red flags." She's now among those ringing alarms about the warning signs of domestic homicide, which experts say point to the need for more prevention efforts in Toronto and beyond to protect victims. 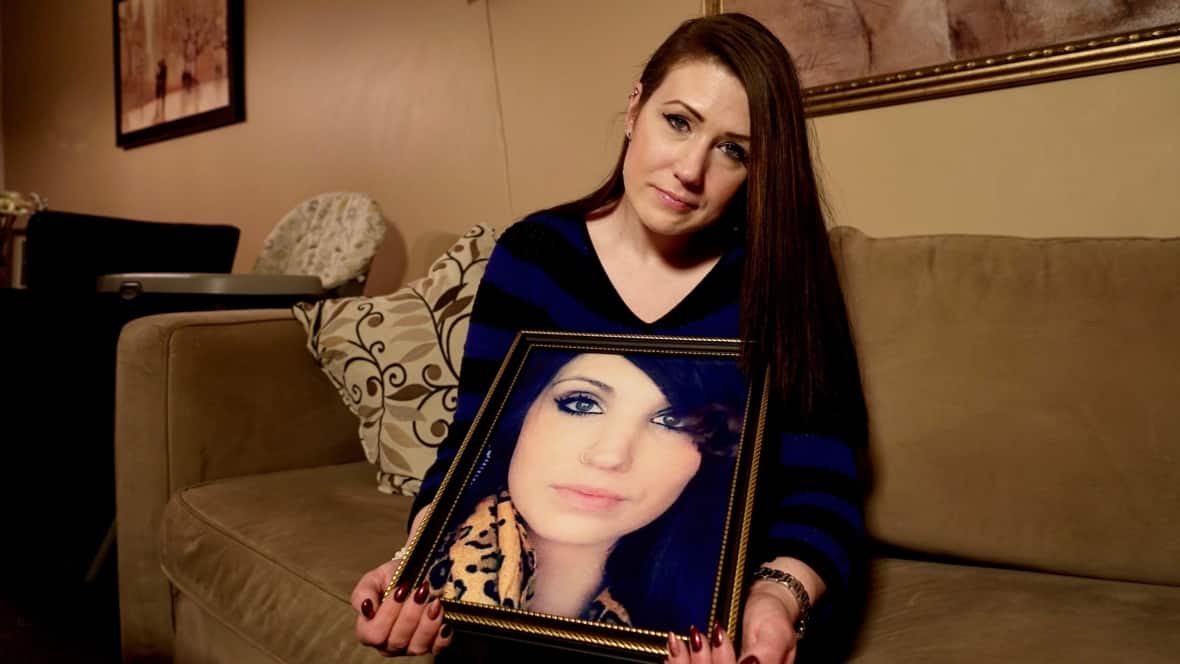 My sister was killed two years ago. Her boyfriend has been charged in her death

11 months agoVideo
5:02
WARNING: This story contains graphic and disturbing content. Natalie Lewandowski’s sister Alicia was shot and killed two years ago today at the age of 25. Natalie says she believes there were clear warning signs suggesting it was an unhealthy relationship. She’s hoping sharing her story will help others. 5:02

Natalie Lewandowski will always remember Monday, March 5, 2018 as the worst day of her life.

The weekend before, she'd seen her younger sister Alicia for the first time in months.

The 25-year-old was increasingly isolated from her family — amid what Lewandowski says was an unhealthy, controlling relationship with her boyfriend of three years — and promised her loved ones that she was going to break things off for good.

Alicia also made plans to go for a manicure with Lewandowski, but later cancelled after she and her boyfriend got into an argument.

It all weighed on Lewandowski's mind that Sunday evening. She tried calling Alicia's phone. Her sister never answered. She tried again. Her sister's phone seemed like it was turned off.

Around 5 o'clock the following morning, Lewandowski got a call from their mother, who started blurting out horrifying, piecemeal details: Alicia. Resuscitation. Paramedics.

Lewandowski later learned her younger sister — a bright college student who once travelled to multiple late-night supermarkets in search of cinnamon buns to ease one of Lewandowski's pregnancy cravings — had been shot in the visitor parking lot outside their mother's home.

Alicia died soon after, and her boyfriend at the time, Joseph Chang, has been charged with first-degree murder. His trial is scheduled to start in May.

Sitting in her living room a few days before the two-year anniversary of her sister's death, Lewandowski says she believes there were clear warning signs.

"When I started to see red flags, obviously I voiced my concerns to her," Lewandowski recalls. "And she also saw these red flags."

Despite trying to leave the relationship, Alicia wound up becoming one of the 86 Canadians who allegedly died as a result of intimate partner violence in 2018.

Homicides were much more likely to occur between current, long-term partners, with Statistics Canada data showing 60 per cent of spousal homicides in Canada are preceded by a history of family violence.

Experts say those trends point to a clear need for more prevention efforts, including a new GTA pilot project to protect high-risk victims in situations where homicide is often the final, predictable piece in a pattern of violence.

In 2018, the same year Alicia was killed, 10 other women also died across the Greater Toronto Area as a result of intimate partner violence.

According to CBC News' analysis, five of the 11 victims were assaulted or in abusive relationships before they died.

Court documents suggest a Mississauga mother of two, Linda Santos, was one of them.

In 2017, her husband Ross Inberg assaulted her and was found guilty that December. After being given a conditional discharge, he was on probation for nine months. Santos was killed in November 2018, allegedly strangled by Inberg. He killed himself shortly after.

Ajax mother of three Krassimira Pejcinovski was also allegedly strangled to death. Friends of Pejcinovski say they were concerned about her ex-boyfriend Cory Fenn's "controlling behaviour" during their relationship. He's since been charged with three counts of second-degree murder, as he also allegedly killed two of her teenage children.

Given the common warning signs before domestic violence winds up escalating to deadly force, experts believe it's a form of homicide that can be predicted — potentially saving victims' lives.

"We can have a proper system in place whereby she can actually make a choice of leaving either temporarily or permanently to get to some kind of safety," says Deepa Mattoo, executive director of the Barbara Schlifer Commemorative Clinic in Toronto, an organization that offers counselling and legal services to marginalized women who have survived violence.

Domestic homicide is a preventable crime, Mattoo adds, if there is a proper assessment of victims' experiences and risk.

Women need accessible places like libraries, schools or doctors' offices where private conversations about their abuse can take place, coupled with more education for front-line workers in spotting and addressing abuse, she says.

According to Farrah Khan, a nationally recognized advocate and educator on sexual violence, prevention lies in recognizing warning signs early on in others, like when friends stop showing up at community events or start looking to their partner when making any decisions.

"Check in on people and don't feel embarrassed about it," says Khan, who is also manager of Ryerson University's Consent Comes First program in the Office of Sexual Violence Support and Education.

"We need to make this more of a conversation."

In Toronto and the surrounding region, there are a variety of supports in place for people enduring domestic violence, from counselling and legal services to shelters for victims fleeing violence at home.

What's largely been missing, according to Lieran Docherty, program manager for the Woman Abuse Council of Toronto, is an approach that brings all the stakeholders to the same table, from local services to police to the victims themselves.

With that in mind, the organization is in the midst of launching a pilot project for a Multi-Agency Risk Assessment Conference, a team-based, multi-agency approach to reducing high-risk domestic violence.

"We know, based on research into domestic homicide, there are identifiable risk factors," Docherty says.

"Separation, increased frequency in violence or severity, pending separation, particularly if there are children involved, a woman is at greater risk if she is pregnant … If there are more risk factors, there is a higher risk of domestic homicide."

The pilot project aims to have a roundtable approach up and running in one Toronto neighbourhood and a GTA rural community by the summer of 2020.

It works by bringing together groups to share information on high-risk domestic violence cases, according to Docherty, and based on the level of risk and the needs of the victim, professionals can then develop a customized safety plan, connecting the dots between basic support services, the justice system, counselling, and housing agencies.

More than 40 per cent of survivors whose cases were supported by the roundtable approach suffered no further abuse after a year, one U.K. organization found, while those who did face further violence wound up reporting it at a much earlier stage than had previously been the case.

Now used in more than 250 communities across the United Kingdom since being developed in the early 2000s, and later adopted in Finland, Switzerland and Australia, there's growing hope the approach will be one more tool in the GTA's arsenal to fight domestic violence — at least for the time being, thanks to five years of federal funding.

Experts working in the domestic violence field say more innovation and long-term funding commitments are essential to reducing domestic violence, which keeps trending upward despite country-wide efforts to curb it.

For Lewandowski, it's impossible to forget the pain of losing her beloved sister. She now believes more resources should be in place to help women fleeing violence, including having help lines and support groups available for women to better understand the differences between healthy and unhealthy relationships.

She also wonders if her family's tragedy, and her newfound insight into the potential warning signs of domestic homicide, could help others — even if it was too late to help Alicia.

Verbal abuse, controlling behaviours, isolation from someone's friends and family — Lewandowski says they're all signs a relationship isn't in a healthy place.

"I want to go out to schools and speak out," she adds. "And be my sister's voice."

If you need help and are in immediate danger, call 911. To find assistance in your area, visit sheltersafe.ca or endingviolencecanada.org/getting-help.

If you're worried someone you know may be experiencing intimate partner violence, here are some warning signs, according to the Canadian Red Cross: