Six Canadian military members killed in last week's helicopter crash off the coast of Greece were honoured at a repatriation ceremony in Ontario on Wednesday.

Defence Dept. asked Canadians not to gather along Highway of Heroes as motorcade headed to Toronto

For years, Cpl. Simon Pittarelli would end every phone conversation with his sister, Sub-Lt. Abbigail Cowbrough, with "I love you."

That means more to him now than ever, as Cowbrough was one of six Canadian military members killed in last week's helicopter crash off the coast of Greece who were honoured at a repatriation ceremony in Ontario Wednesday.

In the end, that "I love you" marked Pittarelli's final words to his sister.

"It kind of proves even more that every person you talk to that's meaningful to you, you should always end the phone call with an 'I love you,'" he told CBC News.

A long line of family members, some holding flowers and walking with children, stood in groups during the ceremony. Others dabbed at their eyes with tissues. Trudeau met privately with families before the proceedings began to express his condolences.

Cowbrough's casket, which was draped in the Canadian flag, was slowly carried out of a CC-177 Globemaster by fellow military members while the mournful sound of bagpipes played. Her family then gathered next to a hearse after the casket was placed inside.

On April 29, a CH-148 Cyclone crashed in the Ionian Sea while taking part in NATO exercises. Defence officials have said it was returning to HMCS Fredericton at the end of a NATO training mission.

The remains of Cowbrough, who was a naval officer, were subsequently recovered. The other five service members on board are missing and presumed dead.

The remains of one other person have been recovered but not yet identified.

Because their bodies haven't been found, the five missing service members were represented at the ceremony by different military service caps, depending on whether they were members of the Royal Canadian Navy or Royal Canadian Air Force.

Military members carried those caps off the plane, much like Cowbrough's casket, before placing each of them inside waiting hearses.

The families then gathered one by one next to the empty hearses, embracing each other and crying. 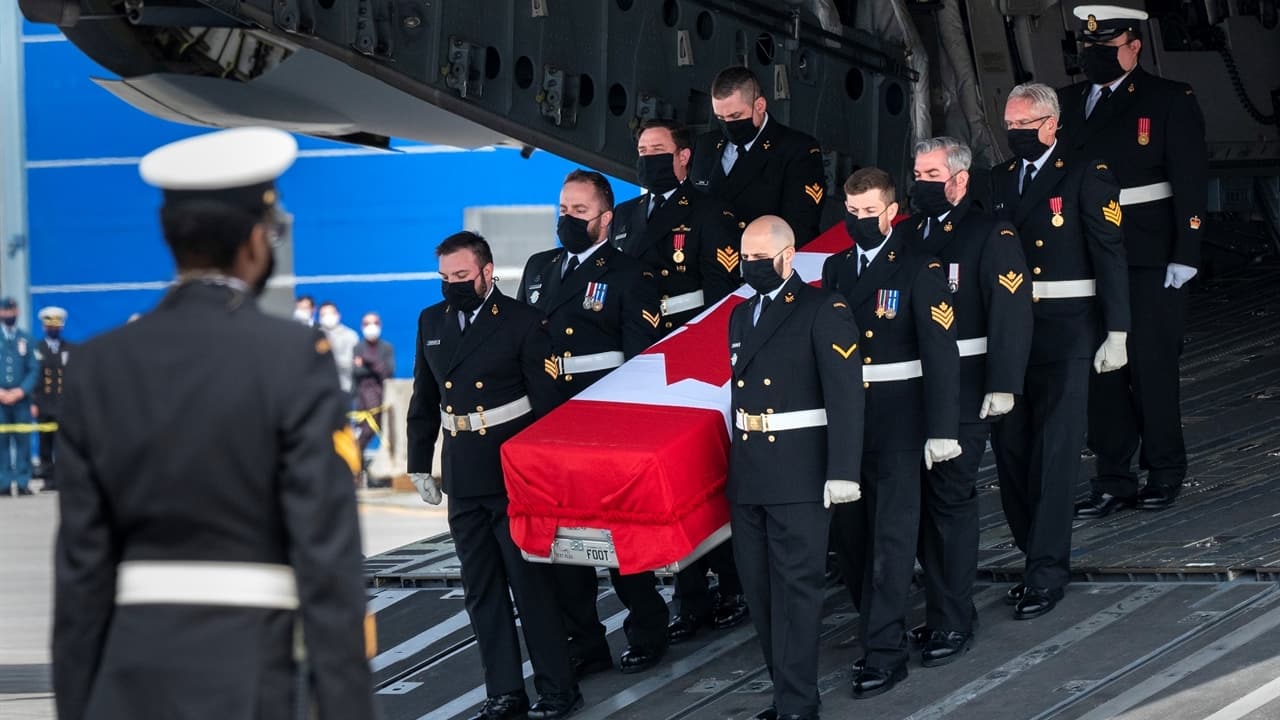 6 months ago
1:59
A repatriation ceremony for six military members killed in a recent helicopter crash was held at CFB Trenton on Wednesday.   1:59

Earlier in the week, the Department of National Defence said Canadian Armed Forces members, with the exception of pallbearers, would practise physical distancing at the ceremony to protect the health of those in attendance.

"Despite the challenges presented by the current COVID-19 environment and the need to maintain physical distancing, 8 Wing/CFB Trenton is committed to a dignified and respectful repatriation for our fallen aviators and sailors," the department said in an email on Tuesday.

Cowbrough was a marine systems engineering officer on the HMCS Fredericton and had lived in Dartmouth, N.S., for much of her life.

Pittarelli said he's going to miss his "big sister," who people often said was a "beautiful, vibrant" woman with a smile you couldn't help but notice.

Growing up, if their mom was out of the house, Cowbrough was in charge.

"She definitely was a fitting person to become an officer," he said. "She took charge, she gave orders … she was definitely an older sister for sure."

Retired major Tim Dunne, a 32-year veteran of Canada's Armed Forces, told CBC News it's an incredibly difficult time for those in the military.

"These people become another family for you. When you see a situation like this, it brings home the fact that when people serve together, their relationship becomes very, very hard-formed," he said.

"Canada will be a lesser place without them."

Following the ceremony, a motorcade with the hearses left and drove along Highway 401 heading to Toronto, where a coroner's examination will be conducted.

A portion of Highway 401 is called the Highway of Heroes to mark the road that soldiers killed in action in Afghanistan travelled between CFB Trenton and Toronto in their final journey home.

When the bodies of soldiers are repatriated, people often line the overpasses of the highway to pay their respects. This time, officials asked people not to gather because of the pandemic — though footage from near the base showed small groups of people still did, with some brandishing Canadian flags.

"For those who may feel it necessary to have a physical presence at roadside or overpasses along the Highway of Heroes, we ask that you join us in respecting COVID-19 restrictions and practice physical distancing while paying respects," the department said.

Pittarelli said it "sucks" that people aren't able to show their support in the way they normally would, but it's "what we have to do."

It's still not clear what caused the CH-148 Cyclone to crash, but the helicopter's flight data recorders were found in the debris and will be analyzed at the National Research Council in Ottawa.

With files from the CBC's Muriel Draaisma and The Canadian Press